Kligerman was shuffled back on final restart at Daytona 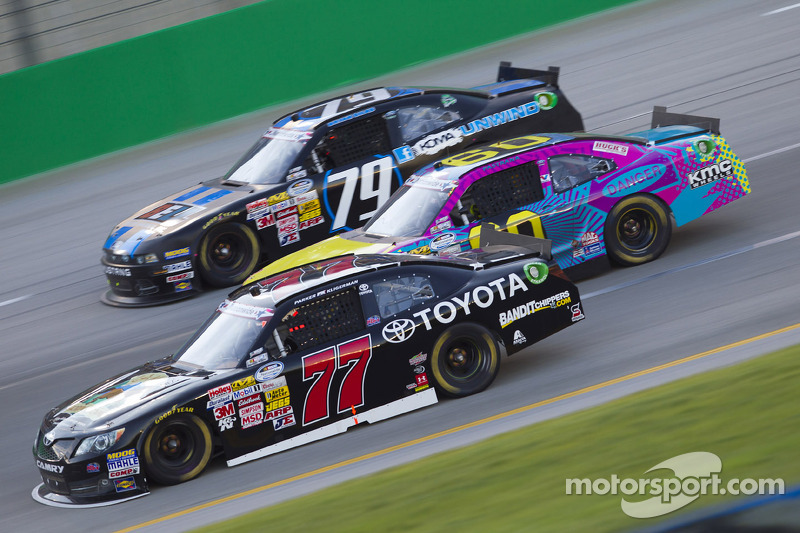 After starting from the rear of the field and going a lap down before the halfway mark of the Subway Firecracker 250 at Daytona (Fla.) International Friday night, it was a long road to the front of the field for Parker Kligerman and his Bandit Chippers Racing team. 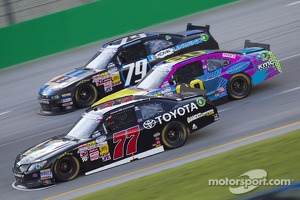 After getting the "Lucky Dog" on lap 47 of the 100-lap event, Kligerman had maneuvered his way up to the fourth spot when a late caution set up a green-white-checkered finish.

The talented youngster felt like he was in the perfect spot to bring home his first Nationwide Series victory, but shortly after the green flag waved the No. 77 Camry became disconnected from his tandem partner, the No. 3 car of Austin Dillon, and began shuffling backwards.

When the field took the white flag he had subsided to the 24th position, but was able to regain six spots on the final lap and ended the night with a disappointing 18th-place finish.

"The Bandit Chippers Camry was fast and we fought back from a bad start to the day -- getting caught a lap down during that long green-flag run after starting from the back and not having a partner to draft with," Kligerman said.

"Once we got back on the lead lap and found some partners to work with, we got back to the front very quickly. Hooked up with the 3 car of Austin Dillon and we were in a position to win, but just had a bad restart at the end."

After being third fastest in the opening practice session on Thursday afternoon and fastest in final practice later that evening, the Bandit Chippers Racing team had high hopes entering Saturday's event.

After qualifying third for the season-opening race at the 2.5-mile tri-oval in February the team expected to qualify inside the top 15 again, but were only able to muster the 27th starting spot.

Crew chief Eric Phillips wondered if his Toyota had a mechanical issued and decided that with already having to start towards the back that he would relinquish that spot and have his crew give car a thorough look-over for and accept the penalty of having to star at the rear of the field. No issues were found and the team made its final preparations for the race.

Once the green flag dropped, Kligerman had a hard time finding a drafting partner and lost the lead pack quickly. On lap 20, he had only advanced up to the 31st position when he connected with the No. 98 car of Kevin Swindell. The two quickly made up for lost time and by lap 30 were inside the top 25 as teams prepared for their first scheduled pit stop.

The plan was for the two cars to pit in unison on lap 33 and be able to tandem draft again when they returned to the track, however, a lap car got in the way and when Swindell came down pit road, the Bandit Chippers Camry didn't have a clear path and elected to stay on the track for one more lap.

Problems compounded when the Kyle Busch Motorsports over-the-wall crew was unusually slow administering a right-side and fuel stop and Kligerman had problems getting out of his stall. He returned to the track just in front of the leaders and within two laps was a lap down.

Connecting with the Jamie Dick, also a lap down, the Connecticut native was able to keep the leaders in sight. Debris on the track brought out the first caution of the race on lap 48 and the No. 77 Toyota returned to the lead lap as the recipient of the "free pass."

With being the "Lucky Dog" and having start at the rear of the field, Phillips summoned his young driver to pit road for four fresh tires, a full load of fuel and a major chassis adjustment. Kligerman took the lap-52 restart from the 26th position and set his sights on getting back to the front of the field.

He was scored in the 20th position when fluid on the track slowed the field for the second time. With tire wear proving to be minimal, Phillips called for a fuel-only stop and the team gained two spots for the subsequent restart on lap 77.

Knowing that time was of the essence, the talented youngster began his march to the front of the field. Within 10 laps he had maneuvered his way into the top 10 for the first time and when a stalled car brought out caution number three on lap 90, the Bandit Chippers Camry was scored in the sixth position.

Having worked in tandem with Dillon successfully in the opening practice session, through communication with their teams the two made a plan to work in tandem for the closing laps.

When the race restarted on lap 93, Kligerman connected to Dillon's back bumper and by the time the field returned to the start-finish line the two were scored third and fourth, respectively.

With five laps to go, the two had a run to the outside of the lead tandem of Matt Kenseth and James Buescher when "the big one" broke out in the middle of the pack and brought of the fourth and final caution of the event. The field was red flagged for nearly 10 minutes and set-up a green-white-checkered finish.

The final restart came on lap 99, with Dillon second and Kligerman fourth. The two connected upon initial restart, but as the field approached Turn 1 became disconnected and packs of cars surrounded them, inside and out. By the time the field took the white flag, dreams of his first Nationwide Series win had diminished and left the Bandit Chippers driver scrapping to muster a top-20 finish.

Kenseth picked up his first Nationwide Series victory of 2013 and the 27th of his career. Buescher finished 0.89 seconds behind him in the runner-up spot. Elliott Sadler and Kurt Busch finished third and fourth, respectively. Dillon made a miraculous last-lap push to come home fifth.