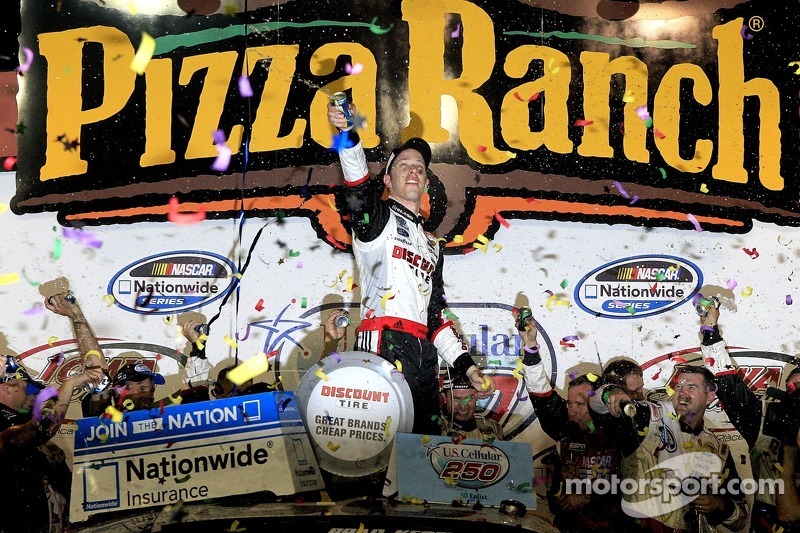 The No. 22 Penske Racing Ford of Brad Keselowski made his way up through the race field to take the lead with 36 laps remaining in the 250-lap U.S. Cellular 250 NASCAR Nationwide Series race at Iowa Speedway in Newton on Saturday and drove on to the win. It was his third win of the season and his second victory at Iowa. Penske teammate Sam Hornish Jr. in the No. 12 Ford finished second to give car owner Roger Penske a one-two finish. The No. 20 Joe Gibbs Racing Toyota of Brian Vickers finished third.

"It was a good night, good job for Penske Racing," Hornish said. "Really proud of what we were able to do."

Although Keselowski ended the evening with a victory lane celebration and improved his average Iowa finish to 2.25 in four Nationwide starts at the track, the race was far from flawless for the Sprint Cup Series regular. Keselowski raced his way up to third early in the race, but a pit road penalty for a tire outside his pit box during the first caution of the race on lap 55 sent him back to 22nd on the restart.

Keselowski then worked his way back toward the front, climbing back inside the top-10 by lap 120. The charge toward the front seemed to be all for naught, though, a few laps later when he lost some of the positions he had gained because of an overheating issue. After a slow pit stop for repairs during the next caution that came out on lap 141, Keselowski restarted outside the top-10.

"They just didn't give up," Keselowski said of his team. "They just kept fighting, kept working on it."

As Keselowski was having his troubles, the No. 3 Richard Childress Racing Chevrolet of Austin Dillon was dominating the race. Dillon took the lead from the No. 7 JR Motorsports Chevrolet of Regan Smith on lap 86 and began to pull away. By lap 114, he had a cushion of more than three seconds over second-place Smith. That margin was erased by the lap 141 yellow flag, but when the race returned to green, Dillon pulled away again, leading by more than four seconds by lap 172.

After leading a race-high 116 laps, Dillon lost his lead during the third caution of the race that came out with 50 laps to go. The No. 6 Roush Fenway Racing Ford of Trevor Bayne, Vickers, the No. 11 Joe Gibbs Racing Toyota of Elliott Sadler and Smith each took two tires during the caution to restart the race in the top-four spots. Dillon restarted fifth after taking four tires. Keselowski was also among those who took four.

While Keselowski was able to charge toward the front, along with Hornish, Dillon was unable to make up much ground. He did increase his position by one in the closing laps to finish fourth. Vickers took the lead on the restart, and a few laps later, Keselowski was right behind him in second. Keselowski then moved into the lead about five laps later.

The yellow flag waved one more time on lap 223. When the race restarted, Hornish got by Vickers to take second, putting Penske cars first and second in the running order.

The No. 32 Turner Motorsports Chevrolet of Kyle Larson finished fifth. Pole sitter Drew Herring was sixth in the No. 54 Joe Gibbs Racing Toyota, the No. 99 RAB Racing Toyota of Alex Bowman finished seventh and Sadler was eighth. The No. 33 Richard Childress Racing Chevrolet of Ryan Gifford, who was making his Nationwide Series debut, finished ninth, and Bayne rounded out the top-10.

Fellows to drive for JR Motorsports at Mid-Ohio