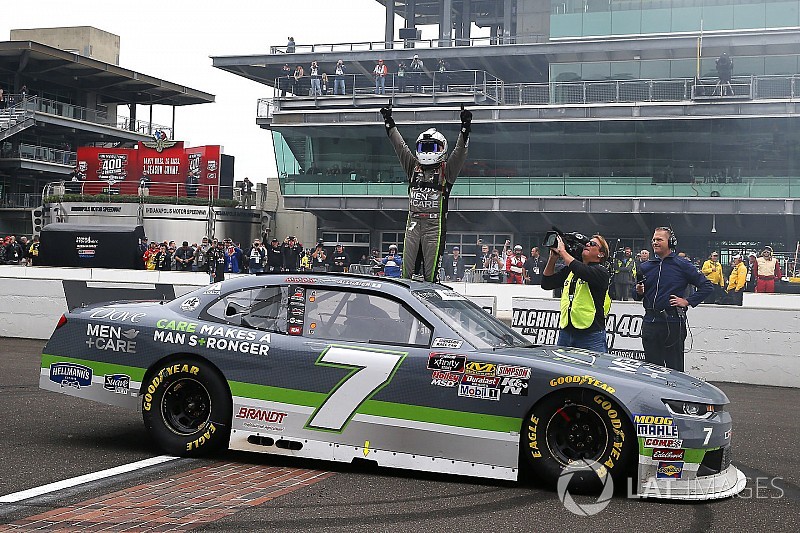 Allgaier held off Reddick at the line by 0.092 seconds with the top five finishers all within a second of the leader. It was Allgaier's fifth NXS win of the 2018 season and his first the famed circuit.

Allgaier passed Chase Elliott on the final restart of the race on Lap 84 and never looked back, winning after leading a race-high 41 laps in the event.

Allgaier was strong throughout the entire race, leading a majority of the first stage and remaining in the lead pack for most of the 100-lapper.

The top six cars snaked around in a single pack for final 15 laps after the race was stopped for nearly 10 minutes to repair a tire barrier struck by Ryan Preece in the final caution of the race.

“I used to come here and stand in the grandstands and watch the Brickyard 400 and this one is for my dad,” said Allgaier. “He used to drive me up here to Brickyard Crossing every Wednesday night to help me become the best driver I could be ... this is awesome.”

Allgaier led the way early in an action-packed first stage. Allgaier was fast from the start, taking the lead from pole-sitter Blaney on the opening lap and leading the majority of the stage. Blaney fell back to ninth, struggling on the bottom of the track.

Since the teams got no practice or qualifying for the cars and rain drenched the track throughout the weekend, a competition caution was given to the field on Lap 10.

Custer and Ty Dillon opted to pit for tires prior to the caution, giving the duo track position on the following restart on Lap 14. Allgaier and Dillon swapped the lead twice with Allgaier retaking control on Lap 18.

The stage was slowed three times due to cautions with Dillon and Elliott Sadler bringing out the final caution. On Lap 22, Dillon spun sideways while in the middle of a three-wide situation entering Turn 3, collecting Sadler while they were running fifth and seventh, respectively. Spencer Boyd and Austin Cindric both suffered significant front-end damage in the incident when they were forced to drive through the wet grass.

Brandon Hightower also spun and brought out the second caution of the race on Lap 19.

The stage ended with a one-lap shootout and in a sign of things to come, John Hunter Nemechek edged Preece to win Stage 1 in a four-wide photo finish with Allgaier and Cole Custer. The top four cars were separated by just 0.036 seconds at the line.

Tifft was fifth with Elliott, Jones, Reddick, Hemric and Austin Dillon rounding out the top-ten.

Tifft led the field to green to start Stage 2, but his lead didn’t last long as Reddick took the lead on Lap 36 in a wild restart that shuffled Tifft back to sixth-place after making contact with Christopher Bell in Turn 4.

The top four broke away as Tifft led the second pack for the majority of the stage.

Hemric charged to the front and passed Reddick for the lead on Lap 38 and led a four-car breakaway with Hemric ahead of Austin Dillon, Reddick and Bell.

Hemric and teammate Dillon stayed in line and were able to build a 1.5-second lead over third-place Bell by Lap 52.

Most of the lead pack decided to pit under green on Lap 57 ahead of the end of Stage 2 in an effort to gain track position for the final stage. However, Hemric stayed out to claim the stage win and score a playoff point.

Bell finished ahead of Allgaier in a photo finish for second-place with Custer and Ryan Preece completing the top five.

Christopher Bell to try for another NASCAR win on dirt