Jones hopes to impress in his Nationwide coming out party 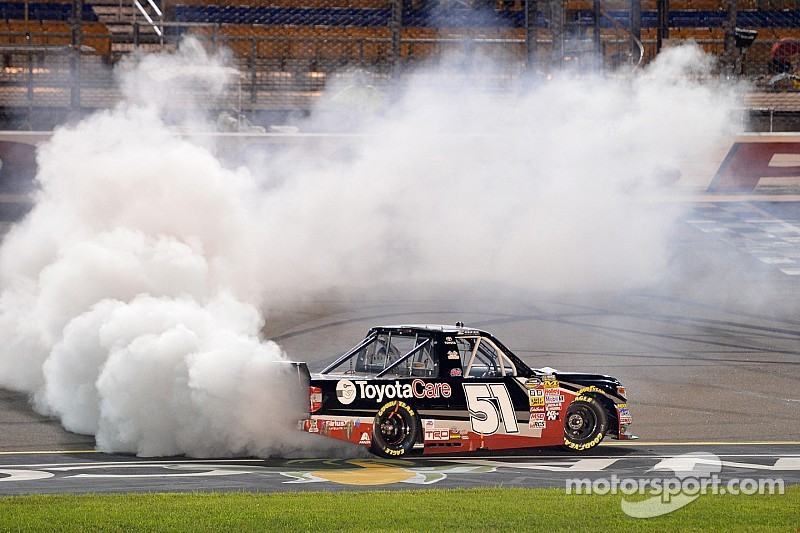 Fresh off of his truck win at Iowa Speedway, Erik Jones is looking to make his Nationwide Series debut this weekend at Chicagoland Speedway.

Jones, 18, will drive the No. 20 NarcolepsyLink.com Toyota for Joe Gibbs Racing in the EnjoyIllinois.com 300 on Saturday.

Chicagoland marks the first of a three-race stint for Jones which also includes Bristol Motor Speedway and Phoenix International Raceway.

“Really looking forward to what that's going to bring and seeing how it all works out.”

Jones’ second truck win came in just his ninth career start. His first victory was earned last November at Phoenix when at 17 he became the youngest winner in the history of the truck series. Jones’ PIR victory ignited an 11-race winning streak for Toyota.

His second win was not drama free, however. The No 51 Kyle Busch Motorsports failed height requirements in post-race inspection. Still, Jones led a career-high 131 of 200 laps at Iowa.

Certainly, the experience - and the win - should boost the Byron, Mich.-native’s confidence entering Chicagoland Speedway.

“Well, it was great in a lot of ways,” Jones said. “First of all, we did have some trouble at the beginning of the year, but I was happy that we could finally really put it all together here and pick up a win there at Iowa.

“That was a pretty cool deal..It was definitely a great win in a lot of ways for everybody over here at KBM and for myself just to get some momentum going.  Hopefully we can carry it into this next weekend and keep going on the Nationwide side of things.”

Jones tested the NNS car with the JGR No. 20 crew at Memphis. The Toyota development driver says he “learned quite a bit “ from the exercise. It also allowed him to get acclimated with the team prior to this weekend's activities.

Although Jones is accustomed to racing on short tracks, he’s looking forward to the new task on the 1.5-mile venue. And with JGR's record of four wins, nine top five's and 20 top 10 finishes in 35 starts, Jones will have solid equipment at his disposal.

Jones becomes the seventh driver to compete in the car – joining a cast of competitors including Matt Kenseth, Darrell Wallace Jr., Kenny Habul, Sam Hornish Jr., Michael McDowell and Daniel Suarez. Once the teams unload on Friday, Jones will have his JGR teammates Elliott Sadler and Hornish to help him get up to speed.

“The main thing is for me, and we've talked about it, is, honestly, just making laps at this point,” Jones said. “It's a really big step for me getting into a Nationwide car, and especially at a place like Chicagoland.  At first I'm just going to be looking to make laps and get to the end of the race and hopefully running up in the top 10.

“I'm really looking forward to the start I get in the 20 car.  I know it's a great team, and there are some expectations there, but at the same time they're obviously a little different for me just making my first couple starts in the Nationwide Series, but at the same time I'm wanting to go out and show them that I can do it and run well in the Nationwide Series and hopefully show that we can go out and be competitive.”

Tryson out as Kwasniewski crew chief