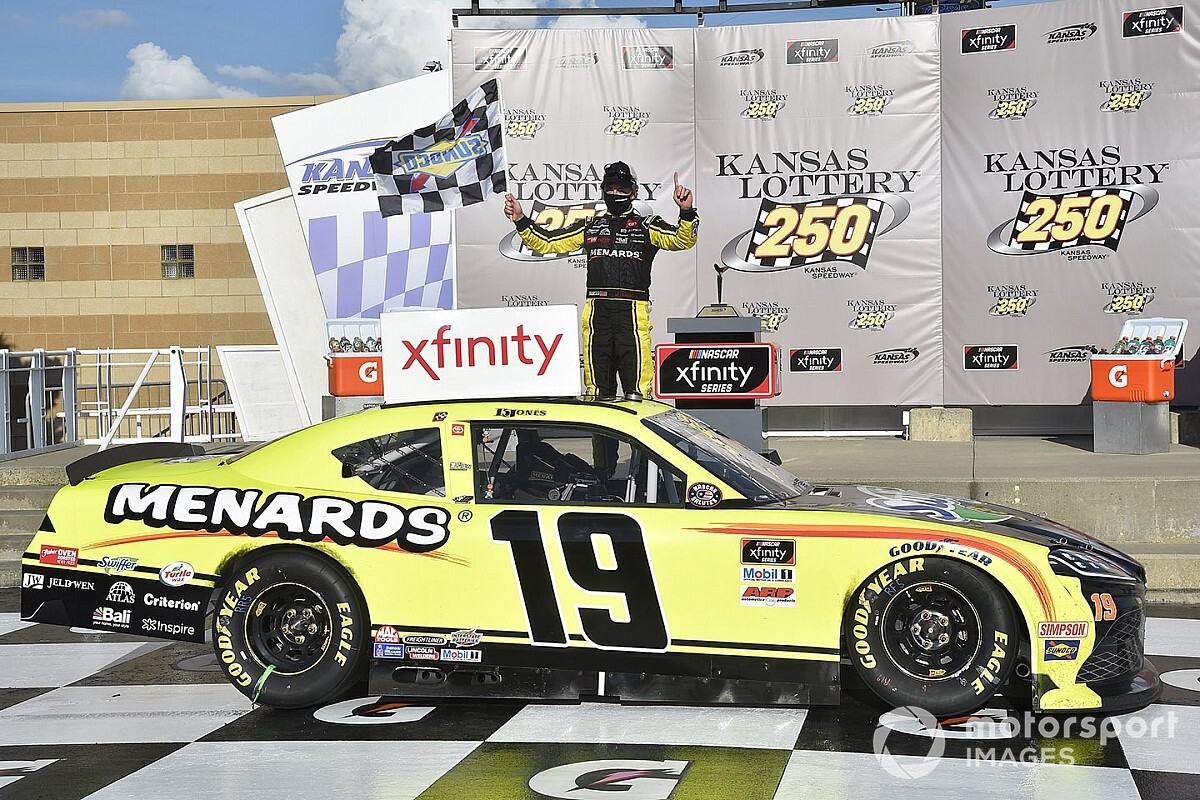 Brandon Jones charged from seventh to the lead in the second overtime to take a surprise win Saturday at Kansas Speedway.

Austin Cindric, who led a race-high 132 laps, took the lead on the second overtime restart and appeared headed to his fourth consecutive NASCAR Xfinity Series victory.

But on the final lap, Cindric tagged the wall and Jones powered around him to take the lead and held on for the win, his second this season and third of his career.

“We were never out of this thing – that’s what I love about these guys,” Jones said. “We keep our heads in the game and don’t get excited during these races. We continued to make changes (to the car) and got it pretty good.

“It’s been a long two days. I feel exhausted. Obviously, the heat’s been big here. I’m looking forward to celebrating with these guys and it’s good to get back to Victory Lane.”

Asked about the win coming off a difficult stretch of four finishes of 30th or worse in his previous five races, Jones said, “It just kind of shows we’re still running good. Every time we haven’t finished a race, we’ve been taken out or had a mechanical failure, so it just goes to show we still have the speed.”

Cindric held on for second, Harrison Burton was third, Ryan Sieg fourth and Ross Chastain rounded out the top-five.

“Sorry guys, I should have run the bottom, dammit,” Cindric said over his team radio after the finish. “I was too tight. OK, done with the excuses.”

With 55 of the scheduled 167 laps remaining in the race, Cindric maintained a more than 2-second lead over Burton as teams begin to enter the window to make their final green-flag stops in the race.

On Lap 127, Justin Haley – running ninth – became the first of the lead-lap cars to make their final stop for tires and fuel to make it to the end of the race.

Cindric and Burton both hit pit road on Lap 127 for their stop as more of the lead-lap cars hit pit road.

With 25 laps to go, two drivers had yet to pit and Cindric had worked his way back to third, with Burton a little more than a second behind him in fourth.

During his pit stop, Noah Gragson received a stop-and-go penalty for removing equipment.

Once the cycle of stops was completed on Lap 146, Cindric re-emerged as the leader followed by Burton, Chastain, Daniel Hemric and Justin Allgaier.

On Lap 157, while racing Burton hard for the lead, Cindric went up the track and tagged the wall while Burton moved into the race lead for the first time in the race.

With five laps remaining, Burton had expanded his lead over Cindric to more than a second. Chastain was third, more than 6 seconds behind the leader.

Joe Graf Jr. hit the wall in Turn 4 with four laps to go to bring out a late caution. Most of the lead-lap cars elected to pit but Sieg elected to remain on the track and inherited the lead. Cindric was the first car off pit road.

On the restart heading into the two-lap overtime, Sieg was followed by Cindric, Burton, Chastain and Allgaier.

Jesse Little spun out and stopped on the track shortly after the restart to send the race into a second overtime. The lineup returned to the previous scoring loop, leaving Sieg in the lead followed by Cindric, Chastain, Hemric and Burton.

Cindric withstood a hard-charging challenge from Burton to take the Stage 2 win, his seventh stage victory of the 2020 season.

Allgaier was third, Chastain fourth and Haley rounded out the top-five.

Following the break between Stages 1 and 2, all lead-lap cars elected to pit with Cindric the first off pit road. On the restart on Lap 47, Cindric was followed by Chastain and Burton.

On Lap 49, Allgaier had moved up to second as Burton remained in third. Burton got around Allgaier to take over second on Lap 53.

With 25 laps remaining in the second stage, Cindric had built a 1.7-second lead over Burton as Allgaier ran third.

After 65 laps, Burton had cut Cindric’s lead to under a second while Allgaier ran third and Haley moved into fourth.

With five laps to go in the stage, Burton had closed to the rear bumper of Cindric challenging for the lead.

Cindric easily took the Stage 1 win as Chastain held off a furious challenge from Burton for second. It’s the sixth stage win for Cindric this season.

Burton ended up third, Jones was fourth and Allgaier rounded out the top-five.

Michael Annett started on the pole thanks to a random draw but Jones quickly grabbed the lead on Lap 1 off Turn 4.

On Lap 11, Cindric cleared Jones on the bottom lane to take the lead for the first time in the race.

NASCAR displayed a caution on Lap 21 to allow teams to check tire wear. Most of the lead-lap cars remained on the track, including Cindric and he led the way on the restart on Lap 26.

With 10 laps remaining in the first stage, Cindric had a little over a half-second lead over Chastain with Jones running third.

Before the race went green, Haley was experiencing radio issues and Myatt Snider had to take his No. 93 Chevrolet to the garage with a starter problem but eventually returned to the track.