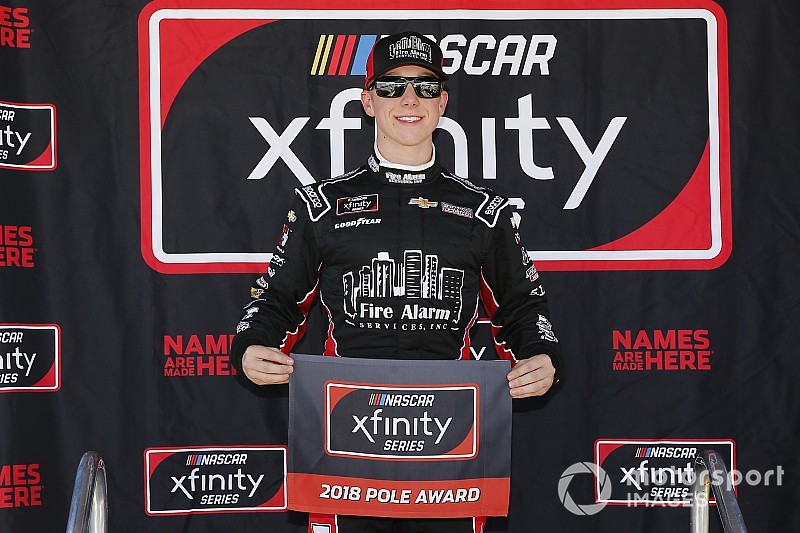 After earning his first series win, John Hunter Nemechek will get the opportunity to compete for a NASCAR Xfinity Series championship next season.

GMS Racing announced on Thursday that Nemechek, the 21-year-old son of NASCAR veteran Joe Nemechek, will compete fulltime for the organization in 2019, driving its No. 23 Chevrolets in the Xfinity Series.

John Hunter’s first race with GMS will be the 2019 season opener at Daytona International Speedway.

“I am very grateful for the opportunity that Mr. (Maury) Gallagher and the whole GMS organization has presented to me to be able to go run fulltime in 2019,” said Nemechek.

“The results that GMS Racing showed last year in their Xfinity program were impressive. Their goal is to create a championship-caliber team, like their Truck program, and I believe that we can achieve that goal this 2019 season.”

Nemechek made 18 Xfinity Series starts this past season with Chip Ganassi Racing and earned his first victory this fall at Kansas Speedway. He ended the year with six top-five and 11 top-10 finishes and won on pole.

Nemechek also ran 18 Truck Series races with his family-owned Nemco Motorsports team. He picked up a win at Martinsville, Va., and finished with six top-five and 10 top-10 finishes.

Spencer Gallagher began the 2018 season competing in the No. 23 and earned is first series win at Talladega, Ala., but was suspended for a violation of NASCAR’s substance abuse policy.

After returning following completion of the Road to Recovery program, Gallagher began transition to a managerial role with the team and GMS utilized several drivers in the No. 23 for the remainder of the year.

Veteran crew chief Chad Norris will lead to lead the No. 23 team.

“John Hunter is a wheelman,” Mike Beam, president of GMS Racing, said. “We are excited to have him on board for the 2019 season. With how much progress we showed last year in our NASCAR Xfinity Series program, I know that John Hunter will take us to the next level.”

NASCAR Mailbag: Send in your questions