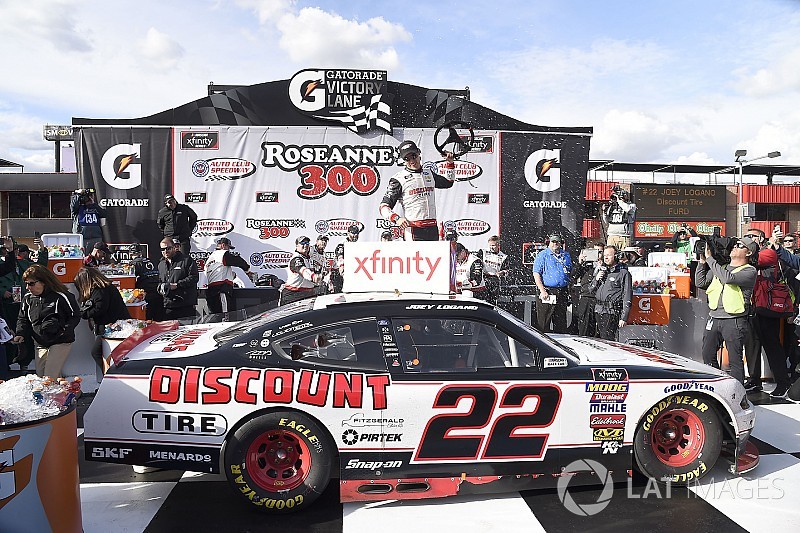 Not even a difference in pit strategy could slow down Joey Logano’s march to victory Saturday.

Although Logano dominated much of Saturday’s Roseanne 300 at Auto Club Speedway, he was mired in 16th on a restart with 26 of 200 laps remaining, having gotten off-sequence with the rest of the field.

Within four laps, Logano had powered to the lead and ended up holding off Justin Allgaier to earn his first NASCAR Xfinity Series win of the season and 29th of his career.

Logano won both stages and led a race-high 139 laps. He also continued a streak at the track dating to 2002 of Xfinity series regulars being unable to crack Victory Lane.

“That just showed how fast our car was,” Logano said of his ability to quickly return to the lead. “What an amazing car. I was the lucky one who got to drive it. I had a lot of fun out there.”

Asked if he was involved in the pit calls, Logano said: “I don’t really weigh into those very much. My job is to drive the car. I know where my weaknesses are and it’s usually calling a race.

“Those guys are way smarter than me. I let them do their job and I do my job and it all kind of works out. It was good to get (a win) in the books.”

A caution for Dylan Lupton’s blown engine with less than 40 laps remaining set up some varied pit strategy. Logano and three others remained on the track while the rest of the lead-lap cars pit for new tires.

On the subsequent caution on Lap 121 for debris in Turn 2, Logano made his stop for new tires but most of the rest of the field stayed out, allowing Allgaier to move into the lead and leaving Logano stuck back in 16th.

With new tires on the restart with 26 to go, Logano moved to ninth after one lap and third after the second. He easily cleared Sadler for the top spot one lap later.

A caution involving Austin Cindric brought set up another restart with eight laps remaining. Ryan Sieg elected to take fuel only and grabbed the lead but Logano reclaimed it before they had cleared the first turn.

Logano led every green-flag lap but ended up claiming the Stage 2 victory under caution.

Logano was on his way to a dominating victory over Tyler Reddick until John Hunter Nemechek blew his right-front tire with one lap remaining in the 35-lap segment. The race did not return to green before the end of the stage.

“I’m really happy with our long-run speed. I just need to figure out how to get some clean air, particularly on the restarts,” Reddick said during the race. “I’m having a blast out here right now.”

Logano remained in the lead to begin the second stage after he was the first car off pit road. On the restart, he was followed by Allgaier, Custer, Reddick and Sadler.

With 20 laps remaining in the stage, Logano had moved out to a sizeable lead followed by Allgaier, Cole Custer, Reddick and Bell.

On Lap 56, Austin Cindric made contact with the wall and appeared to suffer right-side damage. There was no caution but he headed to pit road to have his team examine the car.

With 10 laps remaining in the stage, Logano maintained his grip on the lead followed by Reddick, Bell, Sadler and Allgaier.

Logano claimed the Stage 1 victory under caution following a wreck with three of the 35 laps remaining.

Bell, the pole-sitter, held the lead early but Logano powered around him for the top spot on Lap 5.

With 20 laps remaining in the first stage, Logano led the way followed by Custer and Allgaier.

With 10 laps left in the stage, Logano continued out front followed by Custer, Allgaier, Reddick and Sadler.

On Lap 30, Hemric appeared to hit the wall but there was no caution and he continued on without an issue.

On Lap 32, Matt Mills got into the wall to bring out the first caution of the race. The race was not able to return to green before the conclusion of the stage.

Lupton was forced to start the race from the rear of the field after he wrecked during qualifying on Saturday morning.

Five things to watch in Saturday's Xfinity race at Fontana

Ross Chastain: “It makes them mad when we race against them"