How a former Olympian is training Ford's rising NASCAR stars 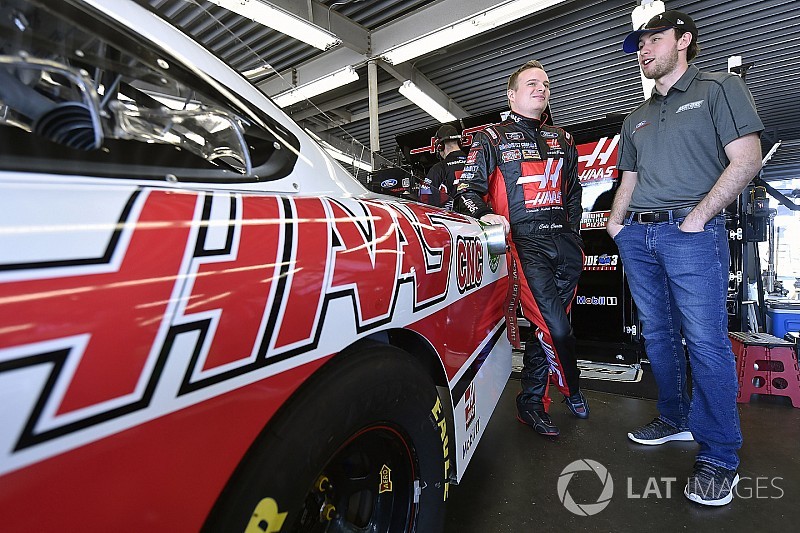 Neither Cole Custer, Chase Briscoe nor Ty Majeski were born when Dan Jansen won the gold medal in the Men’s 1000-meter speed skating competition in the 1994 Winter Olympics at Hamar, Norway.

But the 20-something drivers in the Ford Performance development program have benefited from Jansen’s expertise as an elite athlete.

Jansen has worked as a skating coach as well as a commentator for NBC after his glory days. But now the 52-year-old West Allis, Wis., native lives in North Carolina and can be found training Ford’s future stars.

“Obviously, Dan comes from a unique background with the Olympics—and a unique experience with the Olympics with what he had to overcome while he was there and coming back the following Olympics,” says Pat DiMarco, NASCAR Program Supervisor, Ford Performance. “So he brings a different perspective to it. He’s a world-class athlete. So it’s great to have somebody like that to help the young kids, not only in body but in mind as well, to prepare and to overcome adversity.”

Working with Briscoe at BKR

Jansen started with Brad Keselowski’s truck team in 2016. Briscoe, 23, started training with Jansen last year as a Camping World Truck Series rookie but had never worked out prior to joining Ford.

“We do different stuff every day,” said Briscoe. “Really, it’s different every day.”

“A lot of agility and hand-eye coordination and reaction-time stuff,” Majeski added.

“Ladder drills, cardio,” Briscoe offered. “We had to run a 5k the other day in Davidson (N.C.). In 30-degree weather at the (college) track. It’s a lot of different stuff. Dan did all my stuff last year. This year it’s been Dan and Nic Jonsson—a road course racer. He’s always worked with Cole in the past. They integrated us into the program.”

Custer among those who benefit from Jansen's expertise

Custer, 20, who drives the No. 00 Ford, has also benefitted from Jansen’s expertise. Briscoe and Majeski, both 23, join Custer at Stewart-Haas Racing for regular workout sessions.

“It’s been cool to try and improve ourselves a little bit and trying to get our reaction times better,” Custer said. “Being good at the end of the race is about having enough stamina to be good on that last restart.

“It’s definitely been cool to get to know Chase and Ty a little bit and just trying to work out.”

In racing, bonding usually occurs only within the teams. But Ford has worked to bring the drivers closer together as they rise through NASCAR ranks. Last month, Custer and the three Program 60 drivers—Briscoe, Majeski and Austin Cindric—participated in the IMSA Continental Tire SportsCar Challenge in 2018. The manufacturer felt the time on a road course would be well spent for Custer, Majeski and Briscoe.

As for Cindric, who starts 10th in Saturday's Power Shares QQQ 300, road course racing and training is nothing new.

“I’m on my own program,” says Cindric, who will pilot the No. 60 Roush Fenway Racing Ford in Saturday’s Xfinity Series race. “I get my butt kicked by somebody else. I’ve been working out for the last five years. Running a lot of sports car stuff, because I’m so tall, I have to be as light as possible. I’m already heavy because I have a lot of body. It’s low body fat all the time.”

Competiting against one another

All three of the Program 60 drivers, along with Custer, will race at Talladega Superspeedway on April 28. Briscoe will join Custer in a Stewart-Haas Racing Ford. Cindric will drive for Team Penske and Majeski will make his restrictor plate debut in a RFR Ford.

“That will be cool, because it will be my first restrictor-plate race,” Majeski said.

“Have fun with that,” Briscoe said.

“We know we will have two people that will help us,” Cindric said.

“Until five to go,” added Majeski.

“We’re all three in good superspeedway cars to that will be big,” Briscoe said.

“And we’ll all have Roush-Yates power,” Cindric said.

“But we’ll all be with different teams,” Majeski said. “That’s what will be unique about it.”

“It will be neat,” Briscoe said.

“But we’ll have to make it past the second lap,” said Cindric, referring to the wreck triggered by Briscoe and Noah Gragson on Lap 1 of the season-opening truck race that sidelined him in the process.

“We’ve gotten really good at helping each other out, let me tell you,” replied Briscoe.

“We didn’t get to help each other at all,” Cindric said.

“Yeah, I wrecked him, Lap 1 of Daytona,” Briscoe said.