Reigning series champion Austin Cindric got a good jump to the start of the two-lap overtime but Hemric was able to power back and alongside Cindric on the final lap.

Entering the final turn, Hemric edged up into Cindric’s driver-side door, the two made contact and crossed the finish line trading sheet metal.

Hemric edged Cindric by 0.030 seconds in the photo finish, giving him in his first win in 208 career NASCAR starts and the series championship.

“I lost my breath. It’s just unbelievable,” Hemric said after completing a wild burnout on the frontstretch and a backflip off his car. “These guys here have been asking me all year, ‘How bad do you want it?’

“I gave one away here in the spring. I felt we gave one up last week to get here. Tonight, we were not going to be denied. I’ve been waiting a long damn time to do that.

“I knew we had to be the first one to the line. I thought I let (Cindric) get too much of a run off (Turn) 4, drove into (Turn) 1 and was just close enough to not completely use him up but, I mean we work our asses off for an opportunity like this. This is what it’s all about – winning at the second-highest level in all of motorsports.

Hemric, 30, said he had given up a lot to pursue his NASCAR career.

“People have doubted me. I’d do it all over again for a night like this,” he said.

The win was also Hemric’s final race with Joe Gibbs Racing. He will compete fulltime in the Xfinity Series next season with Kaulig Racing.

“I felt like we had a dominant race car and that we did everything right. We came up a little short. Sometimes, it turns out that way.”

Harrison Burton finished third in the race, Riley Herbst was fourth and Justin Haley rounded out the top-five.

Cindric’s No. 22 Penske team did win the owner’s championship with his runner-up finish in the race. 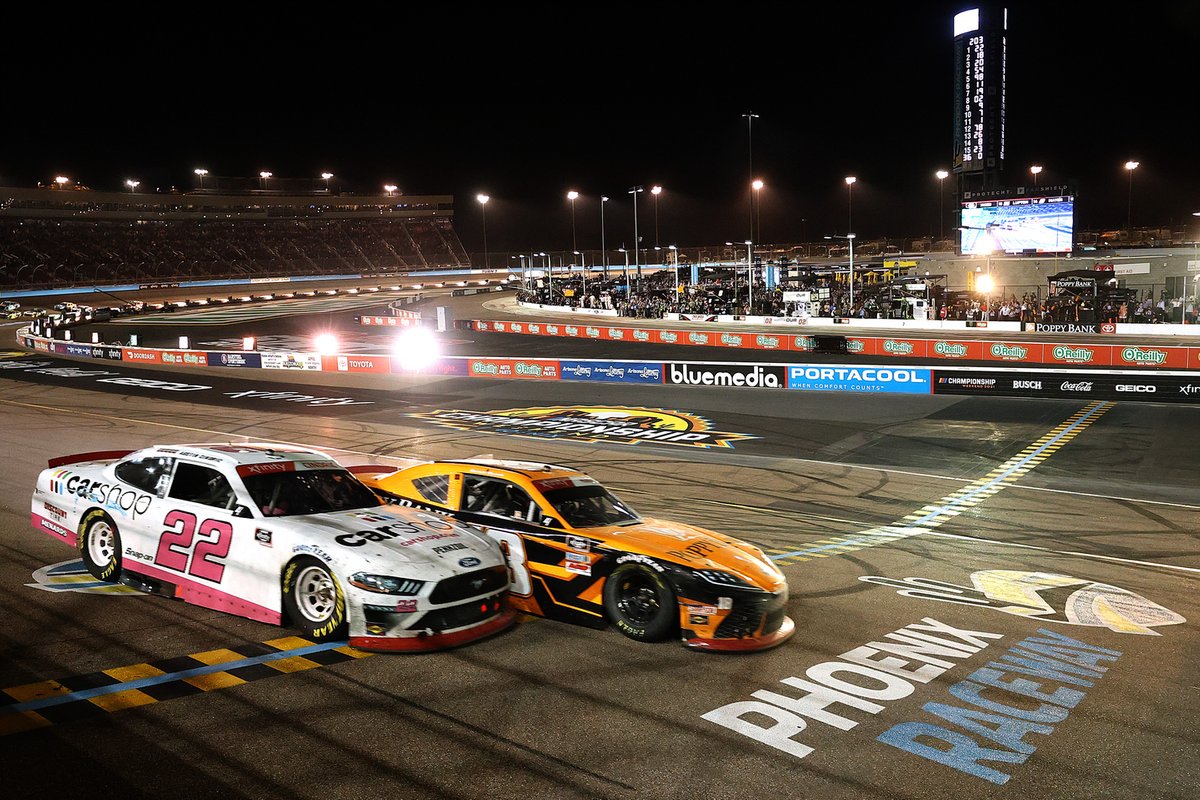 Following the break between Stages 2 and 3, all lead-lap cars pit with Hemric was again the first off pit road. Noah Gragson was penalized for an uncontrolled tire during his stop and had to restart from the rear of the field.

The race returned to green on Lap 98 with Hemric out front followed by Cindric, John Hunter Nemechek and Justin Allgaier.

Joe Graf Jr. wrecked in Turn 1 on Lap 99 after contact with Sage Karam to bring out the fourth caution of the race.

The race resumed on Lap 106 with Hemric out front followed by Cindric and Nemechek.

Gragson pit only for fuel during a caution on Lap 109, hoping to turn it into an advantage later in the race. Hemric remained the leader on the restart on Lap 114.

Cindric got around Hemric on Lap 115 to move back into the lead.

On Lap 125, NASCAR displayed a caution for possible fluid on the track from the car of Stefan Parsons. All the lead-lap cars elected to pit with Cindric the first off pit road.

When the race went green on Lap 135, Cindric was followed by Nemechek, Allgaier and A.J. Allmendinger.

Allgaier grabbed the lead on the restart but was penalized for a restart violation. He drove his No. 7 Chevrolet under the yellow line before the start/finish line.

Jade Buford spun off Turn 2 on right after the restart to put the race back under caution. Cindric led the way on the restart on Lap 141.

With 50 laps remaining, Cindric had built up about a 1-second lead over Hemric as Nemechek ran third.

With 30 laps to go, Cindric’s lead over Nemechek held steady at 1.2 seconds as Hemric ran third, 2.1-seconds behind the leader.

Allmendinger had been complaining of a bad vibration and finally on Lap 181, he spun out to bring out a caution.

All the lead-lap cars pit with Cindric the first off pit road. When the race resumed on Lap 188, he was followed by Hemric, Gragson, Harrison Burton and Nemechek.

Jeb Burton spun off Turn 4 to bring out the ninth caution of the race and bunched the field one more time. The race returned to green with eight laps remaining and Cindric still out front.

Buford and Josh Williams wrecked on the backstretch on Lap 194 to place the race back under caution and send it into a two-lap overtime. Cindric led on the restart followed by Hemric, Nemechek, Harrison Burton and Haley.

Hemric held off fellow title contender Cindric to claim the Stage 2 win, his 10th of the 2021 season.

Following the break between Stages 1 and 2, the lead-lap cars all pit with Hemric the first off pit road. Sam Mayer and Josh Williams were penalized for speeding on pit road and had to restart the race from the rear of the field.

On the restart on Lap 53, Hemric was followed by Cindric and Gragson.

Jeffrey Earnhardt and Kyle Weatherman wrecked on the backstretch on Lap 60 to bring out a caution.

When the race resumed on Lap 66, Hemric was followed by Cindric, Allgaier and Nemechek.

Nemechek powered from sixth to first and reclaimed the lead on Lap 67 as Hemric dropped to second.

With 15 laps remaining in the second stage, Nemechek had opened up a nearly 1-second lead over Hemric while Cindric was closing from third.

On Lap 86, Hemric was able to clear Nemechek and move back into the lead.

Nemechek was third, Allgaier fourth and Gragson rounded out the top-five.

Cindric started on the pole but Nemechek grabbed the lead in Turn 3 on the first lap.

After battling for several laps, Cindric finally worked his way back around Nemechek to take the lead on Lap 21.

With 20 laps remaining in the first stage, Cindric maintained a small advantage over Nemechek with Hemric in third, 1.5-seconds behind the leader.

With five laps to go, Cindric had opened up a 1.6-second lead over Nemechek and Hemric remained in third.