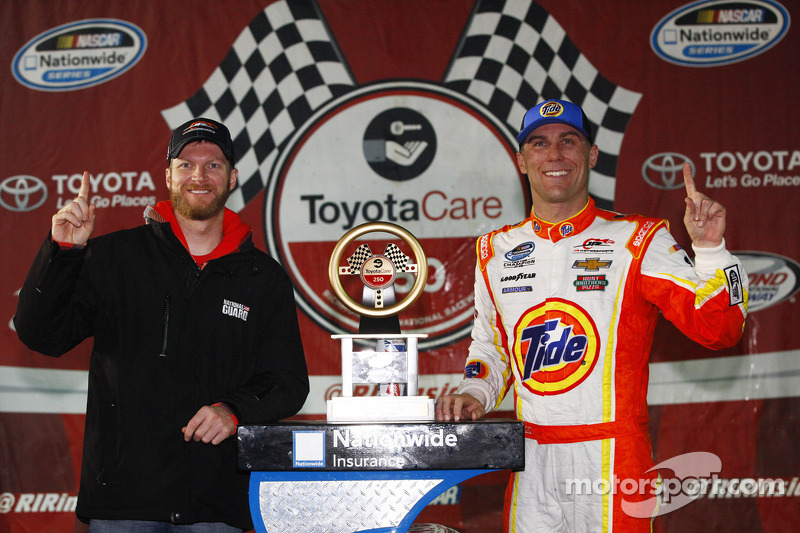 Kevin Harvick put on a clinic at Richmond on his way to easily securing his 41st career victory in the series, and JR Motorsport's fourth win of 2014.

After a rain delay of nearly three-and-a-half hours, Kevin Harvick dominated the ToyotaCare 250 NASCAR Nationwide Series race at Richmond (Va.) International Raceway on Friday night. From behind the wheel of the No. 5 JR Motorsports Chevrolet, he led 202 laps of the 250 that made up the race on his way to his seventh-career win at the track. During his time up front, he also became the series all-time laps leader at Richmond.

For most of Harvick's laps led, his JR Motorsports teammate, Chase Elliott in the No. 9 Chevrolet ran second. Elliott finished second to Harvick to give JR Motorsports its first-ever one-two finish. It was also the third-straight win for JRM, as Elliott drove to victory lane in the two most recent races at Darlington Raceway and Texas Motor Speedway.

"He pushes us to be better," Harvick said of his teammate. "He's as good as they get."

Harvick took the lead from pole sitter Brian Scott in the No. 2 Richard Childress Racing Chevrolet just before the lap 50 mark and led the rest of the way. Prior to losing the lead, Scott led 45 laps.

By the time the race approached the 100-lap mark, Harvick had a lead of nearly five seconds. As a result of the cushion, he was able to maintain his lead through a lengthy cycle of green-flag pit stops, despite staying out on older tires longer in a race that saw significant tire wear. Elliott also pitted late and wound up sixth after the cycle completed.

"We got a little off on that one run, there," Harvick said."

It only took Elliott a few laps, though, to get back up to third. He then got off pit road second to Harvick during a debris caution that came out on lap 151 and ran second to his teammate for the remainder of the race.

"We were just a little tight coming out of the corner," Elliott said. "I think he (Harvick) just out-drove me."

The No. 54 Joe Gibbs Racing Toyota of Kyle Busch finished third, and the No. 42 Turner Scott Motorsports Chevrolet of Kyle Larson got by the No. 22 Team Penske Ford of Ryan Blaney with 16 laps to go for fourth. By the end, Blaney had slid back to ninth. After leading early, Scott wound up fifth.

The No. 11 Joe Gibbs Racing Toyota of Elliott Sadler and the No. 7 JR Motorsports Chevrolet of Regan Smith both spun on a restart with 54 laps remaining to immediately bring out another caution. But both drivers recovered to finish in the top-10, with Sadler finishing sixth and Smith eighth.

The No. 60 Roush Fenway Racing Ford of Chris Buescher finished seventh, and the No. 99 RAB Racin Toyota of James Buescher rounded out the top-10.