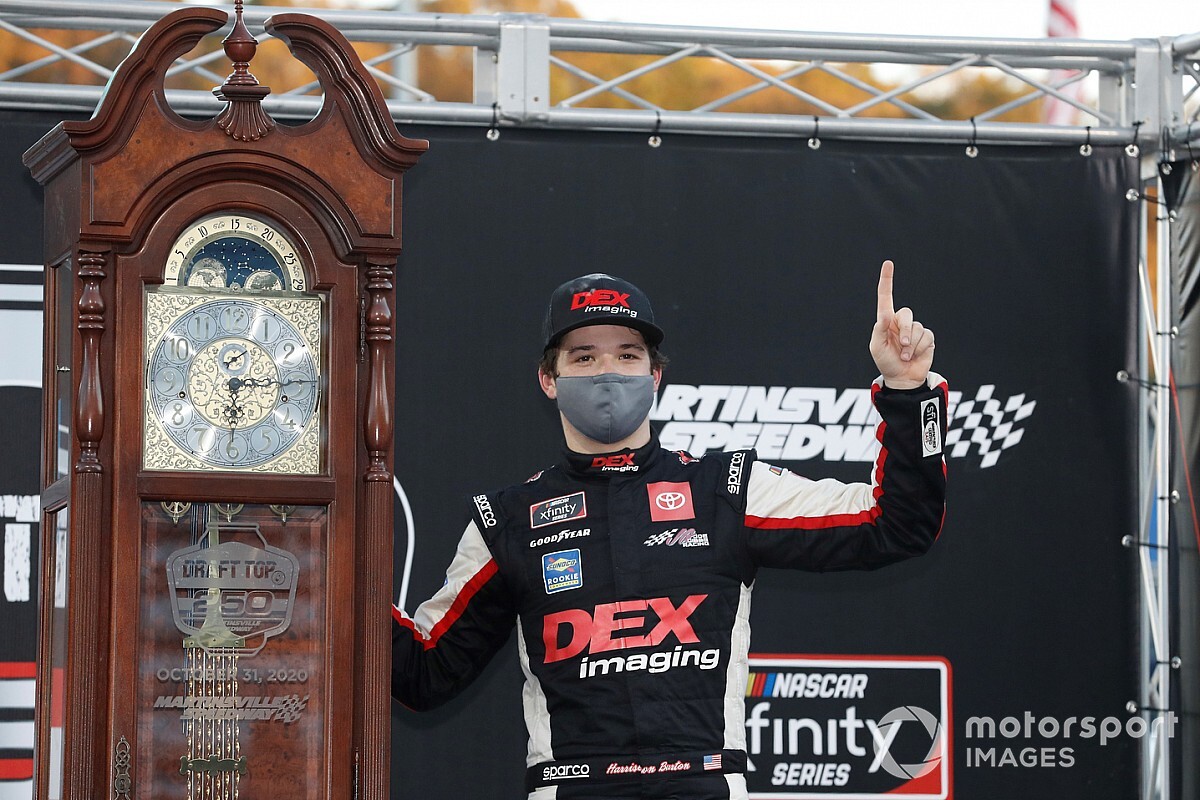 Burton, who was eliminated from title contention early in the playoffs, held off a spirited challenge from Justin Allgaier to win Saturday’s race at Martinsville (Va.) Speedway, the first series race at the short track since 2006.

Burton led five times for a race-high 81 laps and spent the final 30 laps being chased by playoff drivers trying to win their way into next weekend’s title race at Phoenix.

The win is Burton’s fourth in his rookie season in the series. Burton, 20, also becomes the youngest series winner at the track, beating a record held by his father, Jeff Burton, who was calling the race for NBC Sports.

“It was a really fun race. Martinsville is one of those places that’s really cool to win at. For me in particular, because my family is from here,” Burton said. “There’s a guy in a hot dog for Halloween. The fans here are awesome.

“It’s amazing to win here at what is one of my home tracks I would say and do what my dad did. I think it was his first Xfinity win was here.

“It’s pretty hard to describe how exciting this is. My race team worked their tails off on this car expecting us to have to fight to get into Phoenix to win a championship and we got knocked out, but we’ve proven people wrong.

“We won two in a row in this round and we’re going to go try to make it three at Phoenix.”

The four drivers who will compete for the series championship next weekend at Chase Briscoe (who was already locked in with a win), Austin Cindric, Allgaier and Justin Haley, who edged Ross Chastain by five points for the final spot.

Noah Gragson finished third in the race, Jeb Burton fourth and Chastain rounded out the top-five.

Following the break between Stages 2 and 3, several lead-lap cars pit but A.J. Allmendinger remained on the track and inherited the lead.

On the restart on Lap 128, Allmendinger was followed by Harrison Burton, Herbst and Jeb Burton.

J.J. Yeley spun in Turn 2 on Lap 132 to bring out the eighth caution of the race. The race returned to green on Lap 139 with Allmendinger out front.

With 80 laps remaining in the race, Allmendinger remained out front but was being hounded for the lead by Harrison Burton as Jeb Burton ran third.

Bayley Currey wrecked hard off Turn 2 on Lap 182 which forced NASCAR to throw another caution. All the lead-lap cars pit with Harrison Burton the first off pit road.

On the restart on Lap 190, Harrison Burton led the way followed by Allmendinger and Jeb Burton.

Burton got back around Allmendinger with 52 laps to go and shortly thereafter Allmendinger was forced to pit under green with a left-rear flat tire.

Allgaier moved into the second spot behind Burton with 40 laps remaining and seemed to be making progress on closing the gap with the leader.

Myatt Snider spun and wrecked in Turn 3 on Lap 214, which was the 10th caution of the race. Only a handful of cars pit while Harrison Burton remained on the track and in the lead.

The race returned to green with 30 laps to go.

With 10 laps remaining, Harrison Burton maintained a nearly 1-second lead over Allgaier with Gragson close behind in third.

Chastain held off a tough challenge from Gragson over the final six laps to take the Stage 1 victory, his first stage win of the season.

Haley was third, Allgaier fourth and Cindric rounded out the top-five.

Following the break between Stages 1 and 2, most lead-lap cars elected to pit with Harrison Burton the first off pit road.

On the restart on Lap 69, Yeley led the way as he was one of a handful of cars that stayed out. He was followed by Ryan Sieg and Harrison Burton.

Burton got around Yeley to take the lead on Lap 70 only to see a caution come out for a 3-car wreck in Turn 3 on Lap 73.

NASCAR was forced to red-flag the race for nearly seven-minutes to clean the track of debris from the incident.

The race returned to green on Lap 81 with Harrison Burton out front followed by Gragson and Cindric.

Gragson quickly moved into the lead after the restart only to see Burton grab it back on Lap 83.

Chastain moved into the second spot on Lap 88 as Gragson dropped to third.

After running side-by-side for more than a lap, Chastain finally got around Burton and took the lead on Lap 93 for the first time in the race.

Matt Mills had his engine blow on Lap 105 which brought out another caution and required an extensive cleanup of fluid on the track.

A handful of lead-lap cars pit but Chastain remained on the track and in the lead on the restart on Lap 115 followed by Gragson and Haley.

Gragson came out on top in a three-way battle for the lead, holding off Harrison Burton to win Stage 1, his ninth stage win of the 2020 season.

Cindric was third, Chastain fourth and Haley rounded out the top-five.

Cindric started on the pole and led the way until a caution was displayed on Lap 5 when Gray Gaulding’s car came to a stop in Turns 1 and 2.

Cindric led the way on the restart on Lap 9 followed by Gragson and Haley.

On Lap 26, NASCAR displayed a competition caution to allow teams to check tire wear. Most drivers stayed on the track and Cindric continued to lead the way when the race returned to green on Lap 32.

Gaulding spun in Turns 1 and 2 on Lap 36 and ended up stopped on the track. Most lead-lap cars again stayed out and Cindric remained out front on the restart on Lap 43.

Gragson raced side-by-side with Cindric on the restart and cleared for the lead on Lap 44 as Harrison Burton moved into second.

With 10 laps remaining in the first stage, Harrison Burton ran right on the rear bumper of Gragson hoping for an opportunity to make a pass.

Live Fast Motorsports enters NASCAR as a new team for 2021

Cindric takes the title: ‘Why couldn’t we?’