From the Pettys to the Earnhardts and others, generations of a single family in NASCAR competition is nothing new. Third generation racer Ryan Blaney is the newest member of the Blaney family trying his hand at national level NASCAR racing.

The Blaney tradition in racing began in sprint cars with grandfather Lou Blaney. Ryan Blaney's father, Dave Blaney, and uncle, Dale Blaney, were standouts in World of Outlaws racing. The Blaney name was synonymous with sprint car racing, but Dave Blaney decided to take the family name to NASCAR, racing at the Nationwide (then-Busch) Series level in the 1990s and making the full-time move to Sprint (then-Winston) Cup competition in 2000.

He has learned very quickly in every series he has driven.

Ryan Blaney is following in his father's footsteps by making his way into top-level stock car racing. After successful stints in various local and regional levels of stock car racing, the young Blaney added a partial Nationwide Series schedule to his 2012 racing itinerary.

"I'm proud that Ryan is making the next step in his racing career," Dave Blaney said.

As of now, Ryan Blaney is slated for six races in a No. 36 Tommy Baldwin Racing Chevrolet at the Nationwide level. TBR just so happens to be the organization his father drives for in the Sprint Cup Series. The father and son duo also share a common car number in the 36.

"I think it is a great opportunity for him to run with TBR and still run some races in the (NASCAR) K&N Series (East)," Dave Blaney said. "He has learned very quickly in every series he has driven, so I am anticipating what competing in the Nationwide Series brings." 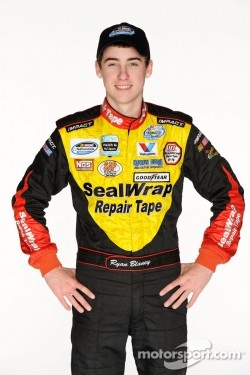 Two of the younger Blaney's six starts are already in the history books, and so far, so good, at least as far as his debut race went.

Blaney made his Nationwide level debut in the Virginia 529 College Savings 250 at Richmond (Va.) International Raceway on April 27 and scored a top-10 finish right out of the gate, posting a finish of seventh.

Of course, the 18-year-old driver is used to finding success pretty quickly. He claimed the pole for his first ARCA Racing Series event with a new track record at Winchester (Ind.) Speedway in June 2011. That pole wasn't a fluke, either. Even though it was his first race in the series, he led more than three-quarters of it, keeping his car up front for 154 of the race's 200 laps. Blaney did finish just outside of the top-five in that race, finishing sixth after suffering a tire issue.

Despite early success in other racing series, Blaney surprised even himself in his first time out in the Nationwide Series.

"We thought coming out of here with all the race car still intact and a top-15 finish would be real nice," Blaney said after his race at Richmond. "So, it did exceed my expectations a little bit, especially how good we were. Forty laps into a run; I think we were faster than anybody."

Whether it is because of his racing pedigree, his past success in other racing series, or the way he raced his competitors right from the start, Blaney does have one thing many other rookies struggle long and hard to get -- respect from his more-experienced competitors.

Being my first race, they gave me a lot of respect out there.

"The biggest thing I appreciated was the respect they gave me," Blaney said. "Being my first race, they gave me a lot of respect out there, a lot of give and take, and that really makes you feel good as a driver, inside, especially in your first start."

As for that second race, it didn't go so well. Blaney wound up 43rd and last in the finishing order for the VFW Sport Clips Help a Hero 200 at Darlington (S.C.) Raceway on May 11 after an accident ended his day on lap one.

While statistics show that Blaney has two Nationwide Series races under his belt, he only has the experience of one, since he raced less than a lap at Darlington. But considering that one full race produced a top-10 finish, all signs indicate that Blaney has a bright future in NASCAR ahead of him.

Kyle Busch looks for another Nationwide win at Charlotte

Ryan Blaney's admiration for Tony Stewart goes back to his childhood