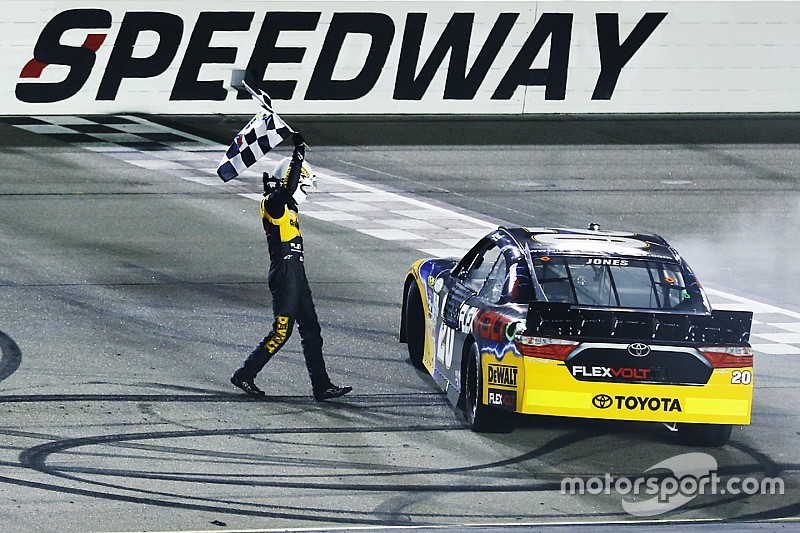 On paper it was another dominant victory for Erik Jones, but on the track it proved much more difficult at Iowa Speedway.

A lightning-fast pit stop got Ty Dillon the lead late in Saturday night’s U.S. Cellular 250 but Jones carefully ran him down and passed him for the lead with 15 of 250 laps remaining and held on for the victory.

The win is Jones’ third in the NASCAR Xfinity Series this season and fifth of his career.

“I wasn’t saving much,” Jones said when asked if he was saving tires down the stretch. “I was really working hard to get around Ty. It was tough. The aero game was pretty tough.

“We didn’t get clean air for a long time and burned a lot of tire off (on the last run). It was a great day and we had a great car – one that definitely deserved to win the race. The fastest car I feel like won tonight which is always a good feeling.”

Dillon, who hasn’t won in the series since his August 2014 victory at Indianapolis Motor Speedway, tried to remain upbeat on the runner-up finish.

“Man, I want to win so bad and that’s all I had. They’re just good right now,” Dillon said of Jones and his Joe Gibbs Racing teammates. “You have to give it all you have every lap and we came up about 10 laps short this time.

“I’m proud of my guys, they gave me a great opportunity for a win tonight. My heart’s been broken every race since Indy – I want to get to Victory Lane again. We got to get a little better.”

Trouble for the points leader

Suarez was knocked out of the race on Lap 179 with serious damage to the nose of his No. 19 Toyota. He ended up finishing 30th and dropping to third in the standings.

Suarez obtained the damage on the previous restart when he ran into the back of Josh Berry, who appeared to miss a shift on the restart and slowed dramatically.

“I don’t really know (what happened). I just know I tried to keep from wrecking in front of me,” Suarez said. Suarez had restarted seventh on the restart, losing several positions on pit road after a slow pit stop.

Suarez and Jones were not using their usual JGR pit crews at Iowa – both remained at Pocono Raceway for Sunday’s Sprint Cup race.

Dakoda Armstrong to drive for Gibbs at Iowa this weekend