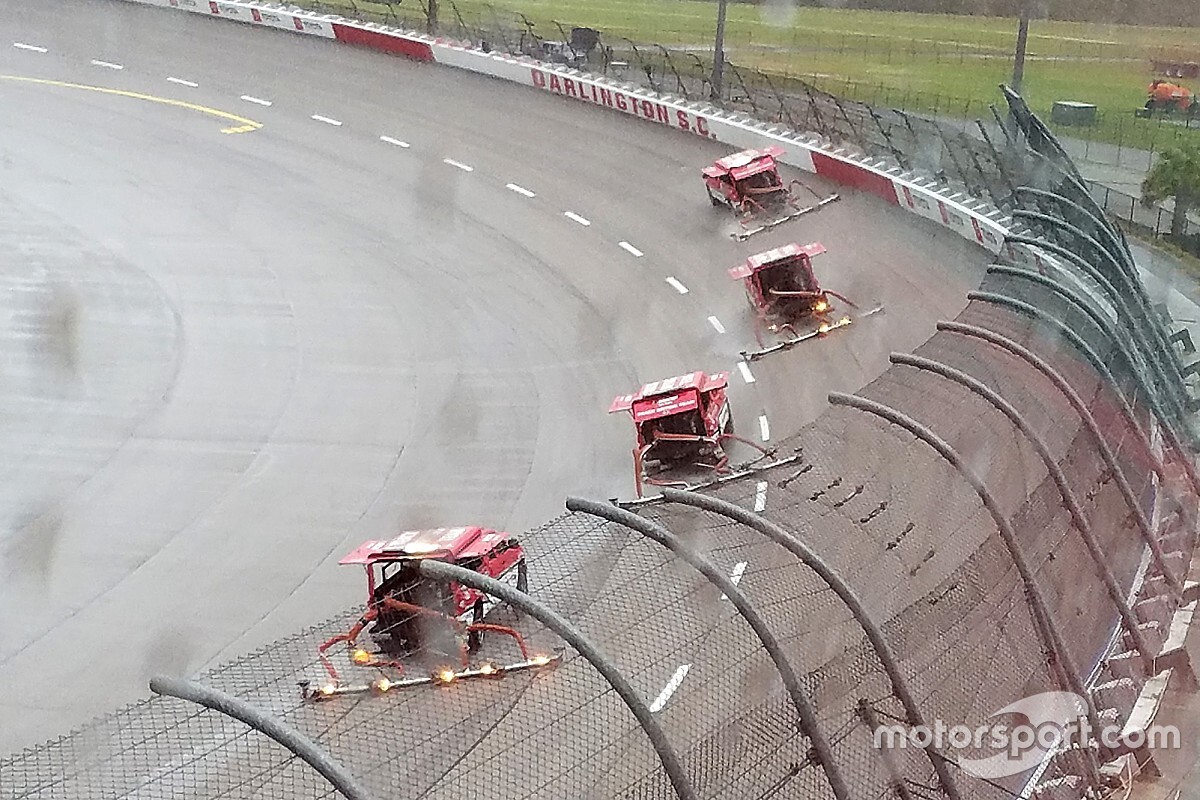 The restart of the 2020 NASCAR Xfinity Series will have to wait until at least Thursday.

Tuesday night’s Toyota 200 at Darlington (S.C.) Raceway was postponed shortly after 8 p.m. ET due to persistent heavy rains in the area.

The race was to be the first for the series since the COVID-19 pandemic brought a halt to all live sports in mid-March. NASCAR has rescheduled races through late June but without fans in attendance.

The race will now take place at noon ET Thursday and it will be broadcast on Fox Sport 1.

Noah Gragson, who was slated to start on the pole in Tuesday night’s race, was disappointed in the postponement but took it in stride.

“Two months of waiting and then what’s another couple days?” Gragson told a group of reporters at Darlington after the race was postponed. “It just seems like that’s how it’s kind of been in this world right now.

“But it’ll be great publicity with my car sitting out front of the field the next couple days. I wish NASCAR was just end the race right now and have the finishing order off the starting order.

“That would be a lot easier, you know?”

Gragson said it “felt great” to be back at the race track on Tuesday. While the race did not take place, NASCAR was able to complete the entire inspection process and there were no reported problems with any participants encountering problems in the medical screening process.

“It feels really good to just spend time around everyone,” he said. “Everyone is putting their hearts and souls and livelihoods into getting back to the race track and trying to stay as healthy as possible.

“Everybody has been working really, really hard following all the guidelines and trying to stay safe and healthy – that’s the important thing, not just for our team but for every team, for NASCAR, the pit crews, everybody who’s at the race track.

“We’re lucky to be able to get back to the race track. We’re a unique sport to be having a live sporting event during this time. It’s just great to be back and see everybody’s faces again. Our priority right now is to just keep everybody safe and the second is to get back on the race track.”

NASCAR has also moved up the start of Wednesday night's Toyota 500k Cup Series event to 6 p.m. ET. It was originally scheduled to start at 7:30 p.m. ET.

The forecast for Wednesday and Thursday does not look good, however.

According to The Weather Channel, there is a 90 percent chance of thunderstorms on Wednesday and 90 percent Thursday.

Sunday’s Cup race at Darlington, won by Kevin Harvick, was the first live NASCAR race held since March 8. The following week live sports shut down as the COVID-19 pandemic gripped the United States.