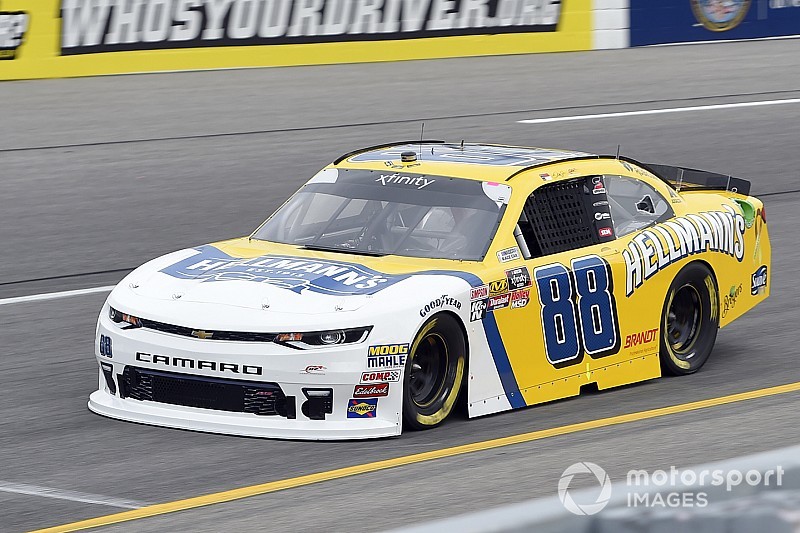 When Earnhardt announced his retirement from full-time NASCAR competition at the end of last season he said he’d honor commitments with his JR Motorsports organization in the Xfinity Series, and recently admitted “there’s a little itch to scratch” to get behind the wheel once again.

He returned to the track at Richmond on Friday morning, his first NASCAR action since last season’s Cup series finale at Homestead, and ran fifth fastest in the first session.

A rain shower arrived just 10 minutes into the second practice, but wasn’t ready to go in the car when it restarted, ending it in 16th position as he only completed six laps. After the session, Earnhardt ran up to the commentary booth for his NBC commentary role, explaining what happened ahead of Cup practice.

“I was a little late!” admitted Earnhardt. “So we had the first practice, everything was pretty good, car was good I was happy, couple of things to work on.

“It started raining [in the second session]. Started getting bored, didn’t know what to do with myself. So I walked down to the 88 hauler, to sit in my old seat in the driver’s lounge with my driver’s suit on. I’m like ‘that’ll feel good!’

“I was talking to Greg Ives [his former crew chief] – and I made Greg sick to his stomach when he initially saw me – and then practice started, so I ran [back] and got me about four laps – got enough laps, got a good read on it, but… just about missed the last practice entirely.

“So that’s what happens when you’re trying to do things, we’re patching all this together and it’s kinda held together by two bits of tape! This is what happens.”

When asked how he found the track on his driving return, he said: “The track is great, it’s got a lot of grip so it’s really tight, I was surprised.

“So I’m not sure how much to take that out of my car, I wasn’t real sure. It’s going to be a completely different track tonight, and especially tomorrow. When it rubbers up there’s going to be such a transition.

“Trying to figure all that out with the limited time we got in practice, it’s a bit of a headscratcher.”