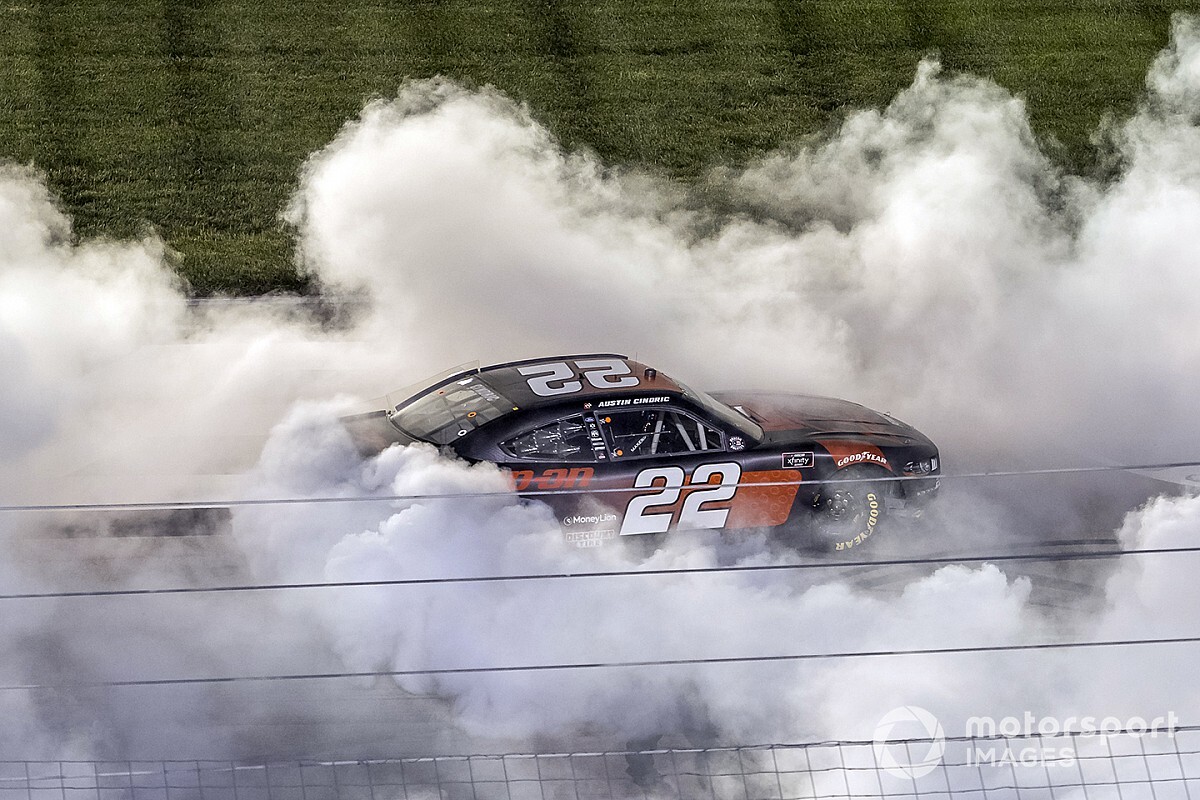 One night after grabbing a victory at Kentucky Speedway in overtime, Cindric dominated Friday night’s Alsco 300, leading 181 of 200 laps as he cruised to his fourth series victory.

“I’m just so excited. This is all a credit to my team. What we did tonight was really impressive because we ran one set-up last night and won the race and came with another set-up and won the race again,” Cindric said.

“That happens at the shop, that happens with the guys on the box. All credit to them I’m the lucky one that gets to drive this Ford Mustang.”

While Cindric was celebrating his sweep of the Kentucky doubleheader, Noah Gragson and Harrison Burton got into a physical altercation after the race. The two had made contact late in the race battling for position and both ended up hitting the wall.

“I just showed my displeasure with Noah,” Burton said. “It’s frustrating man. It’s two times this year that we have been wrecked by him.

“I had a lot of people coming up to me saying that was a long time coming, so I guess that was a popular move.”

Said Gragson: “We're all racing hard … I don’t really have a comment.”

Chase Briscoe ended up second, Justin Haley third, Ross Chastain fourth and Justin Allgaier rallied from a lap down to complete the top-five.

With 60 laps remaining in the race, Cindric held a commanding 8-second lead over Hemric while Herbst was third, close behind Hemric.

On Lap 145, Gragson was the first among the top cars to make his final green-flag pit stop to pick up enough fuel to make it to the finish.

When the cycle of stops was completed on Lap 158, Cindric had cycled back into the lead. He was followed by Hemric and Jones.

During the stops, Herbst was penalized for speeding on pit road and had to make a pass-through penalty.

On Lap 179, Brandon Jones spun and wrecked in Turn 1 bringing out a caution. The lead-lap cars all pit with Cindric the first off pit road.

On the restart on Lap 188, Cindric was followed by Hemric, Burton and Briscoe.

Cindric hung on to the lead on the restart as Briscoe moved into second and both Gragson and Burton tagged the wall while racing for position.

With five laps remaining, Cindric’s lead over Briscoe had expanded to 1.2 seconds.

Cindric dominated on his way to the Stage 2 win, his fifth of the season.

Alfredo was second, Burton third, Briscoe fourth and Hemric rounded out the top-five.

Following the break between Stages 1 and 2, the lead-lap cars all pit with Gragson the first off pit road. However, he was penalized for speeding on pit road and had to restart from the rear of the field.

On the restart on Lap 53, Burton led the way, followed by Cindric and Herbst. Gragson restarted 23rd.

Cindric finally got around Burton entering Turn 1 on Lap 62 to take the lead for the first time in the race.

With 20 laps remaining in the second stage, Cindric held about a 1.3-second lead over Burton with Alfredo having moved up to third.

Alfredo moved into the second spot with 10 laps to go and began closing in on Cindric to challenge for the lead.

Gragson cruised to the Stage 1 win as Burton and Cindric battled it out for second place. The stage win was Gragson’s eighth of the season and third at Kentucky this weekend.

Burton ended up second, Cindric third, Alfredo was fourth and Jones rounded out the top-five.

Snider started on the pole thanks to a random draw but Jeremy Clements quickly took over the lead on Lap 2.

Ryan Sieg spun on the backstretch on Lap 4 to bring out the first caution of the race. The race returned to green on Lap 7 with Clements leading the way.

On Lap 11, Allgaier was forced to pit under green with a “serious problem,” which included his windshield getting hit by a brake rotor on the earlier run.

Gragson got around Clements on the outside on Lap 12 to take the lead for the first time.

NASCAR displayed a competition caution on Lap 21 to allow teams to check tire wear. Only a handful of cars elected to pit and Gragson continued to lead when the race returned to green on Lap 26.

With 10 laps remaining in the first stage, Gragson held a 1.2-second lead over Burton with Thursday night’s winner, Cindric, up to third.

Several drivers had to start the race from the rear of the field, including Hemric (driver change) and Allgaier, Colby Howard, Jones, Kody Vanderwal, Timmy Hill, Brandon Brown and Ronnie Bassett Jr. – all for moving to backup cars.