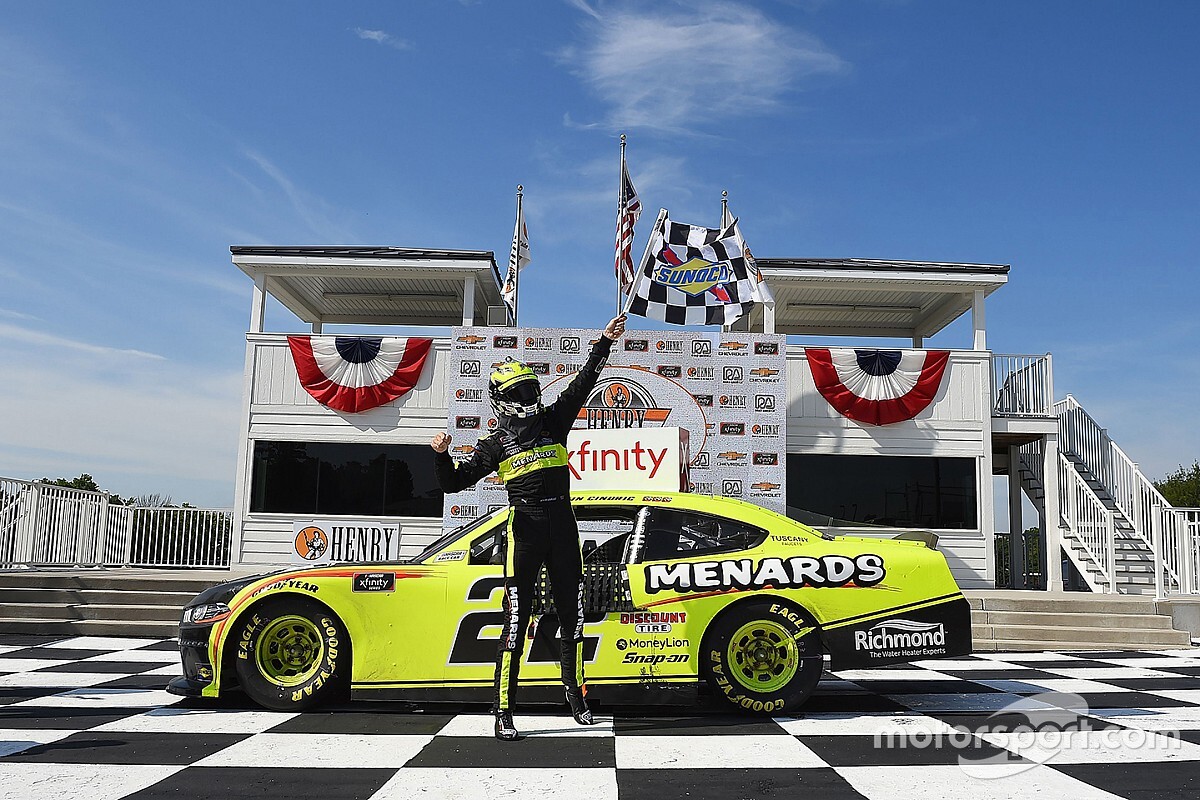 Austin Cindric grabbed the lead on a restart with two laps remaining and held on for the win in the NASCAR Xfinity Series race at Road America.

Cindric lined up third on the final restart but quickly got around leader Preston Pardus entering Turn 1 to take the lead.

He then spent the final lap holding off an aggressive challenge from A.J. Allmendinger and claimed his fourth series victory of the 2020 season and remarkably his first this year on a road course.

"We were able to get around (Pardus) and once A.J. got clear I knew I was running qualifying laps. This car was really fast on short runs," Cindric said. "Those guys brought a great package and I tried to mind my p’s and q’s and put together two of my best laps to come home with the win. I am over the moon about it. This is the first place I ran an Xfinity race and I feel like every time I have come here we have had a shot to win. It feels great to do it and do it in front of fans and a home crowd from Menards.

"When I have a team behind me like I do this year and those guys are so loyal to me and do such a great job with the tools that they have. When it comes to me, it is my job to do the best with the tools I have. I feel like from the start of this year I have been getting the most out of the cars I have been driving and it is gratifying to see the results. I look for that to continue. It is a really fun month of race tracks with the Daytona Road Course and Dover, one of my favorite tracks and a double header there.

"We have a lot of race tracks that I am really looking forward to closing out the regular season.”

The win is the sixth of Cindric’s career and first at Road America.

Following the break between Stages 2 and 3, teams ended up all changing over to normal tires and took on enough fuel that would allow them to finish the race.

On the restart on Lap 33, Grala led the way followed by Allgaier, Gragson, Cindric and Riley Herbst. Allmendinger lined up ninth.

Allgaier cleared Grala for the lead going through Turn 5 after the restart as Cindric moved into second. Cindric got around Allgaier in Turn 1 of Lap 34 to return to the lead.

With 10 laps to go in the race, Cindric had opened up a more than 2-second lead over Allgaier as Grala remained third and Briscoe moved into fourth.

With nine laps to go, Allmendinger moved into third, about 3 seconds behind the leader Cindric.

With seven laps remaining, Allmendinger had moved into second, about 3.8 seconds behind Cindric as Briscoe moved to third.

On Lap 40, Scott Heckert went off course and stopped on the track in Turn 6 which brought out the sixth caution of the race.

Many of the lead-lap cars elected to pit under the caution, but Pardus was among those who stayed out and inherited the lead. On the restart on Lap 42, Pardus was followed by Sieg, Josh Bilicki, Mike Wallace, Cindric and Allmendinger.

Grala and Justin Allgaier made contact shortly after the restart which sent Allgaier spinning into the wall in an incident that also collected Myatt Snider and Jeffrey Earnhardt. Jeremy Clements also went off course and wrecked in a separate incident.

Pardus led the way when the race returned to green with two laps remaining. He was followed by Sieg, Cindric, Briscoe and Allmendinger.

Cindric powered into the lead entering Turn 1 on the restart. Allmendinger moved back into second and began challenging Cindric for the lead with 1 lap remaining.

Allmendinger grabbed the Stage 2 win under caution after track workers had to extract Jesse Little’s car out of gravel trap in Turn 3.

Following the break between Stages 1 and 2, several teams took the opportunity to pit for fuel-only and Bilicki remained on the track and took over the lead.

On the restart on Lap 18, Bilicki was followed by Harrison Burton and Pardus.

Gragson got to the inside of Bilicki on Lap 21 to grab the lead for the first time in the race as Alex Labbe moved into second.

Later in the lap, Gragson and Bilicki both missed a corner and drove off track allowing Labbe to move into the top spot.

On Lap 22, Allmendinger moved into the second spot and wasted no time in getting around Labbe to take the lead for the first time in the race.

With five laps remaining in the first stage, Allmendinger had built a 1.3-second lead over Labbe as Gragson ran third. Several teams were making green-flag pit stops to change from wet weather tires to normal tires as the track was quickly drying out.

Among those who pit in the final laps of the stage to change to slick tires were Allgaier, Snider, Gragson and Cindric.

On Lap 27, NASCAR was forced to display a caution when Little went off-track in Turn 3 and his No. 4 car got stuck in the gravel trap.

Haley held off a charge from Cindric on a one-lap restart in the rain to claim the Stage 1 victory, his second stage win of the 2020 season.

Briscoe was third, Chastain fourth and Lally rounded out the top-five.

Bayley Currey’s No. 74 came to a stop off Turn 14 on Lap 3 which brought out the first caution of the race.

On the restart on Lap 5, Cindric led the way followed by Haley and Chastain.

On Lap 8 a caution was displayed after Daniel Hemric’s No. 8 Chevrolet came to a stop on the track apparently after blowing an engine.

While the race was under caution there was a lightning strike within 10 miles of the track, which forced NASCAR to red-flag the event for a minimum of 30 minutes. It turned out there were multiple strikes which led to a 1 hour, 33-minute delay.

Once the race returned to caution, NASCAR had declared the race under “wet” conditions, allowing crew chiefs to utilize wet weather tires if they so choose.

Most teams pit and took on the wet weather tires during the caution. Cindric remained the leader on the restart on Lap 12.

Cindric lost the lead on the restart to Haley and soon after the race was back under caution as Vinnie Miller’s No. 5 car blew an engine and came to a stop on the track.

The race returned to green with a one-lap dash to the end of the stage.

Snider started from the rear of the field because of unapproved adjustments to his No. 93 Chevrolet.