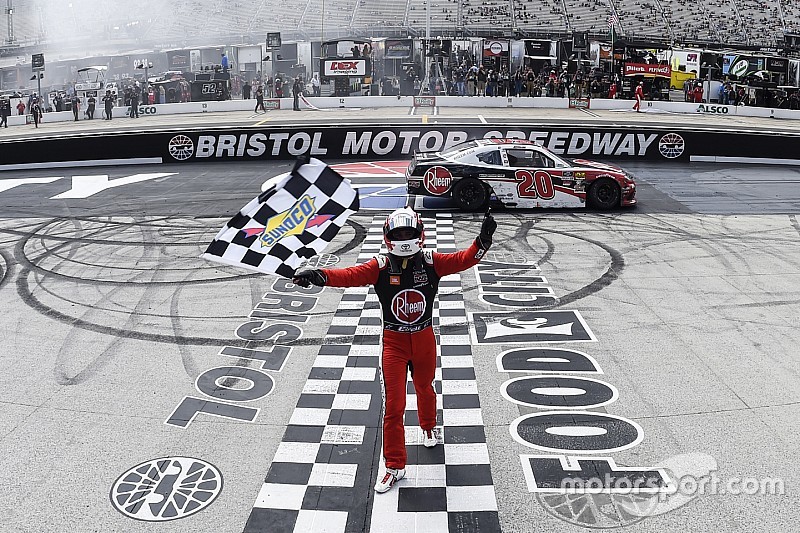 Bell passed Joe Gibbs Racing teammate Brandon Jones with 16 of 300 laps to go and held off Tyler Reddick to win Saturday’s Alsco 300 – a victory that also came with a $100,000 bonus from the Dash4Cash program.

The win is Bell’s second of the season, 10th of his career and first the .533-mile short track.

"That's pretty cool, getting my first win here and winning the Dash4Cash bonus," Bell said. "Thank you Xfinity for doing that. I want to thank everyone at Toyota and Joe Gibbs Racing - these Supras are super, super fast.

"JGR has a really good package at Bristol but for some reason we had some trouble trying to find that. I didn't feel good basically all practice and didn't qualify good. As soon as a got the green flag for the race, I was really, really loose.

"The longer the runs went, the better I got. I'm just thankful to be here at Joe Gibbs Racing, driving for such a wonderful team. My guys on pit road have been outstanding. It seems like week-in and week-out we've been able to pick up spots and that's huge - really huge."

Bell, Reddick, Custer and Briscoe will be eligible for another $100,000 Dash4Cash bonus next weekend at Richmond (Va.) Raceway.

After many laps running behind his rear bumper, Bell finally cleared Justin Allgaier for the lead on Lap 225.

Four laps later, Allgaier was forced to pit under green after he hit the wall and complained about having “no brakes.” Allgaier’s race was over after leading 138 laps.

With 60 to go, Bell held a small lead over Reddick with Custer in third and Briscoe in fourth.

On Lap 261, Harrison Burton had a tire go down and tagged the wall to bring out a caution. The lead-lap cars elected to pit and Bell was the first off pit road followed by Reddick and Custer.

Brandon Jones elected not to pit and held the lead on the restart with 32 laps to go.

With 25 laps remaining, Jones had opened up a small lead over Bell with Reddick running in third.

On Lap 283, Bell got around Jones to retake the lead. With 13 laps left, Jones went to pit road after tagging the wall.

Allgaier picked up the Stage 2 win when a late-stage caution prevented the race from being restarted.

Reddick was second, Bell third, Custer was fourth and Nemechek ended up fifth.

Following the break between Stages 1 and 2, all of the lead-lap cars elected to pit with Allgaier the first off pit road.

On the restart on Lap 100, Allgaier was followed by Reddick and Bell. Custer had to pit again to repair damage he suffered from an earlier run-in with the wall.

With 60 laps left in the stage, Allgaier maintained a small lead over Reddick with Nemechek in third and Briscoe in fourth.

Reddick had closed back to Allgaier’s bumper with 40 laps remaining in the stage. Nemechek was third and Bell had moved back up to fourth.

Custer had rebounded back to fifth with 35 laps to go. Bell moved back into the third position on Lap 142.

With 25 laps remaining in the second stage, Allgaier continued to hold a small advantage over Reddick with Bell running in third and Nemechek in fourth.

Jeremy Clements spun going into Turn 1 on Lap 165 to bring out a caution.

Allgaier passed Reddick on the backstretch on the final lap to take the Stage 1 victory.

Custer was third, Burton was fourth and Austin Cindric completed the top-five.

Custer, the pole-winner, led the first 25 laps until Reddick used went three-wide near the start-finish line to take the lead for the first time on Lap 26.

Custer dropped back to third as Allgaier moved into second.

On Lap 42, Ross Chastain and Jeff Green wrecked off Turn 2 while running 13th to bring out the first caution of the race. “Something broke,” Chastain said of Green’s car over his radio.

Reddick continued to lead the way on the restart on Lap 50, followed by Allgaier and Custer.

With 25 laps to go in the first stage, Reddick held a small lead over Allgaier. Custer was third, Burton fourth and Cindric fifth.

Allgaier closed to the back of Reddick’s bumper with 15 laps remaining in the stage. Custer remained in third.

Four cars had to start the race from the rear of the field – Zane Smith and Joey Gase for engine changes; David Starr for moving to a backup car; and Jeremy Clements for unapproved adjustments.

Michael Annett finally feels like a contributor at JR Motorsports

Kaz Grala: Move to RCR has “validated my confidence”