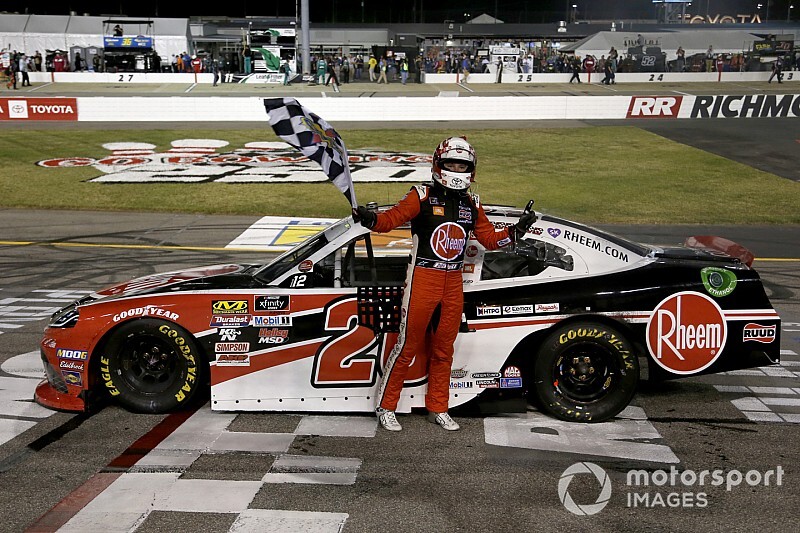 There was no way Christopher Bell was going to let this win get away.

Bell kicked off the 2019 NASCAR Xfinity Series playoffs in dominating fashion Friday night, leading 238 of 250 laps and cruising to victory in the GoBowling.com 250 at Richmond (Va.) Raceway.

The victory locks Bell into the second round of the playoffs, regardless of how he finishes in the next two races

The win is Bell’s series-leading seventh of the season and 15th of his career.

“That one was pretty special,” Bell said. “Going 92 laps straight there (to finish the race) was really difficult, we were sliding all around.

“I felt like if I could get to traffic I would be in good shape because my car could really move around good. I could run up (the track) and I could run down. (Custer) was keeping pressure on us pretty good but this Supra was too good.”

Asked if he felt he had thrown the gauntlet down Friday night, Bell said: “Man, we’ve been really, really fast really all year long but the last three races we had an opportunity to win. I’m glad we got it done today.”

With 50 laps remaining in the race, Bell maintained a 1.2-second lead over Custer as Allgaier ran in third. Cindric was fourth and Briscoe fifth.

With 30 to go, Custer’s deficit remained about the same and Cindric was in third, 6 seconds behind the leader.

After 240 laps, Bell’s lead had grown to 2.9 seconds over Cindric, who had moved into the runner-up position ahead of Custer.

Bell continued to dominate, earning the Stage 2 victory with a more than 3-second lead over Custer.

Following the break between Stages 1 and 2, all of the lead-lap cars elected to pit, with Cindric the first off pit road. The race returned on green on Lap 83 with Jones in the lead as he stayed out.

On Lap 87, Custer made his way into the second position as Cindric ran third.

With 50 laps remaining in the second stage, Bell maintained a small but steady lead over Custer as Cindric ran third.

After 110 laps, Bell finally opened up a 1-second lead over Custer. Cindric was third, Allgaier fourth and Briscoe fifth.

With 15 laps to go in the stage, Bell had opened up a more than 3-second lead over Custer as Allgaier moved into third.

Cindric started on the pole and led the first lap but Mike Marlar spun on the backstretch to bring out a caution. The race returned to green on Lap 6, with Cindric in the lead followed by Bell and Burton.

Bell got around Cindric on Lap 8 to take the lead for the first time.

On Lap 19, Burton cleared Cindric to take the second position as Cindric dropped to third.

With 50 laps to go in the first stage, Bell had moved out to a 3.2-second lead over Burton with Cindric still in third.

After 40 laps, Bell’s lead had ballooned to more than 6 seconds as Harrison Burton and Cindric closed up again to battle for second place. On Lap 43, Cindric got back around Burton to reclaim the second spot.

On Lap 51, Vinnie Miller hit the Turn 2 wall which brought out the second caution of the race. Only a handful of cars elected to pit which left Bell in the lead when the race returned to green on Lap 58.

Tyler Matthews wrecked in Turn 2 on Lap 60 to bring out another caution. Bell continued to lead the way when the race restarted on Lap 68.