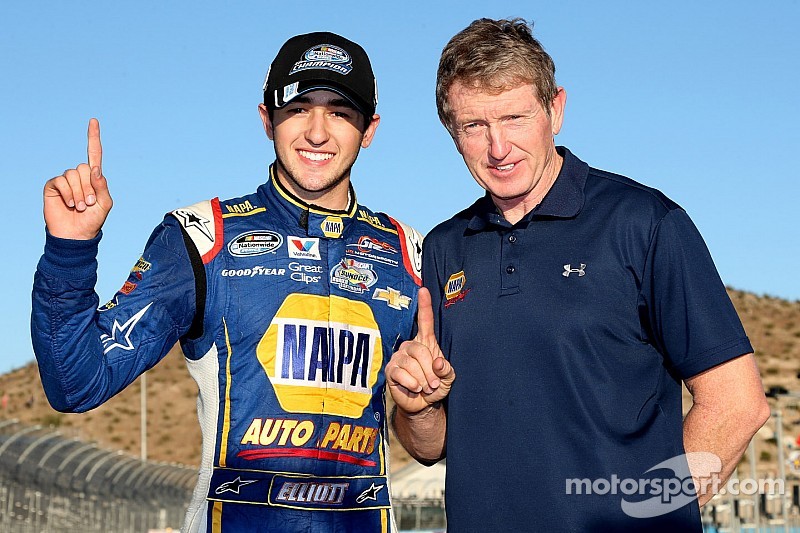 What do you do when you accomplish your goals a year early?

That’s a question Chase Elliott will have to answer, now that the presumptive rookie of the year in the NASCAR Nationwide Series is also the series champion—and the youngest champion in NASCAR national series history.

In a season that saw Elliott win back-to-back races at Texas and Darlington and add a victory at Chicagoland, the driver of the No. 9 Chevrolet closed out teammate Regan Smith (10th Saturday) to give JR Motorsports its first title in one of NASCAR’s top three national touring series.

JR Motorsports co-owner Rick Hendrick affirmed after the race that the plan is still to run Elliott full-time in the Nationwide Series next year, doubtless with a few Sprint Cup starts mixed in. But what’s left for the scion of former Cup champion Bill Elliott to accomplish?

“That’s a really good question,” Elliott said after the race. “I don’t know what tomorrow brings, so I have no idea what the future has in store for myself or our team or whatever. The biggest thing is just trying to make the most of what’s going on now and kind of letting it figure itself out.

Next year, go for another

“Hopefully, next year we’re able to go and have the same result, a championship, with some more wins. I feel like that’s the biggest thing. We’d like to win some more races, and we’ve got one more week to try to get another one before this season’s over with.”

Elliott will have a new crew chief next season, with his current pit boss, Greg Ives, ready to succeed Steve Letarte on JRM co-owner Dale Earnhardt Jr.’s No. 88 Hendrick Motorsports Chevrolet in the Sprint Cup Series.

Earnhardt said Bill Elliott’s support for his son has been invaluable to the championship effort.

“I had a real high opinion of Bill before I got the chance to know him, and this has allowed me to get to know him quite well, and my opinion of him is even better now, because he’s been such a great support for, not only his son, obviously, but for us.

“Some of those fathers can be a handful, but, man, he has been an asset to us, and he’s so helpful with Chase, keeping Chase so calm and grounded. Everything’s so easy with them. I think, once I retire, I’m going to be a Chase Elliott fan, so I’ll still have somebody to pull for going down the road.”

Earnhardt believes that Elliott, even at 18 already combines raw natural talent with racing wisdom beyond his years.

“He’s an amazing talent, very young, but still very mature. Takes good care of his equipment. If you can wrap up a championship before the season’s over with, you’re definitely smart and very calculative. That’s something you learn. That’s something you’re not born with.

“You’re born with the speed, the raw talent, but he’s already got all the other things, too, well before his time.”

Kyle Busch, who like Earnhardt has an eye for young talent and a penchant for launching the careers of promising drivers, feels Elliott is ready to advance to the Cup level. There’s only one problem. There’s no place for Hendrick to put him.

“He’s ready,” Busch asserted. “I finished second to (Martin) Truex in my first (NNS) season, and they bumped me up to Cup, whether I was ready or whether I wasn’t ready. We had some success that year.

“I think Chase could have probably more success than what I had in Cup in my rookie year.”