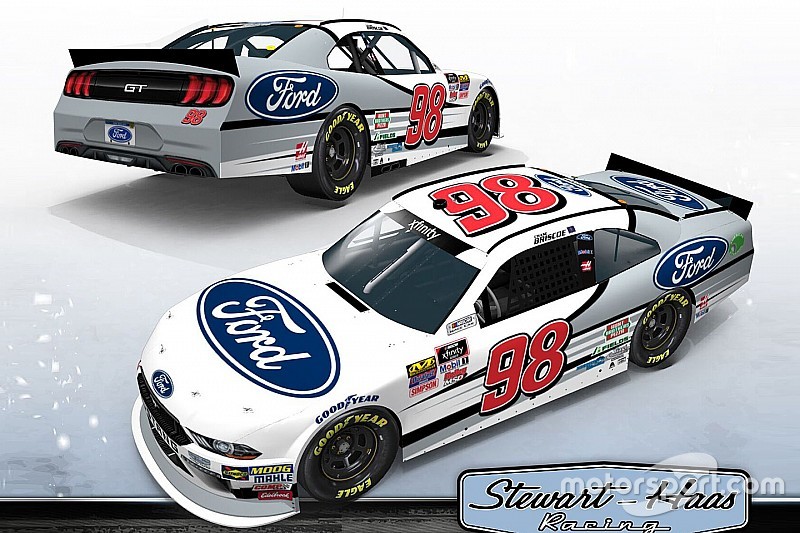 Stewart-Haas Racing, in association with Biagi-DenBeste Racing, will field the No. 98 Ford Mustang for Chase Briscoe in the NASCAR Xfinity Series later this year.

The 23 year-old will make his first appearance behind the wheel of the No. 98 at Bristol Motor Speedway in April and as a teammate to championship contender Cole Custer.

Additionally, he will compete at Talladega Superspeedway and Charlotte Motor Speedway in May, as well as the September Charlotte race before making his fifth start at Kansas Speedway in October.

Briscoe, who ran full-time in the Camping World Truck Series last season (winning the season finale at Homestead-Miami Speedway), made his Xfinity debut with Roush Fenway Racing earlier this year at Atlanta Motor Speedway. He started 18th and finished 15th.

“I’ve worked hard to get where I am, but I’ve also benefited from a lot of people having faith in me,” he said. “I hope to reward everyone for their efforts. For Stewart-Haas Racing, that starts at Bristol.”

Briscoe is also thrilled to be able to race for one of his "idols" in Tony Stewart, co-owner of Stewart-Haas Racing with Gene Haas.

“If you grow up in Indiana racing sprint cars and you want to make a name for yourself in NASCAR, I don’t think there is anyone better to be around than Tony Stewart,” said Briscoe, whose family has a history in sprint car racing dating back more than four decades. “He’s one of my idols. To get the opportunity to drive a Ford for his race team is beyond my wildest dreams. I can’t wait to get into the No. 98 Ford Performance Ford Mustang at Bristol and the other races they have slated for me. I realize what an opportunity Ford and Stewart-Haas Racing have given me.”

Before moving up to the national divisions of NASCAR, Briscoe won the ARCA Racing Series championship in 2016, winning six races that season.

“Watching him in the Truck Series, it’s easy to see his talent,” said Greg Zipadelli, vice president of competition, SHR. “He’s done a great job for his amount of experience. He has a good head on his shoulders and is a racer at heart. That’s the kind of people we surround ourselves with at Stewart-Haas Racing.”