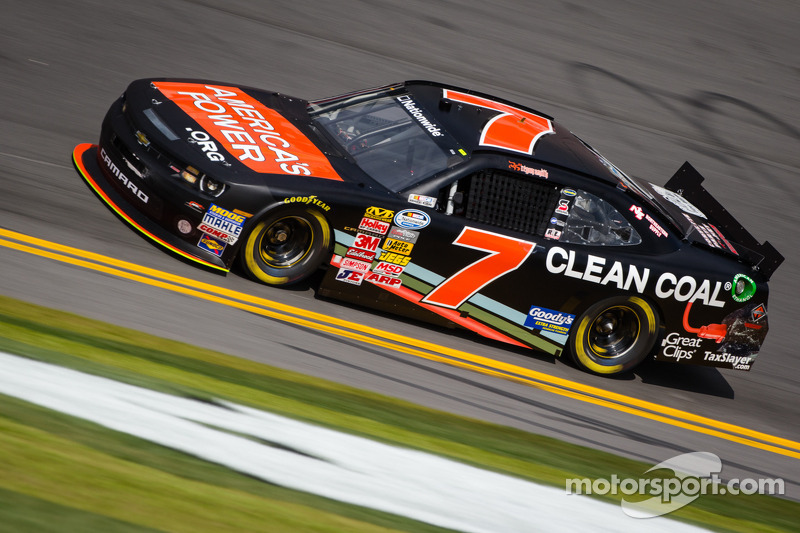 NASCAR Nationwide Series Subway Firecracker 250 is the night race at the Daytona International Speedway. Regan Smith holds lead in the standings but only by eight points.

Two weeks ago, Regan Smith was enjoying a 58-point lead over Sam Hornish Jr. heading into the 14th race of the season at Road America. However, after a 32nd-place finish at the Wisconsin road course and a 30th-place finish in last Friday’s race at Kentucky, Smith’s comfortable advantage has all but evaporated.

Heading into Daytona for Friday night’s NASCAR Nationwide Series Subway Firecracker 250, Smith’s lead now stands at only eight points. What’s more is that his past two performances have allowed other drivers to enter into the championship conversation. Currently, seven drivers are within 50 points of Smith. At this point last season, only three drivers were within 50 points of the leader, Austin Dillon.

What’s even more telling about Smith’s recent fade back into the pack are the performances of the seven drivers trailing him. Over the past two races only two of those drivers, Justin Allgaier, who is currently third in points (-11), and Parker Kligerman, who is seventh in points (-46), have had finishes outside of the top 10, finishing 13th and 16th, respectively.

Hornish finished fifth and ninth in the last two races, while Allgaier finished second at Road America to go along with his 13th at Kentucky. Elliott Sadler, who is fourth in the standings 19 points back, finished ninth and second at Road America and Kentucky, respectively. Dillon finished 10th and sixth in those races and sits fifth in the standings (-20). Kyle Larson has a pair of seventh-place finishes and is 44 markers off the lead in sixth place. Kligerman finished third at Road America before his 16th-place performance at Kentucky. Former series champion Brian Vickers is 48 points behind Smith in eighth and his two most recent finishes were sixth and fourth.

Smith and Hornish are the only drivers of the eight with victories thus far this season; Smith has two while Hornish has one. If Smith is to hold on to his lead, he’ll need to put the last two races in the past and start running again like he did earlier in the season when he had 11 consecutive top-10 finishes.

Friday’s race marks the official first leg of Nationwide’s popular Dash 4 Cash program. Last Friday, Sadler, Vickers, Dillon and Larson all qualified to be participants in the first week of the bonus program by finishing second, fourth, sixth and seventh, respectively, in the Feed the Children 300 at Kentucky. They were the top-four points-eligible finishers in the NASCAR Nationwide Series, thus making them eligible to compete in the first event of the 2013 Dash 4 Cash.

Of the four eligible drivers, the one who finishes highest in the Daytona race will win the bonus and automatically qualify for the next event at New Hampshire Motor Speedway. The three other highest finishing NASCAR Nationwide regulars at Daytona will also qualify to compete for the bonus at New Hampshire. The format will remain the same for the Chicagoland and Indianapolis races, the last two legs of the Dash 4 Cash program.

If one driver wins the bonuses for the first three races and then wins the Indianapolis race outright, Nationwide Insurance will award the driver an additional $600,000, totaling $1 million in winnings.

Larson Continues To Impress During His Rookie Season

Over the past seven races Sunoco Rookie of the Year standings leader Kyle Larson has been on a bit of a tear, finishing in the top 10 in all seven races. Last Friday at Kentucky he finished seventh for the second straight week.

Through the first 15 races of the season, he has four top-five finishes and 10 top-10 finishes, including a pair of runner-up performances at Bristol and Michigan. Larson will make his second national series Daytona start this Friday in the Subway Firecracker 250. In the 2013 season opener, he finished 13th.

In the rookie of the year race he has 200 points, 51 and 56 points in front of his two closest competitors, Alex Bowman and Nelson Piquet Jr. Bowman finished third in the 2013 DRIVE4COPD 300 at Daytona, while Piquet finished 11th.

Kligerman hopes for success at Daytona 250