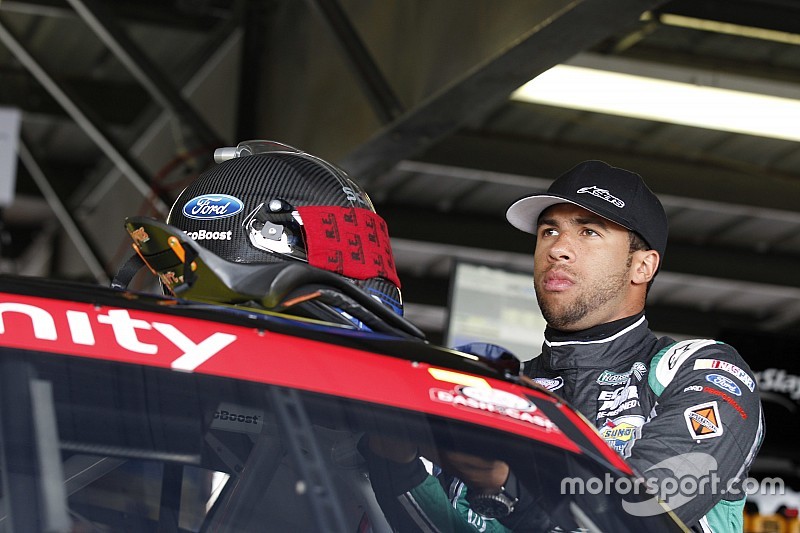 DOVER, Del. — Prior to Darrell Wallace Jr.’s run in with Chris Buescher on Lap 190, the driver of the No. 6 Ford wasn’t happy with his car.

But “Bubba’s” day went downhill from there.

Making contact with his Roush Fenway Racing teammate with nine circuits remaining in Saturday’s XFINITY Series race at Dover International Speedway — and watching Buescher continue on and win — only exacerbated the problem.

Wallace started from the pole and led three times for a total of 52 laps. When he was passed not long after the Lap 106 restart, Wallace radioed to the crew, “Dirty air is killing us. We have to fix it for the next race.”\

Wallace regained the lead on Lap 183. As the strategy for the RFR Fords evolved into a fuel mileage contest between Wallace and Buescher in the closing laps, the Nos. 6 and 60 made contact while running side-by-side and damaged Wallace’s tire. Wallace was forced to pit, then charged with a commitment line violation — which resulted in a Pass Thru penalty — and finished 17th.

After the race, Wallace acknowledged he had not reviewed the incident but wasn't pleased with the outcome.

We just got run over. It sucks that it was my teammate.

“I was saving fuel there and Chris just ran over me and he ends up winning,” Wallace said. “It should be interesting Monday morning. We just got run over. It sucks that it was my teammate. I thought he got help from the 7 (Regan Smith) but I just saw the replay there. I was saving fuel. I didn’t think I was holding him tight and the next thing you know we are almost in the fence.

“The crappy part about it is we had a really strong Ford EcoBoost Mustang and we couldn’t get off pit road to save us and we got caught in dirty air and then we were in fuel saving mode. I thought we were doing okay until that little incident. I would say I am happy Roush won but I am not.”

Wallace told the team on the radio, “That was the third straw, we need to start making changes, bud.” Wallace added that he wasn't sure how he would handle the situation with Buescher moving forward.

“I have been racing with Chris a lot so I don’t know. I might phone call into the Monday morning meeting. We will see.”

Buescher, who started second, earned his win of the season, his third career victory and extended his points lead over Ty Dillon by 15. He described the contact with his teammate as “tough”.

I couldn’t do anything with the track being pretty narrow and two guys racing for the win.

“We are sitting there and he was saving a lot more fuel than I was because they were shorter and I was able to run into the corner harder but I couldn’t do anything with the track being pretty narrow and two guys racing for the win,” Buescher said. “We got side by side and it got pretty free but this Roush Mustang was good all weekend.

“The race wasn’t exactly where we needed to be but then Scott pulled great strategy and the team did a nice job and we got to victory lane with this Ford.”

If the situation was tough for the drivers, it was equally difficult for team owner Jack Roush. This isn't the first time the veteran boss has had to soothe his racer's hurt feelings.

“I had the horror of seeing two of my cars and the image in my mind of them running out of gas on the beginning of the last lap,” team owner Jack Roush said. “As it turned out, Bubba had a flat tire which was unfortunate.

“My 28 years of being in the business here racing these NASCAR cars that is the first time we have had an incident between two of our cars that resulted in one of them not being able to finish due to a flat tire. We will have to sort that out.

"I know that nobody meant to have contact. Bubba didn’t and certainly Chris didn’t. We will have to work on the feelings and get everybody feeling good about being teammates going forward.”