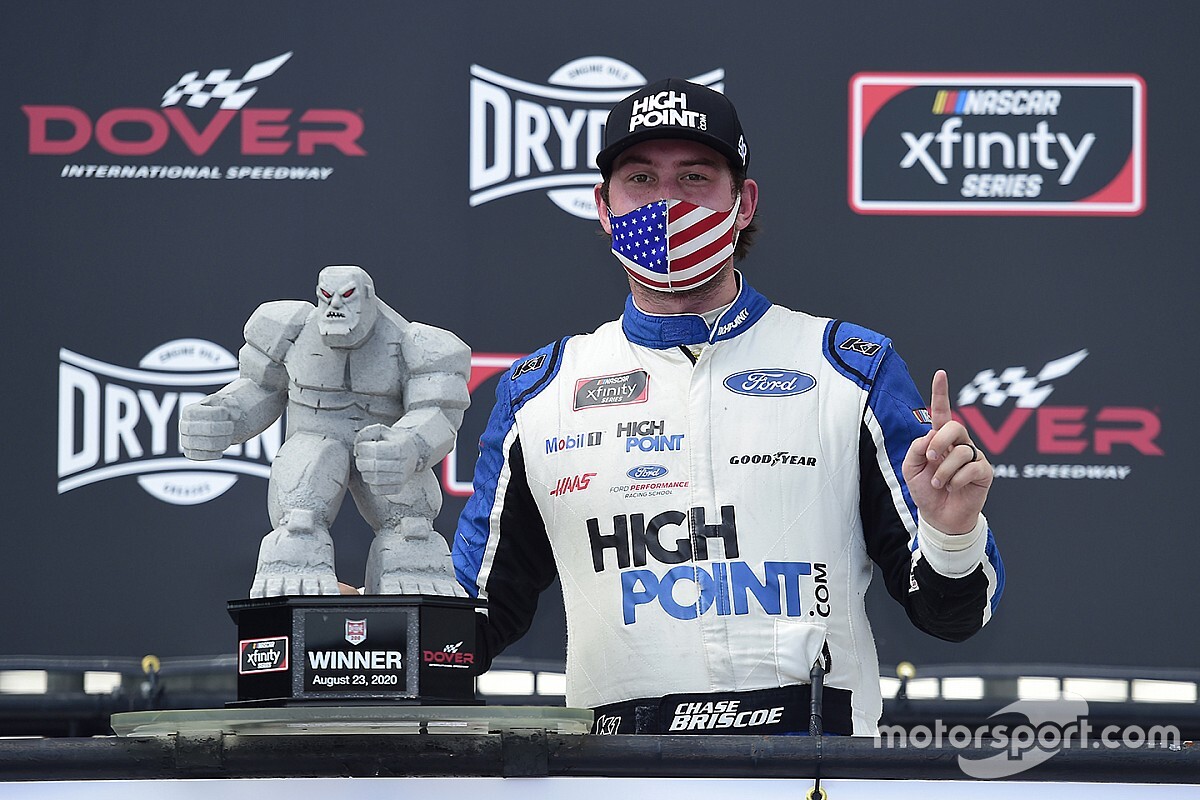 Chase Briscoe went from the back to the front to earn his NASCAR Xfinity Series-leading sixth victory of the 2020 season.

Briscoe started Sunday’s Drydene 200 from the rear of the field after an on-track incident in Saturday’s race forced his Stewart-Haas Racing team to move to a backup car.

Briscoe took control of the race late in Stage 2 and never looked back as the final 110-lap stage went green the entire way.

Following a round of green-flag stops, Briscoe took the checkered flag more than 2.4 seconds ahead of Ross Chastain.

The win is Briscoe’s sixth of the season, breaking a tie with Austin Cindric for the most this season and his eighth win of his career.

“I told (my wife) I was so mad after yesterday, I had to go win. It’s a testament to my guys to pull a backup out and it was better than our primary (car) I thought,” Briscoe said. “Pretty cool to win from the back here in a backup.

“We haven’t won in a month and a half but it feels like five years. I feel like we’re back where we were at the beginning of the year. Truthfully, this felt like the most dominant car we’ve had all year long.

“Hopefully, we can continue that trend.”

Following the break between Stages 2 and 3, all the lead-lap cars pit with Briscoe the first off pit road. Jones and Hemric made contact as both exited pit road.

Allgaier had to restart from the rear of the field after his team received a penalty for an uncontrolled tire penalty.

On the restart on Lap 98, Briscoe was followed by Cindric and Chastain.

With 80 laps remaining in the race, Briscoe had expanded his lead to more than a second over Chastain with Cindric in third.

On Lap 137, Allgaier had made his way back up into the top-10 after his penalty on pit road.

With 60 laps to go in the race, Briscoe’s lead over Chastain was more than 2 seconds as Cindric remained in third, 4 seconds behind the leader.

After 160 laps, Briscoe maintained a 1.4-second lead over Chastain with Cindric third, Hemric and Burton.

Hemric kicked off the final round of green-flag pit stops on Lap 164 to take tires and fuel to make it to the end of the race.

Harrison Burton had to make a pass-through penalty on pit road for a commitment line violation while making his initial green-flag stop.

With 20 laps to go in the race, the top four cars had still not pit and Briscoe was highest in the running order among those who had pit.

Once the cycle of stops was completed on Lap 189, Briscoe had almost a 3-second lead over Chastain with Cindric close behind in third.

After starting the race from the rear of the field, Briscoe grabbed the lead late and held off Allgaier for the Stage 2 win.

Chastain was third, Cindric fourth and Gragson rounded out the top-five.

Following the break between Stages 1 and 2, all lead-lap cars decided to pit with Jones the first off pit road with a two-tire pit stop.

Herbst was penalized during his stop for an uncontrolled tire and Jesse Little was penalized for speeding on pit road. Both restarted from the rear of the field.

Jones led the way on the restart on Lap 53, followed by Allgaier and Chastain.

Allgaier, who took four new tires on his stop, quickly got around Jones on the restart and grabbed the lead for the first time in the race.

On Lap 65, caution was displayed following an accident involving Jeffrey Earnhardt and Herbst in Turn 2. The race returned to green on Lap 70 with Allgaier out front.

On Lap 71, Briscoe – who started from the rear of the field – went to the outside of Allgaier and claimed the lead for the first time in the race.

With five laps remaining in the second stage, Briscoe’s lead over Allgaier remained at half-a-second. Chastain remained in third.

Chastain cleared Moffitt on a late restart and held off Allgaier to take the Stage 1 win, his first of the 2020 season.

Moffitt was third, Herbst fourth and Gragson rounded out the top-five.

Moffitt, who started on the pole, led the way until the first caution was displayed on Lap 12 when Vinnie Miller slammed into the Turn 3 wall following contact with Earnhardt.

Most lead-lap cars remained on the track and Moffitt remained out front when the race returned to green on Lap 16 followed by Justin Haley and Herbst.

On Lap 21, NASCAR displayed a caution to allow teams to check tire wear. Again, most teams stayed on the track but Jones was among those who elected to pit. Burton had to restart from the year after a violation of the choose rule.

Moffitt led the way on the restart on Lap 26, followed by Chastain.

Chastain powered into the lead on the restart as Moffitt dropped to second and Allgaier moved into third.

With 15 to go in the first stage, Chastain had built up a 1-second lead over Moffitt.

Allgaier moved into the second spot behind Chastain with five laps remaining in the stage.

Briscoe and Hemric both had to start the race from the rear of the field – Briscoe for moving to a backup car and Hemric for a driver change.

Allgaier scores first Xfinity win of the 2020 season at Dover