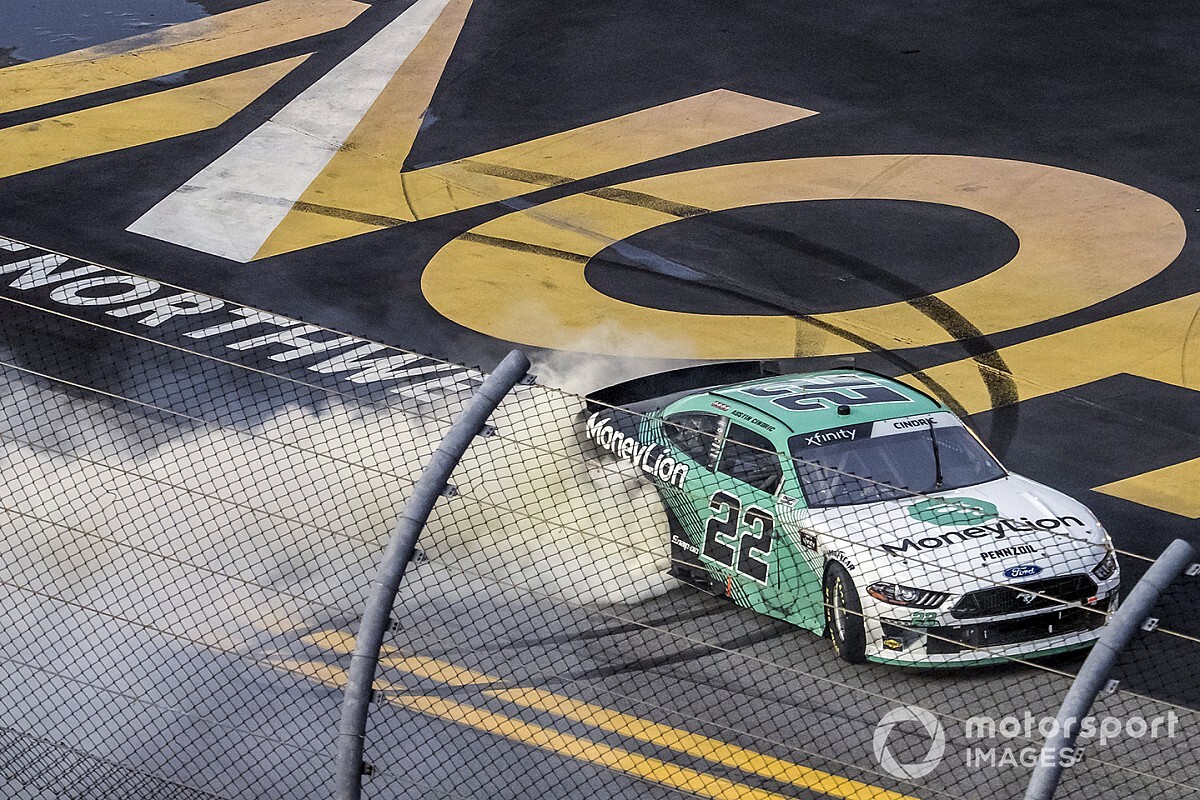 Austin Cindric's victory in Saturday's NASCAR Xfinity Series race at the Daytona International Speedway (Fla.) Road Course is his fifth in the last six races, matching a record set by Sam Ard in 1983.

Cindric's worst finish in the last six races is second, continuing the streak with another win Saturday in the first ever NXS race on the Daytona Road Course.

He battled with Chase Briscoe throughout the event and after a late-race incident eliminated Briscoe from contention, Cindric was able to cruise to the checkered flag.

"Not sure anyone was really happy with their race car.  Unfortunately, I have a tough perspective of driving really fast high-grip race cars at this track, but great credit to my team -- the MoneyLion guys -- and everyone that puts this together -- Ford Performance, Roush Yates Engines, obviously everyone at Team Penske for working hard," said Cindric. "That’s five wins on the year and back-to-back now.  I’m really proud of that.  I didn’t feel like I drove my best today, but we executed there at the end where it counts and that’s what makes these races so difficult to win.”

He later added: "I think we dug ourselves two holes there. Staying out got us a good stage point there.  That’s important and then I probably grabbed a shovel and dug us a little bit bigger of a hole there on the restart in trying to win that second stage. That put us behind a little bit and maybe I wasn’t able to be as ahead of my adjustments, but, overall, I’m super-excited for five wins on the year so far and adding to the points. To get MoneyLion in VIctory Lane again at Daytona of all places, I wish there were fans here to see this race because it was a thriller.”

After a lengthy delay for lightning, the race finally got underway with a damp race track.

Gragson was able to take over the lead as both Briscoe and Cindric ran wide through Turn 1. However, Cindric swiftly reclaimed the top spot.

The race went fairly green in the early running, but several drivers including Briscoe were forced to stop on track after missing the frontstretch chicane.

As the stage neared its end, things went very wrong for the Kaulig Racing team. Ross Chastain slowed from third place with a broken transmission. Soon after, his teammate Justin Haley went airborne as he clipped the wet grass in the backstretch chicane, tearing off the front of his car and spinning.

The third Kaulig entry, driven by A.J. Allmendinger, opted to pit before the caution flag flew. The strategy appeared to work, but Allmendinger pulled away with the fuel can still connected. NASCAR penalized the team a full lap for servicing the car outside the box.

It became a one-lap dash for the stage win, which was won by Cindric. He was followed by Gragson, Jade Buford, Herbst, Earl Bamber, Allgaier, Briscoe, Brandon Brown, Michael Annett and Lally.

Gragson was back in control of the field for the start of the second stage. Herbst spun from inside the top-five after contact with Bamber, but was able to continue. Soon after, Gragson ran wide and spun into the tire barrier entering in the kink, handing the lead to Briscoe.

The caution flag then flew once again, this time for a stalled car. Briscoe now led the race from Bamber, but the following run was short-lived. Tommy Joe Martins, Jesse Little and Josh Williams all spun in separate incidents and the yellow was thrown for debris.

On the radio, Cindric expressed displeasure with Briscoe blocking under braking and threatened to wreck the SHR driver should that happen again. In a bit of a comedic moment, he also threw his water battle at the side of Briscoe’s car during the caution period.

The final stage went green at first as Briscoe continued to lead from Cindric. Allmendinger rode comfortably in third as the leaders focused on saving fuel.

Herbst spun from fourth entering the backstretch chicane, and spun again a couple laps later, but neither incident forced a yellow.

However, the caution flag flew with nine laps to go when Bamber crashed in the backstretch chicane and was unable to get back to the pits.

Briscoe led most of the field down pit road, and won the race off pit road. Three drivers stayed out and it all went wrong as the front of the field blew Turn 1 on the restart. Brandon Jones moved into the lead as Briscoe spun. Several other incidents flared up and the caution flag was displayed. Briscoe’s race was over after damage sustained in the restart melee.

Allmendinger made contact with Allgaier, spinning him as he battled for third place. The two drivers had words post-race.

Meanwhile, it was smooth sailing for Cindric as he collected his fifth win of the 2020 season and the seventh of his career, a full seven seconds clear of the runner-up finisher.