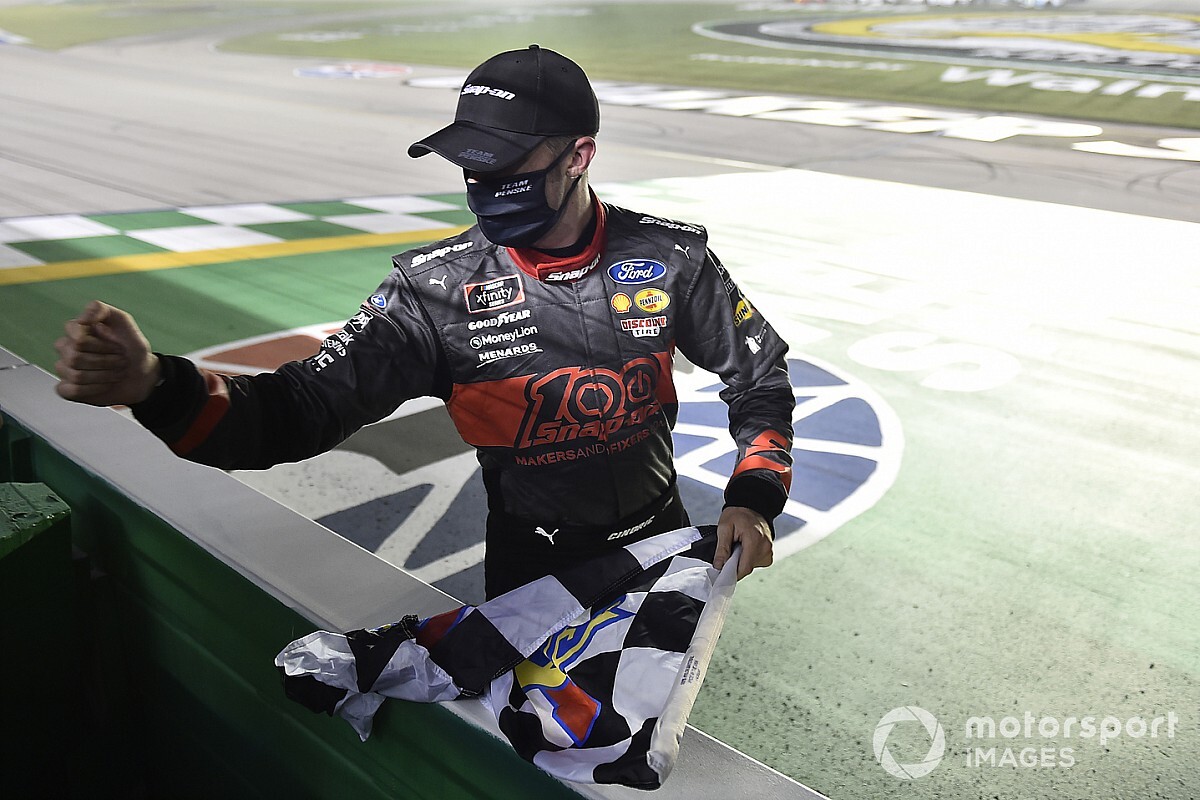 After three consecutive Xfinity Series wins and a runner-up finish, Austin Cindric now leads the series standings but he may just be heating up.

The timing couldn’t be better for Cindric, now in his third fulltime season in the NASCAR Xfinity Series.

The 21-year-old son of Team Penske President Tim Cindric is enjoying his most successful year of NASCAR competition, has earned his first three oval track wins and is poised for even more success as the series heads into a pair of road course events.

Until his sweep of the doubleheader at Kentucky Speedway and subsequent win at Texas, Austin had never won on an oval in any NASCAR series. In the last several years, he had earned road course victories in the Xfinity Series, Trucks and K&N Pro Series East (now ARCA East).

Cindric had a mostly sports car racing background and put it to good use once he ventured into NASCAR. Now that he’s shown he is equally capable on ovals, the potential of his NASCAR future seems limitless.

After winning twice at Kentucky, Cindric said he already considered himself a “true” NASCAR competitor but understood why fans may now see him in a different light.

“I feel like in a lot of peoples’ minds and maybe some of the fans’ minds this probably solidifies myself in a sport that races mostly in circles you’ve got to be good at racing in circles,” Cindric said after his second Kentucky win. “You’ve got to put numbers on the board and that’s what we’ve done this weekend.

“I feel like (the first Kentucky win) was probably validation in that aspect for myself and (the second) was all about my team. It’s so unbelievable that car has been able to be that fast and that close and be able to execute that well from pit road … I’m just so proud to be the driver of that car.

“It’s a team that has been built around me and that’s something I’m proud of and something I’m very grateful for. A lot of drivers don’t get that opportunity and I feel like I’ve taken advantage of it in every facet to be positioning myself in this spot.”

Cindric came close to making it four consecutive oval track wins Saturday, getting passed on the last lap in double overtime by Brandon Jones at Kansas and ended up second. In 17 races this season, he’s only finished outside of the top-10 four times.

That kind of consistency – as well as the wins – is what championships are built on. The bonus points from winning stages (he won two more at Kansas) and races will help advance in the title chase later this season.

Even with everything Cindric has already accomplished this season, he only now is entering into a part of the season where he was already favored – the majority of the Xfinity Series’ road course races.

In the only one so far, Cindric finished fifth and led 21 of 62 laps in the series’ inaugural race on the road course at Indianapolis Motor Speedway earlier this month.

Looking ahead to two weeks of road racing

After some reshuffling of the schedule due to the COVID-19 pandemic, the series now turns to Road America on Aug. 8 and a visit to the Daytona International Speedway’s road course on Aug. 15.

Cindric will likely be highly favored in both.

“I made my first Xfinity start at Road America and we’ve had quite a few things not go our way there between being the leader on the strategy and a tire going down to blowing the motor in the lead, coming up one spot short last year,” he said. “So, I’d definitely like to be able to go there and contend for a win.

“Daytona road course, definitely an interesting one to not have practice. I don’t expect it to take too long for people to get up to speed. There are like six corners and a lot of straightaways, so I’m not too concerned about that. It’s just putting myself in position – the same thing.

“I can look on the flip side and it replaces a race track (Watkins Glen) that we won at last year, so, either way, we show up with the best package and go racing.”

With three intermediate tracks and one road course (Charlotte Roval) scheduled in the Xfinity Series’ playoffs this season, Cindric should be well-positioned to contend for his first NASCAR championship.

“It’s great to be able to capitalize on fast race cars,” he said. “Being able to run up front all day and getting great stage points and having a say in things all race is great.

“We’ve just got to keep going about that.”