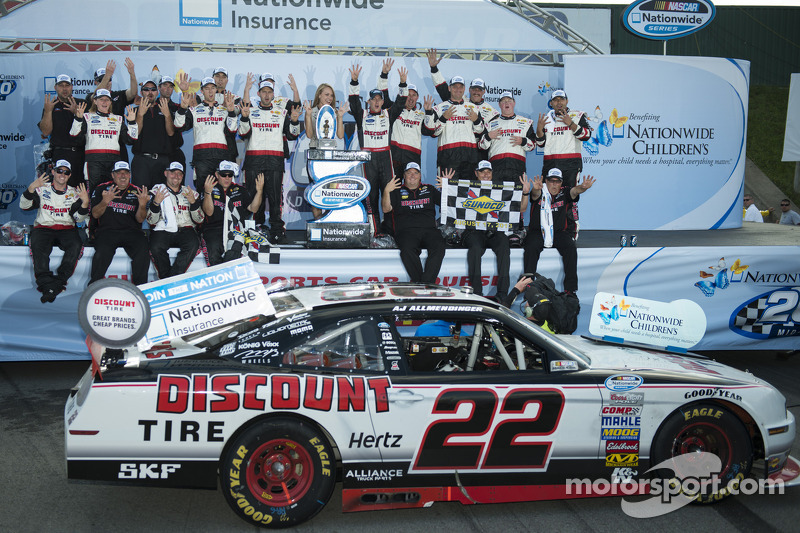 Twice this year, Allmendinger drove the No. 22 Penske Racing NNS car, and both times on road courses that he raced on many times in the past.

Apparently two races are all A.J. Allmendinger needs to claim two NASCAR Nationwide Series wins. After claiming his first win behind the wheel of the No. 22 Penske Racing Ford entry at Road America in Elkhart Lake, Wis., in June, he returned to the seat of the No. 22 for the second time this season on Saturday for the Nationwide Children's Hospital 200 at Mid-Ohio in Lexington.

Allmendinger dominated the Mid-Ohio race, leading 73 laps en route to his second win in only his second start of 2013 with Penske.

"This Discount Tire Ford was just like at Road America; it was awesome," Allmendinger said.

The win gave Penske's No. 22 a sweep of the three series road course events, with Allmendinger winning two of them and Brad Keselowski winning last weekend at Watkins Glen (N.Y.) International. It also gave the No. 22 the owner points lead. The No. 54 Joe Gibbs Racing Toyota team headed into the race with a scant lead, but wound up finished the race 23rd after driver Owen Kelly spun into a sand trap on the final lap.

"For Penske to sweep all three of these road courses just says how awesome these cars are," Allmendinger said.

Michael McDowell matched his career-best finish of second from behind the wheel of the No. 18 Joe Gibbs Racing Toyota, and the No. 12 Penske Racing Ford of Sam Hornish Jr. finished third.

"The first lap of each restart and the initial start of the race, we were just too tight," Hornish said. "After the first lap, we got some heat in the tires and it got better."

There were plenty of restarts throughout the race. They yellow flag waved seven times in the race that was scheduled for a 90-lap distance. The final caution with two laps remaining, though, sent the race into overtime for a green-white-checker attempt.

Several drivers, including Allmendinger were close on fuel and the extra laps added to the fuel mileage uncertainty. As a result, Allmendinger resorted to shutting off his engine at multiple points each lap during the final caution to ensure he'd have enough fuel to go the distance.

Along with Allmendinger, McDowell, Hornish and Kelly were mainstays up front for most of the race.

With the third-place finish, Hornish reclaimed the championship points lead. The previous leader, Austin Dillon, driver of the No. 3 Richard Childress Racing Chevrolet, also had problems on the final lap and wound up 21st. As a result, Dillon is now third in the standings.

Moving up to second in points is the No. 11 Joe Gibbs Racing Toyota of Elliott Sadler. Sadler finished the race in the sixth position. The No. 33 Richard Childress Racing Chevrolet of Max Papis was fourth.

The No. 20 Joe Gibbs Racing Toyota of Brian Vickers rounded out the top-five. It was Vickers' sixth-straight top-five finish. After the race, he said that he's team would probably have several wins if it weren't for bad luck and flat tires. Vickers had to make an unscheduled stop for a cut tire on lap 49.

Charity begins at home at Mid-Ohio