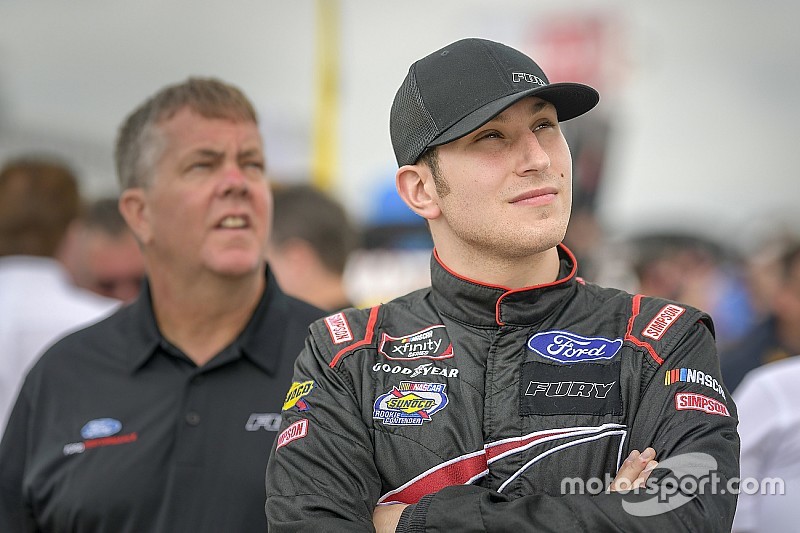 Kaz Grala got a second chance to compete in the NASCAR Xfinity Series and he and his new team are making the most of the new opportunity.

This is the first in series of stories this season chronicling Grala and his Fury Race Cars as they continue to defy the odds with strong finishes and the ability to compete as a new team in the series.

Motorsport.com spent some time with Grala recently ahead of his start this weekend at Watkins Glen (N.Y.) International. This will be the first of three road course races for the series over the next four events.

Grala will compete this weekend in the No. 61 DMB Financial Ford Mustang and while he’s focused on the race this Saturday, he spent some time telling the story of how everything came together this year.

“Last year I ran the Truck Series and would probably give myself a ‘B’ on my performance last year,” Grala said. “I probably could have used another year in the Truck Series, but there were no opportunities and one came open in the NASCAR Xfinity Series so I went where the opportunity was (to race).”

Grala made the step up to the Xfinity Series with JGL Motorsports and the season got off to a decent start for the Boston, Mass., native, finishing fourth in the opener at Daytona.

“I would say the first five races for us at JGL were very solid and we were learning and getting better each week,” Grala said. “Then the next five races saw things really change for our team.”

How it all began

After the 10th race of the season, team owner James Whitener was forced to suspend team operations for health reasons and this left Grala without a ride. This is where the Fury Race Cars story begins.

“My dad is a partner at Fury and we had sponsorship for four races so we decided to approach Tony Eury Jr. and his group and see what we could work out,” said Grala. “In a matter of two weeks, we went from an idea to being in the tech line for inspection before the race at Charlotte (Motor Speedway).”

Grala added that a couple of crew members from JGL came with Grala to Fury, and with the experience level of the crew members and many of them feeling a “we had something to prove” attitude, they went to work and it showed immediately.

Performing right off the bat

Grala and Fury Race Cars finished 10th at Charlotte in their first race together and proved it wasn’t a fluke by finishing 10th at Iowa Speedway three races later, but it was at Daytona where this new partnership showed what they are made of to the NASCAR world.

Grala and Fury Race Cars reached out to all Ford teams asking if anyone had a car they could use for the race since this was the last race to use steel-bodied cars and one team responded with a unique situation.

“Stewart-Haas Racing had a show car in their inventory and said we could use that if we like and we took it,” said Grala. “We only have about eight people that work on the cars at Fury. They went to work and we built the car and somehow came home fifth in the race, and it was one of the very few cars not to have a scratch on it.

“We took the wrap off the car and gave it back to Stewart-Haas and I was so proud of this team and what they did for me to be able to race and come home with a top-five finish.”

As the team moves into the final half of the 2018 season, Grala is optimistic. Although he’s no longer eligible to compete for a title this season, he and the team is focused on competing for wins and helping set things up for him in 2019.

“I’m confident if we can get more sponsorship we can have more success this year, but we are making the best of our situation and are focused on doing everything we can to be ready for any opportunities that might come open in 2019,” said Grala. “We’re really excited about the upcoming road course races.”

“We want to focus on the remainder of the season and setting up for 2019 and our performance on road courses could go a long way in helping us the rest of the year,” said Grala.