Today, it takes more than owning a track in a major market to guarantee a race date

MADISON, ILL. – The days of "if you build it they will come" are over for race track owners in NASCAR.

Even still, it’s hard to believe that it’s been four years since NASCAR raced at Gateway Motorsports Park.

Starting in 1997 and for 14 seasons, Gateway was a regular stop on the Busch Series tour. The following year, the Craftsman Truck Series joined the party at the 1.25-mile track. Elliott Sadler, then 22, posted his third career win in the first race at what was then Gateway International Raceway. In 1998, Rick Carelli, racing’s “High Plains Drifter” won the truck debut.

Over the years, the track and racing tours’ names have changed but the racing remained consistent. Young stars made names for themselves alongside track and series champions who continued to display the talent that earned their titles. 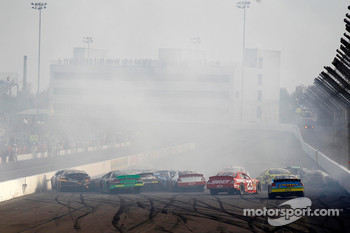 Brendan Gaughan, Peyton Sellers and 10 other cars are in a wreck on the front stretch

Dale Earnhardt Jr. did both winning consecutive races in 1998 and 1999 on the way to his two Busch Series titles against young guns with names such as Matt Kenseth, Tony Stewart and Jimmie Johnson. When the trucks returned West Coast hopefuls Kevin Harvick and Greg Biffle mixed it up with Ron Hornaday Jr. and Jack Sprague.

Hornaday is back in the field for Saturday’s Drivin’ for Linemen 200. The four–time truck champion, who turns 56 next Friday, is still battling for wins and titles among the latest class of NASCAR’s “Next”.

“Driving in here, I haven’t met the new owners yet, but it’s pretty impressive to see the track,” Hornaday said. “I’ve rode my motorcycle up to (North) Wilkesboro after it closed down and all you see is the grass growing up through the track and everything else. It’s a crying shame to see a good race track go.

“I figured you’d come in here and see weeds and dust and stuff, but they’ve done a great job around here. To see the pavement and how they resealed the parking around here, all the walls, It looks like just yesterday we raced here. So my hat’s off to the new owners. Great job!”

The previous Gateway owners learned the hard way that any track is just one power outage – or two -- and a sanctioning agreement away from losing a coveted date on one of NASCAR’s schedule. No competitor – or race fan – ever complained about the quality of the product on the track. Gateway was custom made for green-white-checkered flag finishes. 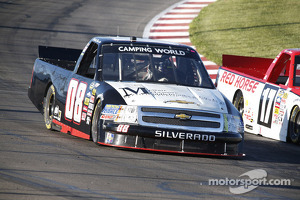 But whether it’s the sweltering summer temperatures or the track’s inability to stock generators in case of an emergency, the fans’ support waned over the years. Hopefully, that will change under the leadership of Curtis Francois, who has invested over $11million to revitalize the facility.

“The enthusiasm for professional motorsports in the St. Louis region is greater than anyone could have ever imagined,” Francois said in a release.

The true test will come on Saturday night when -- and if -- the fans fill the stands.

After the 2003 season, International Speedway Corp. moved one of the two Cup races to Fontana. The following year, Speedway Motorsports purchased the track and moved the second Cup date to Texas Motor Speedway. NASCAR’s core fan base was incensed. How could North Carolina lose yet another race? But where were those same fans that once filled the 60,000 seats at The Rock? At the last race in 2004, only 50,000 spectators were in the stands. 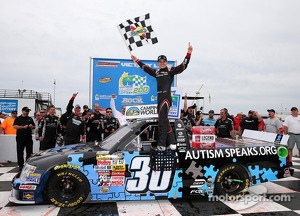 Fast forward to 2012, after the Andy Hillenburg-owned facility finally received a truck date for the one-mile oval. Both fans and competitors alike offered to support The Rock. Kasey Kahne brought star power to the event which he would go on to win. Other competitors, after watching the sporty event which attracted just over 27,000 fans, promised to support the event the next year.

In 2013, Joey Logano was the only Cup regular to come out – but he couldn’t hold off Kyle Larson, who scored his first NASCAR win for the fans fortunate enough to witness history that day. Unfortunately, the fans were few and certainly not enough to cover the sanctioning fees.

Consequently, The Rock is once again a test track. The good news? Gateway Motorsports Park now has a date. The question is will you, the race fans come out and support the track and the competitors on Saturday? Will you, the race fans make the commitment that it takes to let NASCAR know that the Metro-St. Louis area is worthy of being considered for a Camping World Truck Series date again next year and possibly a spot on the Nationwide Series schedule again? 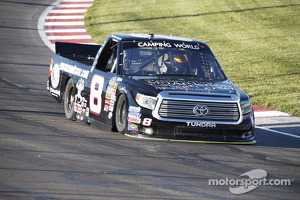 As a St. Louis native, I made the conscious effort to cover Gateway this weekend over the Sprint Cup/Nationwide double header at Michigan. It’s probably the first time I’ve missed a weekend in the Irish Hills in over 20 years. But I felt it was important to embrace my home track.

This region is dotted with short track action, just ask Kenny Wallace or Kenny Schrader who grew up in the area and still race here. Yet, if you’re looking for a USAC/truck double header this Saturday, it will be hard to beat the competition at Gateway.

So what will it take to keep NASCAR racing in the St. Louis area beyond this year?

“A good crowd and 32 drivers finishing the race and everybody having a smile on their face,” says Camping World Truck Series director Chad Little. “This track has always been competitive as you know. It’s produced some of the best racing ever. It has two unique ends. It’s bumpy. It has all the things that makes a driver have to get up on the wheel and race hard. It makes for good racing.” 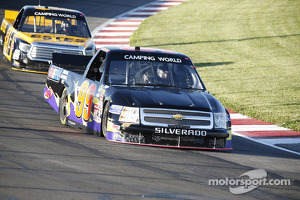 Despite the traditionally brutal summer heat in the region, Hornaday believes the cooler temperatures on Saturday night will build more grip into the track. This week, his phone was burning up with rookies and veterans alike calling him for advice on the best line around the egg-shaped venue.

“There’s two really different corners on both ends of the race track,” Hornaday said. “When you pull across that back straightaway -- and I’m sure some of those rookies look down and say, ‘man, that’s a long straightaway, we’re already half-way down it’.

“You get some pretty big speeds here, a lot of braking and in the old days, a lot of down-shifting but I don’t think we can do that anymore with the gear ratio that NASCAR has come up with. But I’m sure someone will try it and if they do they better be prepared because if they do too early they’ll wheel hop it down in Turn 1 and be back in the fence.” 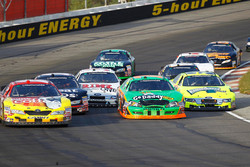 In eight starts, the veteran has led 344 laps but won just one race. Although Hornaday enjoys the track immensely, his results are a testament to the challenge that is Gateway.

“I have fond memories of Gateway,” Hornaday adds. “I’ve had some great races here. I’ve had a lot of memorable races where I didn’t finish well because I got moved out of the way for the win. It just puts on great racing.

“We put on great racing in the truck series. I see they’ve brought in some heavy hitters from NASCAR to see how it goes, to bring the next race in, might be a Nationwide Series race, who knows. Definitely the owners want it. That’s why they’ve put into the track what they have and how it looks. Hopefully, the fans will support the truck series and give back a little of what he’s put into it.”

Ben Kennedy glad Gateway is back on the NASCAR schedule