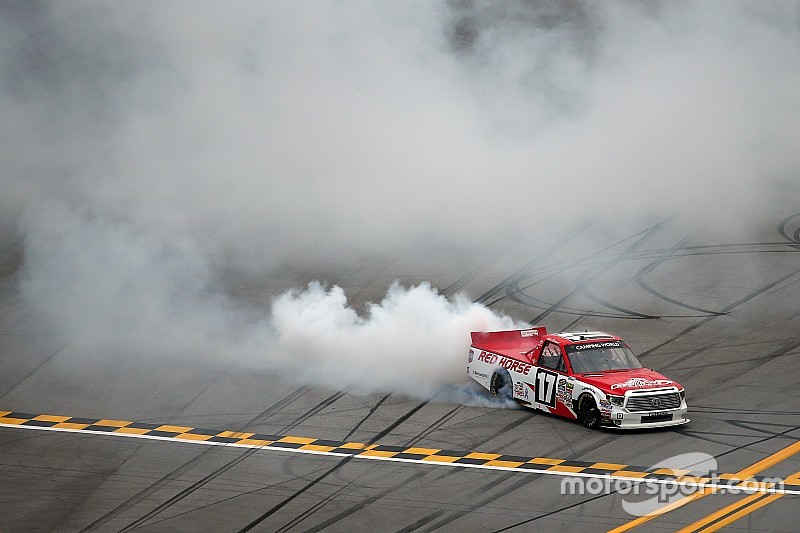 It’s been a long year but Timothy Peters made the most of the anniversary.

Peters ended his year-long win drought in the Camping World Truck Series with a repeat of his victory of a year ago at Talladega (Ala.) Superspeedway.

Peters took the lead on Turn 1 of the start of a two-lap overtime and was declared the winner when John Wes Townley and Spencer Gallagher wrecked to bring out the caution. Earlier in the week NASCAR changed its rules limiting races this weekend at Talladega to one two-lap overtime attempt.

We were on point today. We had a shot to win it so there is nothing to be ashamed of.

“From the time we unloaded, our truck was fast. We knew if all the fenders would stay on it, we’d have a chance,” Peters said. “It’s all about positioning yourself at the end of the race to go for the win.”

Peters said he wasn’t worried on the last restart that GMS Racing teammates Jones and Gallagher would work together hold off his advance.

“I think at that point all bets are off – teammates or not. You go after what you can,” he said. “I didn’t get a good shove in the beginning but (Gallagher) did give me a good shot to help me get out of front.

“I don’t know what happened to him. I saw him slide across (the track) in my mirror.”

Jones took the lead from Brian Keselowski on a restart with four of the scheduled 94 laps remaining. Christopher Bell pushed Jones to the lead but was penalized by NASCAR for “bump drafting.”

NASCAR elected not to penalize Jones as well and he maintained the lead following a 10-truck wreck that sent the race into overtime.

“We were on point today,” Jones said. “We had a shot to win it so there is nothing to be ashamed of.”

With four races remaining, Jones holds an 18-point lead over Reddick in the championship battle. Matt Crafton, who has won the past two series championships, had a bad day and finished 24th. Crafton how trails Jones by 23 points.

“It was just exiting there at the finish. I saw them all wrecking. I saw (Gallagher) lose it and get loose on the backstretch and just hoped nobody was going to tag us and we got out of it,” Jones said.

“It was a great day for us in the points. I never thought we would come out of this race this many points ahead. Everything from the best to the worst can happen here and it turned out OK for us.”