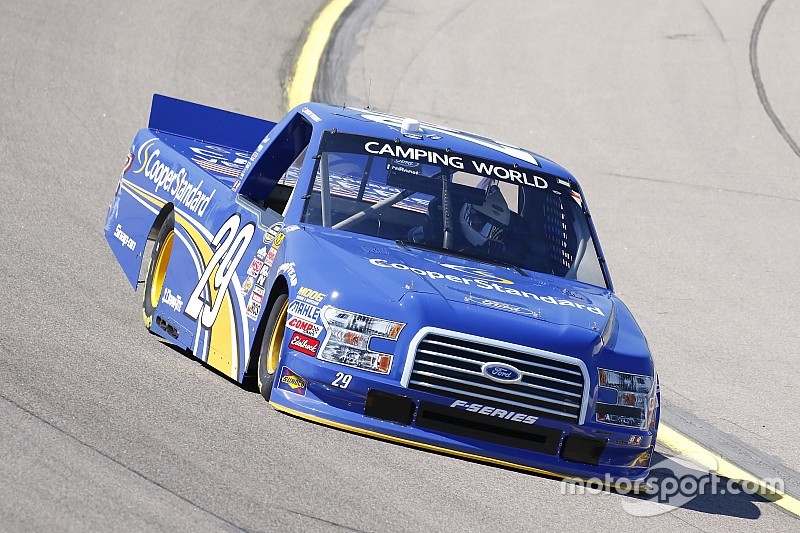 On the eve of his son’s NASCAR debut, Motorsport.com caught up with Penske Racing president Tim Cindric to ask about Austin’s career plans

It was only on Tuesday that 17-year-old Austin Cindric was confirmed as sub for Austin Theriault in the No. 29 Brad Keselowski Racing Ford in the NASCAR Camping World Truck Series round at Martinsville Speedway this weekend.

Theriault was injured in a vicious accident at Las Vegas Motor Speedway earlier this month, and initially his place was taken by Brian Keselowski, team owner Brad’s brother. However, this weekend, after starring in his two ARCA starts (leading laps in both), Cindric takes over the No. 29.

However, the North Carolinian, who won at Mosport on his way to sixth in the Continental Tire SportsCar Challenge driving a Ford Mustang, has yet to commit his racing career in any particular direction. As his father, Penske Racing president Tim Cindric explains, Austin’s priority at the moment is exploring options and becoming evermore versatile.

David Malsher: Is there a long-term aim for Austin?

Tim Cindric: He’s up for whatever opportunity is out there. That’s the way he thinks – he wants to be prepared for anything. He’s told me, “I really don’t care what I drive. As long as it improves my chances of making it as a professional driver.” That’s always been his approach and he doesn’t want to specialize until he has to.

From my perspective, I think Austin being versatile and ready to race anything is something that not many drivers are able to do any more so hopefully it differentiates him from some of the other young drivers. Most important thing is that in any situation he goes for, he needs to have the right team around him; in any other regard, I think open-minded is the best way to describe him.

So I think he’s got one more year of jumping at whatever and wherever the best opportunities are, and then figuring out what he should start concentrating on. But that’s just my opinion.

What do you feel he’s got the biggest kick out of so far?

Honestly, it’s hard to say because he’s just appreciative of driving racecars, driving a variety of racecars, and driving for good solid teams. He spent two days this week at VIR testing Action Express Racing’s Daytona Prototype. And then it’s the Truck here at Martinsville, and then he’s off to Vegas to drive the GRC Lites car on Sunday, and race Tuesday/Wednesday.

He might get to try an LMP2 car before the end of the year, and he’s already had an offer to run the 24 hours of Dubai and the Bathurst 12 Hours. And these are not drives where he’s got to bring funding; these are legitimate deals. So it’s really encouraging for him.

Do you think his Bathurst 12hr performance last time in the Erebus Mercedes-Benz SLS has opened up the world of GT racing for him?

Well, I think what it did was earn the respect of the Australian GT teams, yes – basically anyone who was in attendance. On a global stage, probably not because the result wasn’t there – they had three tires delaminate and there was a red flag while he was qualifying. It’s only if you dig into the laptimes in the race. I think someone told me he had the fifth fastest lap time of the race and he ran with the leader for 20 laps even after his car had been backed into the wall.

I wanted him to go there because I wanted to know how far to push him. I mean, I walked away from the Bathurst 1000 in 2014 saying, “I need to get Austin here to gauge where he’s at, to give me an idea of how far I can take him and what direction I can suggest.” Bathurst is the most difficult track I’d ever been to, and if he could survive there, do well there, then I’d feel that OK, there’s nothing I wouldn’t put him in.

If you’ve never been to Bathurst, let me tell you, that track is awesome. If you take Road America, combine it with Laguna Seca, then increase the elevation change by 50-75 percent, narrow the track surface by 30-40 percent, and then put cement walls all around it – that’s Bathurst! Incredibly demanding. And I’m sitting there watching my 16-year-old running 180mph around there…

Now I know there were many critics thinking aloud about whether he deserved an A-class ride, and by the second session he’s being told that he’s the driver that’s going to be doing the qualifying run for that team, and in the race he did about five-and-a-half hours, because they were double-stinting each time. He turned heads in all the right ways.

And yet Martinsville in these circumstances are just as daunting in their own way. Short oval, 35 other trucks, and it’s his series debut…

Yeah, he’s in way deep, definitely. BK Racing’s team manager, Jeremy Thompson, called me out of the blue in the summer, and told me they’d really like to run Austin before the end of the year. It’s a difficult spot for me, because it’s not like I’m going to ask Brad for my son to get a ride with him. I want Austin to earn whatever opportunities come his way, and to be taken on merit, so for them to ask him was a step forward in the right way.

At the time they didn’t know when Austin Theriault would be back, so they said, “How about Austin [Cindric] drives for us at Martinsville?” I asked whether he could test, they said no, they’re all out of test days. I said how about at least shifting one at Motor Mile, but NASCAR said no to that – I guess because the other BK Racing truck is in the Championship Chase.

But in practice here Austin was only a tenth of a second off his teammate, who’s second in the championship. So I think if he just gets to the end, he’ll have learned so much. I’m pleased for him.

A look at the tentative 2016 NASCAR Truck schedule