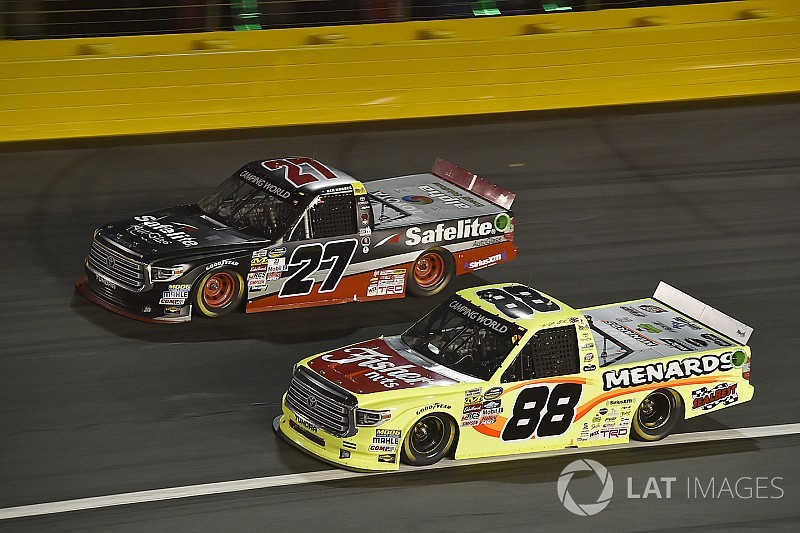 One year after fire destroyed ThorSport Racing’s headquarters in Sandusky, Ohio, the organization is thriving.

Veteran Matt Crafton is third in the Camping World Truck Series standings. Under the direction of new crew chief Eddie Troconis, Ben Rhodes has found the speed and consistency he was lacking in his rookie season and is fifth in points.

Was it a setback? Of course it was. There’s no way that it wasn’t.

Newcomers Grant Enfinger and Cody Coughlin, seventh and 14th in the standings, respectively, have quickly acclimated to the Duke and Rhonda Thorson-owned team.

But in the early morning hours of June 13, 2016, general manager David Pepper wasn’t sure whether the organization could salvage the 100,000 square foot building, let alone pick up the pieces and soldier on to Iowa Speedway the following weekend.

Yet, with the resolve of the ThorSport ranks — and help from the Sandusky community — the company accomplished both tasks and hasn’t looked back since.

“It was pretty bleak the morning of,” Pepper told motorsport.com. “We were watching the back end of the shop on fire knowing we had to get to Iowa in a couple of days. Our Iowa trucks were sitting on the surface plate under water and filled with smoke.

“As the sun came up, we were kind of worried about what we were going to do. But the guys pulled together and salvaged a lot of things from the building. The fire fighters and the first responders had not even secured the area yet and put the fire out and our guys had the transporters over at the Kroger store and we were working out of the parking lot.”

As the smoke cleared, the clean up began. Pepper’s epiphany came later that afternoon, surrounded by his crew and all the salvageable pieces from the shop scattered around the lawn.

“Here’s 30 guys covered in smoke and soot, covered in water from moving stuff out,” Pepper recounts. “We’re all in different ThorSport uniforms, whatever everyone wore in. We were taking a break, having some water, sitting outside on a grassy knoll and one of the guys says, ‘Well, Pep, this is the best team building exercise we’ve ever had. We all worked great together today. All we had to do was burn the shop down.’

“We’re 10 hours into one of the most devastating things that’s ever happened to the race team and all the guys were laughing and thinking, ‘Yeah, we all worked pretty good together.’”

The teams were divided among five different buildings in the area but worked as one unit. Wherever help was needed, someone pitched in — including the Sandusky community. Pepper had Thorson’s assurance that, “whatever he needed, make it happen.”

Working to restore the race shop together

George Sharp, the operations manager for Thorson’s parent company, along with more than 150 workers, joined in the effort to refurnish the six-year-old shop. Seven-and-a-half weeks later, the teams were working in the front end of the building. Pepper describes the transformation as phenomenal.

“I think it made us a better team, a stronger team,” Pepper said. “You just kind of rolled up your sleeves and worked together. We just kind of made it work. We had a couple of second-place finishes during that time where we would’ve liked to have gotten a win, just so we could say we got a win without a building, while working in parking lots and other places, but we persevered. We got better.

“Now the building is back together. We finished the final touches on it around December. And to be honest, it’s probably better than it was before. It allowed us to start with a clean slate and really makes the entire workshop more streamlined.”

Pepper and his management team did what was necessary to make sure everything was as normal as possible from the crew building trucks to the drivers. As the season went on, his message to the teams was not to use the fire as an excuse.

“That makes you fall into a trap,” Pepper said. “And if you use it as an excuse, you give yourself a reason for underachieving. I, personally never want to give myself or anyone else on this team an excuse to underachieve. We have to hold ourselves to a high standard of leading laps and winning races. Regardless of what happens around us, we have to rise above that.

Still searching for first victory of 2017

After seven races, ThorSport is still looking for its first win of 2017. The drivers have qualified well, led laps and posted podium finishes. Rhodes won the pole for this weekend’s race at Gateway Motorsport Park last year and led four laps before finishing second. Crafton has one top-five and seven top 10s at the 1.250-mile track. Enfinger and Coughlin will make their GMP debuts this weekend.

With a little good luck, Pepper believe the victories will come.

“We’ve had a solid start,” Pepper said of the teams’ recent performance. “We feel like we should have won a handful of these races already but circumstances didn’t play out in our favor. When we came off of Turn 2 at Daytona, we had the opportunity to put all four trucks in the top five — which few people have ever had the opportunity to do. Then we had that big crash.

“Still, I think we’ve shown we have speed. We have a great driver lineup and our teams are running on all cylinders. Matt finished second at Atlanta and had a chance to win. Grant’s come in here and scored back-to-back third-place finishes.

“And Ben just keeps getting better and better. He’s developing into a really strong race car driver. If not for a bolt going through the nose of his truck at Kansas, he would’ve won. I really believe we can put several of trucks in the playoffs and have a good shot at winning the championship.”