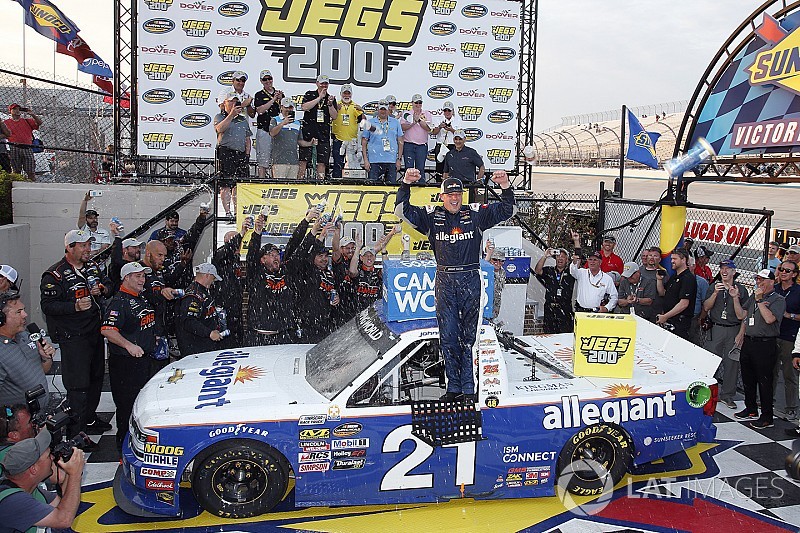 "Well you just never give up," he said in Victory Lane.

"We had to work for this one today. I had a good run on him (Noah Gragson) there and he ran me up. I was like okay, you just gave me the green light to be aggressive, but that was just racing right there."

Sauter controlled the field for the start of the final stage, but found a challenge when Little cut underneath him and moved into command with 79 laps to go. Sauter responded and re-claimed the lead three laps later.

With 45 laps to go, the yellow lights were turned on again as Friesen pounded the wall with a cut tire. Little's strong showing was severely hindered after NASCAR penalized him for pitting outside the box, holding him for a lap.

Sauter held serve at the front, but nearly saw his race go awry when two slower trucks collided in front of him and caused yet another yellow.

The battle for the win heated up with 12 laps to go as Gragson found his way around Sauter, but the veteran was not done yet. He fought back as the laps clicked away and even got into the wall as the two pushed each other to the very limit.

Ultimately, it ended in calamity as Gragson bounced off Sauter's door and crashed hard just before the white flag. He finished 20th.

"Yeah just extremely disappointed in myself," he said after the race, explaining that he was trying to side-draft Sauter when contact was made.

"Not the way I try to race people. Unacceptable on my part."

The race went into overtime with Sauter forced to endure a two-lap shootout, which he did with ease despite a brief charge by Matt Crafton on the restart.

Gragson led the field to the green flag pole position, but the race wasn't green for long as two trucks collided at the end of Lap 1. It was Stewart Friesen and Brett Moffitt who collided, igniting the first caution period of the race.

Green-flag running returned on Lap 7, but was again interrupted when Myatt Snider got into Austin Hill on Lap 15.

Parker Kligerman took the lead for the start of the second stage with a no-tire call, but Sauter quickly found his way around him. But Kligerman held strong in the runner-up position for the majority of the stage until just four laps to go when he was black-flagged for smoke coming from his truck. After pulling into the pits, the team ascertained that their day was done, discovering a crack in the oil cooler.