Sauter out in front of last-lap wreck for Talladega win 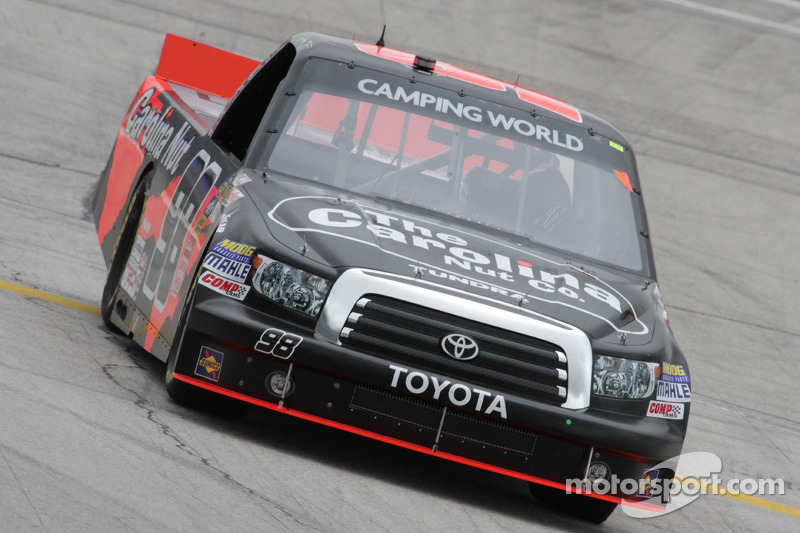 Johnny Sauter was the lucky one in a wild Talladega finish for the NASCAR Camping World Truck race tonight in Alabama.

With several other front runners wrecking behind him, the No. 98 ThorSport Racing Toyota of Johnny Sauter raced toward the checkered flag in the Fred's 250 NASCAR Camping World Truck Series race at Talladega (Ala.) Superspeedway on Saturday.

"This is awesome," Sauter said of the win. "So proud of everybody at ThorSport."

The No. 81 SS Green Light Racing Toyota of David Starr finished second, while the No. 19 Brad Keselowski Racing Ford of Ross Chastain took third. Parker Kligerman finished fourth in the No. 20 BRG Motorsports Toyota and Dakoda Armstrong was fifth in the No. 60 Turn One Racing Chevrolet.

Six trucks in three two-truck tandems ran three-wide on the final lap for the win, with ThorSport teammates Sauter and the No. 88 Toyota Matt Crafton together, Chastain and Kligerman hooked up, and the No. 51 Kyle Busch Motorsports Toyota driven by the team owner himself and Armstrong running together.

"Everybody's getting more brave," Sauter said of drivers' willingness to race in the two-truck tandems.

But a well-intended push from the No. 32 Turner Scott Motorsports Chevrolet of Miguel Paludo for his TSM teammate Jeb Burton in the No. 4 Chevrolet turned Burton sideways and led to a big wreck that also collected Busch, Crafton and the No. 54 Kyle Busch Motorsports Toyota of Darrell Wallace Jr., among others. Paludo, himself, wound up upside down and on fire.

"I don't know what happened," Busch said. "Someone came up underneath me, hit me and turned me left."

While the No. 3 Richard Childress Racing Chevrolet of Ty Dillon and the No. 31 Turner Scott Motorsports Chevrolet of James Buescher worked together to run up front for much of the early laps of the race, the ThorSport duo of Crafton and Sauter bided their time in the back after qualifying poorly, hoping to miss the big wreck.

Sauter and Crafton began a march toward the front, though, following a caution that came out with 39 laps to go. They were in the top two positions for the first time with about 17 laps to go.

"We (Crafton and Sauter) had very, very slow trucks by ourselves, but when we locked up -- game on," Crafton said.

Timmy Hill finished sixth in the No. 1 Rick Ware Racing Chevrolet, while John Wes Townley was seventh in the No. 7 Red Horse Racing Toyota. Max Gresham was eighth in the No. 8 Sharp-Gallaher Racing Chevrolet. Despite getting caught up in the last-lap "big one" Crafton and Busch managed top-10 finishes, taking ninth and 10th.

With his top-10 finish, Crafton was able to build on his championship points lead. Buescher, who was second in points heading into the race, was credited with a 26th-place finish after getting caught up in an incident that also included the No. 18 Kyle Busch Motorsports Toyota of Joey Coulter, the No. 9 NTS Motorsports Chevrolet of Ron Hornaday and the No. 6 Sharp-Gallaher Racing Chevrolet of Justin Lofton with 14 laps to go.

"We got in the middle of (turns) one and two and Hornaday kept squeezing down on me," Buescher said. "We hit a lot of stuff."

Several of the drivers involved in the crash were checked at the Infield Medical at Center and released. However Justin Lofton has been transported to a local hospital for further evaluation.

Can Sauter get hotter?