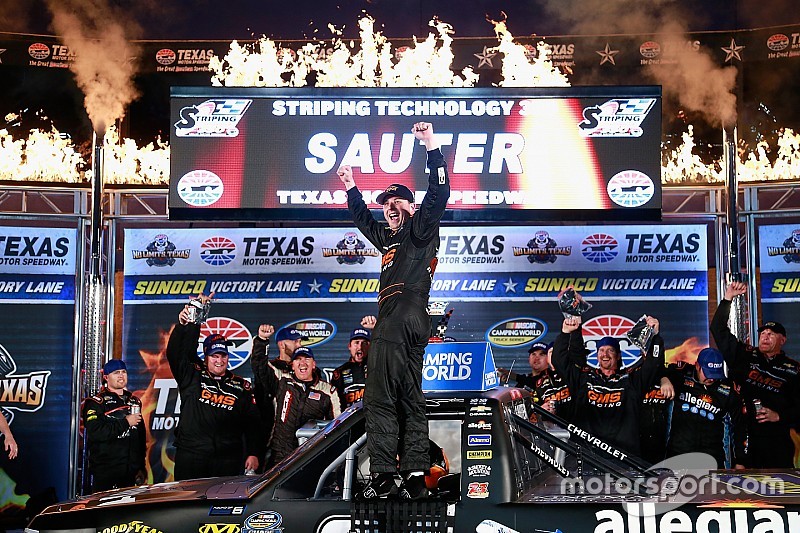 Although Sauter had already locked in his spot in the Champion’s Round last weekend at Martinsville Speedway, his victory six days later in the Striping Technology 350 further solidified the point leader as the favorite entering the season finale at Homestead-Miami Speedway in two weeks.

Sauter picked up his third win of the season and his third win at Texas Motor Speedway after passing Matt Crafton with two laps remaining in the race. Sauter extended his advantage over Crafton by 0.836-seconds at the line.

“Man, what a truck,” Sauter said in Victory Lane. “I apologize to the fans on the burnout. We have to save this truck for Homestead.”

Crafton barely edged out Daniel Hemric for second with Tyler Reddick finishing fourth and Daniel Suarez rounding out the top-five.

Sauter started the race 16th and picked up 10 positions in the first 15 laps. Sauter’s GMS teammate and polesitter Spencer Gallagher led the first 40 laps before the first competition clock expired. Daniel Hemric — the best of the Ford contingent — took the lead in the pits and held on until Gallagher regained the lead on Lap 76.

Seven laps later, the second caution was called when the caution clock expired again. Although Hemric’s crew provided him with the point in the pits, it was short-lived. Gallagher spun his tires and Hemric passed him on the Lap 86 restart. Gallagher regained his composure — and the lead on before Lap 87. As he led the next 40 laps, Sauter, who restarted fifth, passed Hemric on Lap 105 for third and moved by Christopher Bell three laps later.

A record third caution clock expired on Lap 124. While Sauter’s crew executed a flawless stop to gain the lead for the first time on Lap 127, Gallagher’s team spent 17.2-seconds in the box when issues developed changing the right rear tire.

Sauter took the top lane with Crafton on the bottom when the race returned to green on Lap 130 with Hemric, Reddick and William Byron in tow. Crafton passed Sauter on the restart and held the point for 15 laps.

Hemric passed Sauter for second, but the No. 21 Chevy kept digging to regain the spot. With two laps remaining, Sauter motored pass Crafton at the start-finish line to earn the third consecutive win for GMS.

“We’re peaking at the right time but we need to peak in a couple of weeks when we get to Homestead,” said Sauter, who has a 20-point lead over Byron.

“This is amazing, I can’t thank the Gallagher family enough for this opportunity. Awesome pit stops, the whole deal.”

Chasers Christopher Bell, Ben Kennedy and Timothy Peters finished 11th, 13th and 14th, respectively. Bell was a running among the top five most of the night but dropped to 10th on the final restart. He began overheating in the closing laps after contact with Hayley. Bell is third in the standings and trails Sauter by 21 points.

Peters was ninth prior to the first caution, but a speeding penalty knocked the No. 17 truck to 17th for the Lap 44 restart. Running mid-pack, Peters was never able to recover. He’s fifth in the standings and one point behind fourth-place Crafton.

Kennedy started 14th, but had a power issue. The team lifted the hood during the second caution and the No. 33 team’s problems were compounded by a penalty for too many men over the wall. Kennedy restarted 18th on Lap 44 and picked up five spots before the finish. Kennedy remained in the Chase cellar.