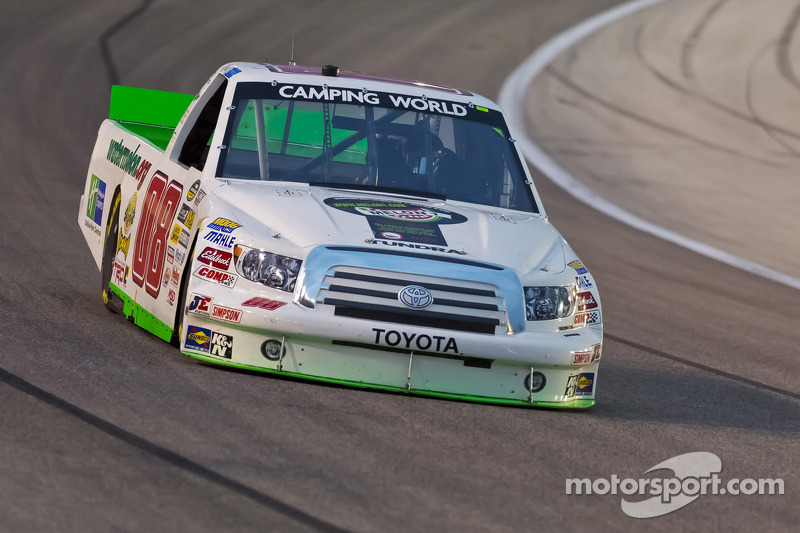 Brooklyn MI – August 18, 2012. The first twelve races of the 2012 NASCAR Camping World Truck Series season have been a learning experience for rookie Ross Chastain. There are many ups and downs for young drivers and it’s all part of the learning curve that a rookie goes through competing in one of NASCAR’s top touring series. 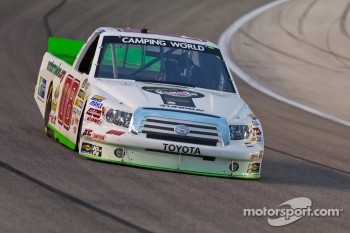 On Saturday afternoon, Ross and the SS Green Light team ran the entire gamut of emotions while having a very solid run in the Melon 1 / Engine Parts Plus Toyota running inside the top-fifteen for nearly the entire NCWTS VFW 200 at the Michigan International Speedway.

Through different pit strategies during the middle stages of the 100-lap event the rookie driver found himself running in the top-five with less than five laps remaining before having to pit for a splash of fuel and dropped all the way to eighteenth at the checkers behind first-time winner Nelson Piquet Jr.

Chastain was featured on SPEED-TV’s “NCWTS Setup” show as former Daytona 500 winner and NCWTS announcer Michael Waltrip joined Ross at one of Melon 1’s watermelon farms in Delaware to explain the process of growing and distributing watermelon throughout the United States.

Ross qualified for the VFW 200 in twenty-first with a lap of 40.27 seconds at over 178.75 mph on the freshly re-paved two-mile speedway in the Irish Hills of Michigan. The Melon 1 / Engine Parts Plus Toyota would not stay back in the field for long as Ross moved up five spots in the first ten laps and then into the top-fifteen where he would stay for the entire race before pitting with less than five laps to go.

“We had a very good handling truck,” Chastain said. “We didn’t have the overall speed to run with the front trucks. I really don’t understand everything yet with all the aerodynamics on these trucks; between the amount of downforce and drag we just didn’t have the outright speed some of the other trucks had, but we were pretty good around other trucks.”

“We weren’t quite fast enough to lead a pack, but when I got behind a couple trucks and helped push we could run faster lap times. I could really eat them up in the corners and that was a bit frustrating.”

“We kind of pit on accident on that last caution. They told me to come if the other trucks came, one or two in front of me came to the pits and I followed them and then no one came behind me. We could have restated about eighth or ninth. But once we were going on the long green I thought it as a good thing we came in,” Chastain explained. “Several of the other trucks made it to the end, but they tell me we wouldn’t have made it. I guess it’s the program we are on with the combination of aero and motor. It’s just one of those things. If there was a late caution we might have been right in a perfect spot to make it to the end.”

“At three or four races earlier this year we would have been happy with an eighteenth place finish,” Ross concluded. “Realistically we were a tenth to thirteenth place truck and if things had worked out a little differently with the stops we could have lucked our way to a top-five. We were running ahead of Dakota (Armstrong) when we came into the pit and we were right behind Jason White so we could have been right there in third or forth.”

“We learned a lot, but in the end we just needed a little more gas in the tank!”

Chastain picked-up one position to sixteenth in the NCWTS point standings as the SS Green Light Racing Team quickly prepares for Wednesday night’s UNOH 200 at the Bristol Motor Speedway.