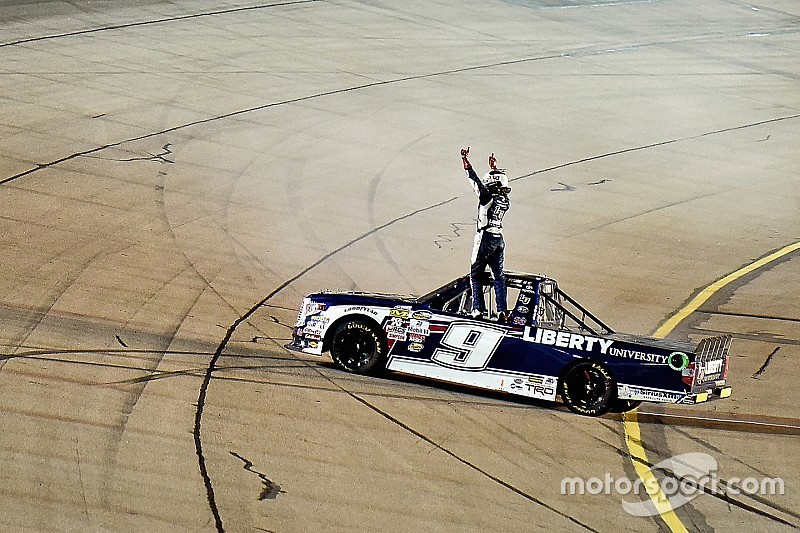 For a rookie, William Byron is looking more and more like a pro.

Byron, who just graduated from high school, went three-wide to take the lead with nine of 200 laps remaining and held on to win Saturday night’s Speediatrics 200 NASCAR Truck Series race at Iowa Speedway.

The win is the third this season for Byron and his second consecutive. He also won last weekend at Texas Motor Speedway.

“My gosh. It’s awesome just to be a part of Kyle Busch Motorsports and to have the group of guys I do,” Byron, 18, said from Victory Lane. “It’s amazing. I’m so fortunate to be in this position.

“We had a couple setbacks there. I stalled it on pit road and I had a few setbacks on some restarts, but we kept after it until that last restart. It’s awesome.”

Byron seemed to have command of the race until a caution was displayed on Lap 148 when Kaz Grala wrecked in an incident that also caught up Rico Abreu and Timothy Peters.

During pit stops, Byron stalled exiting pit road after completing a four-tire stop. With five teams taking only two tires, Byron – who stopped for four – ended up restarting the race in 10th.

Reddick was first off pit road with two new tires and led the way on the restart with Lap 156, followed by Ben Kennedy, Custer, Brandon Jones and John Wes Townley. Hayley restarted sixth – the first truck with four new tires.

With 24 to go, Tommy Jo Martins and Derek Scott Jr. wrecked in Turn 2, bunching up the field. The race was red-flagged for nearly six minutes in order to clean fluid from the track. On the restart on Lap 187, Reddick and Kennedy led the way on the front row.

Custer went from fourth to the lead in one lap but with nine laps remaining, Byron retook the lead after a three-way battle with Custer and Rhodes.

“For the first 10 laps or so, the others were probably better than us on four tires. After that it kind of equaled out,” said Custer, who led a race for the first time this season (three laps). “I thought I had them there when I took the lead.

“I can’t thank Marcus (Richmond, crew chief) and everyone enough. They worked their tails off all weekend. I really appreciate that. I think we’re going in the right direction.”

Caleb Holman wrecked on Lap 193 to bunch the field one final time. On the restart with two laps remaining, Byron led the way followed by Custer, Rhodes, Hayley and Reddick. He wasn’t seriously challenged again to the checkered flag.

Hayley’s third-place finish was a big boost for ThorSport Racing, which saw its shop in Sandusky, Ohio, suffer extensive damage earlier this week in a major fire.

“It was a tough weekend to say the least. I was there at 5:30 a.m. Monday and we spent upwards of 36 hours, both and me and the team, cleaning trucks and trying to get things ready for this race,” Hayley said. “To come out of here with a third-place finish, isn’t just good for me, it’s a statement for this whole organization.”

ThorSport had three drivers in the Top 10, with Rhodes fourth and series points leader Matt Crafton finishing eighth. Rico Abreu was involved in an on-track incident and finished 18th.

After the race, Daniel Suarez confronted Hayley at his truck, apparently upset over how Hayley had raced him on one of the late-race restarts. Hayley’s crew and a NASCAR official separated the drivers without incident.

“I spun my tires on the second-to-last-restart. I went down low to protect my position and I guess he didn’t really like that,” Hayley said. “He was a 10th-place truck all day. We ran third all day. I think it was my time to shine. I did what I needed to do to finish up front.”

After finishing 12th, John Hunter Nemechek failed post-race inspection with his No. 8 NEMCO Chevrolet found to be too low in the right rear. Any penalties will be announced next week.

Five things to watch in NASCAR Truck race at Iowa