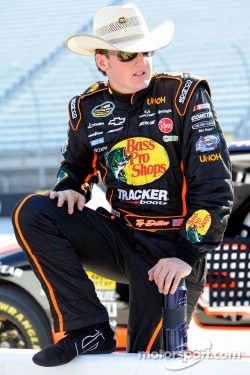 Starting from the pole position, Ty Dillon and the No. 3 Bass Pro Shops/NRA Museum team earned their first-career NASCAR Camping World Truck Series under the lights at Atlanta Motor Speedway on Friday night. Starting from the pole position for the second time this season, Dillon settled into the second position after the green flag waved for the first 10 laps before regaining the top spot. The Welcome, N.C., native reported a tight-handling condition early in the race and a lap-30 caution period provided an opportunity for the No. 3 Bass Pro Shops/NRA Museum team to make adjustments, changing four tires and adding fuel. The quick pit stop placed Dillon back in the point position for the restart. The handling issues on the No. 3 Chevrolet improved throughout the course of the next green-flag run and Dillon remained a fixture in the top five for the next 40 circuits around the 1.54-mile track. As the long green-flag run continued, Richmond instructed the young driver to return to pit road on lap 80 for a scheduled service. Shortly after the pit stop, the Richard Childress Racing team discovered not all of the fuel made it into the No. 3 Chevrolet, and the team would not have enough fuel to make it to the checkered flag. A lap-104 caution provided good luck to the team with Dillon scored in the third position. A fast stop for four tires and fuel by the Bass Pro Shops/NRA Museum team allotted the 20-year-old driver with the top spot for the lap-109 restart. Battling three-wide for the lead, Dillon slipped to the third position, but continued to click off fast laps times and took over the second position by lap 114. With six laps remaining in the event, Dillon drove past the leader and pulled away to bring home his first Camping World Truck Series victory.

TY DILLON QUOTES: "Wow, this is great. The No. 3 Bass Pro Shops/NRA Museum team has given me great trucks all season long. We battled back after the heartbreak last weekend at Bristol (Motor Speedway) when we ran out of fuel, and we came back this weekend and got our first NASCAR victory. I've been waiting for this moment all of my life. I always dreamed about winning a NASCAR race and maybe one day becoming a champion and today, I accomplished one of those goals."

"I really have to thank the Lord for tonight. We had a couple of situations go our way that definitely helped us get to victory lane. The pit crew was amazing. They never give up on me, and I never give up on them. We all believe in each other, and I wasn't going to let this opportunity slip by us. We had a rocket ship tonight. This win is for all the guys that put in all the hours every week and work so hard to get us to this point."

MARCUS RICHMOND QUOTE: "I really have to thank Ty, Richard and Mike (Dillon) for giving me this great opportunity. It's such a great feeling. This team has worked so hard this season and after last weekend, this win pulled us all closer together."

Tim George Jr. earned a 28th-place finish in Friday night's NASCAR Camping World Truck Series race at Atlanta Motor Speedway after damage from an on-track incident incurred to the No. 2 Applebee's/Potomac Family Dining Group Chevrolet and forced the team to retire from the race early. George made up an all-RCR front row, leading the 36-truck field to the green flag from the second position alongside polesitter and teammate Ty Dillon. Shortly after the start of the race, the New York native dropped to 12th in the running order, noting that his Chevrolet had developed a tight-handling condition in the center of the corners. Crew chief Gere Kennon directed George down pit road for routine service under caution on lap 32, and the No. 2 Chevrolet team was scored in the 10th position for a lap-35 restart. Shortly after green-flag racing resumed, George was involved in a three-truck incident exiting turn four, causing significant left-side and rear damage to the Applebee's/Potomac Family Dining Group machine. Although George pitted numerous times for repairs, the No. 2 Chevrolet was unable to continue at a safe and competitive pace and retired from the race with 63 of 130 laps complete, recording a 28th-place finish.

TIM GEORGE JR QUOTE: "It's really unfortunate for the Applebee's/Potomac Family Dining Group Chevrolet team that we were in that on-track incident. I really believed that we were capable of a top-10 finish at Atlanta Motor Speedway. Congratulations to my teammate Ty Dillon on earning his career first NASCAR win."

Joey Coulter and the No. 22 Armour Vienna Sausages Chevrolet team finished seventh in Friday evening's NASCAR Camping World Truck Series race at Atlanta Motor Speedway after battling a loose-handling condition throughout the 130-lap event. The 22-year-old driver qualified the Richard Childress Racing entry in the 14th position, and radioed that his Silverado was extremely loose early in the race, but was able to hold a top-20 position during the first 30 laps. When the first caution flag was displayed on lap 31, crew chief Harold Holly brought the Miami Springs, Fla., native to pit road for four tires, fuel and a chassis adjustment. Quick work by the RCR crew provided Coulter with valuable track position as the No. 22 Chevrolet restarted in the 11th position and he worked his way into the top-10 soon after. The 2011 NASCAR Camping World Truck Series Rookie of the Year remained quiet on the radio during the late stages of the event as he battled the handling on his Chevrolet, swapping between tight and loose-handling conditions. Coulter continued to fight and utilized the final restart to improve his track position, ultimately crossing the finish line in the seventh position. The top-10 finish advanced Coulter one, spot to sixth, in the Camping World Truck Series driver championship point standings, 44 points behind the leader.

JOEY COULTER QUOTE: "Overall, it was a solid points night for the No. 22 Armour Vienna Sausages Chevrolet team. This wasn't the finish we had hoped for, but I can't complain about posting another top-10 finish. We have a couple of weeks until Iowa (Speedway); our team will regroup and be ready to compete for the win."

Chastain slides to top-twenty at Atlanta