Joey Coulter and the No. 22 Rip It Energy Fuel team brought home a third-place finish during the NASCAR Camping World Truck Series season finale at Homestead-Miami Speedway after battling handling issues and surviving a green-white-checkered finish Friday night. The 22-year-old driver started the scheduled 134-lap affair from the 11th position and battled a tight-handling Chevrolet Silverado during the early laps, as he maintained a position within the top 15. On lap 37, under yellow-flag conditions, crew chief Harold Holly called Coulter to pit road for four tires, fuel and a chassis adjustment to help combat the handling issues the green and black machine had developed. The speedy pit stop placed the Miami-Springs, Fla., native in the ninth position for the ensuing restart. Back on track, Coulter remained in the top 10 of the running order before coming to pit road under caution for right-side tires, fuel and another round of chassis adjustments on lap 105. Varying pit strategy allowed the Richard Childress Racing driver to restart from the third position on lap 108, and he remained in the top 10 until the caution flag was displayed with one lap to go. Coulter was scored in the fourth position for the green-white-checkered finish and battled for track position during the final laps, taking the checkered flag in the third spot. Following his 13th top-5 finish, Coulter rounded out the season third in the NASCAR Camping World Truck Series driver championship point standings. 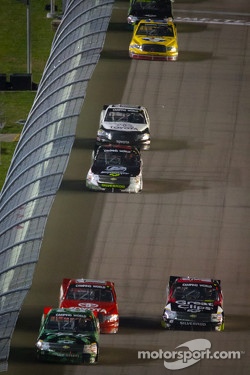 JOEY COULTER QUOTE: "A third-place finish is a great way to end the season. At first I didn't think the Rip It Energy Fuel crew was going to be able to pull off that strong of a result, we really struggled during the first part of the race. But thanks to the call Harold (Holly, crew chief) made at the end for right-side tires only, we gained a lot of track position and were able to hold on at the end. I also have to thank my guys for such an awesome season, finishing third in the (NASCAR Camping World Truck Series championship) point standings shows how solid this team was all season."

Tim George Jr. and the No. 2 Applebee's/Potomac Family Dining Group Chevrolet team finished 18th after a last-lap spin in the NASCAR Camping World Truck Series season-finale race at Homestead-Miami Speedway. Starting from the 30th position, the Richard Childress Racing driver climbed into the top 25 by lap 30 while wrestling with a loose-handling Chevrolet. After the first four-tire pit stop of the night under caution on lap 38, George restarted 20th and maintained a top-25 running position for the first part of the 140-lap event. A caution-flag period on lap 105 gave George the opportunity to take a "wave around" pass, putting the Applebee's driver only one lap down to the leader. George found himself hovering in and around the top 20 for the remainder of the race while narrowly escaping a multi-truck accident that involved his RCR teammate, Ty Dillon with one lap to go in the event. Restarting in the 18th position for the green-white-checkered finish, George kept his truck out of trouble until he was caught up in a spin on the last lap of the event coming out of the turn four. George was able to cross the finish line in the 18th position and the No. 2 Chevrolet team finished 14th in 2012 Camping World Truck Series owner championship point standings.

TIM GEORGE JR. QUOTE: "This was not the way I wanted to end the season. First of all, I have to thank Gere (Kennon, crew chief) and the rest of my guys for giving me a really fast truck. We were fast right off the hauler. I like Homestead-Miami Speedway. I was loose during qualifying and nearly lost it in turn four which gave us a bad starting position. That pretty much sealed our fate with a short race. Every position was a fight. I did get a good restart for the green-white-checkered finish and then lost the air and spun out on the final turn. I've learned a lot about racing the trucks this year and I'm looking forward to next year."

Strapping in for one final race of the 2012 season, Ty Dillon was named the 2012 Sunoco Rookie of the Year honors despite being involved in a late-race incident and finishing in the 25th position. Dillon and the No. 3 Bass Pro Shops team earned a third-place starting position for the season-finale race at Homestead-Miami Speedway on Friday night. Moments after the initial green flag was displayed to the field, the 20-year-old driver reported a tight-handling condition on his Chevrolet Silverado. Crew chief Marcus Richmond called for four tire pit stops on three different occasions that included fuel and chassis adjustments to alleviate the handling issues Dillon was experiencing. With the NASCAR Camping World Truck Series championship trophy within the team's reach, Dillon made his way through the field and was scored in the sixth position with 10 laps remaining. As the Richard Childress Racing driver was battling for the second position contact was made with another competitor, sending Dillon into the outside retaining wall and severely damaging the black and orange machine relegating the No. 3 Bass Pro Shops team to a 25th-place result.

TY DILLON QUOTE: "It just wasn't our year. I can't explain how proud I am of this No. 3 Bass Pro Shops team. We've had an amazing rookie season. I want to thank Bass Pro Shops and University of Northwestern Ohio for all their support. We couldn't have done it without them. We'll come back next year and work twice as hard."

Kyle Busch gets nudged at the finish line in Homestead 200