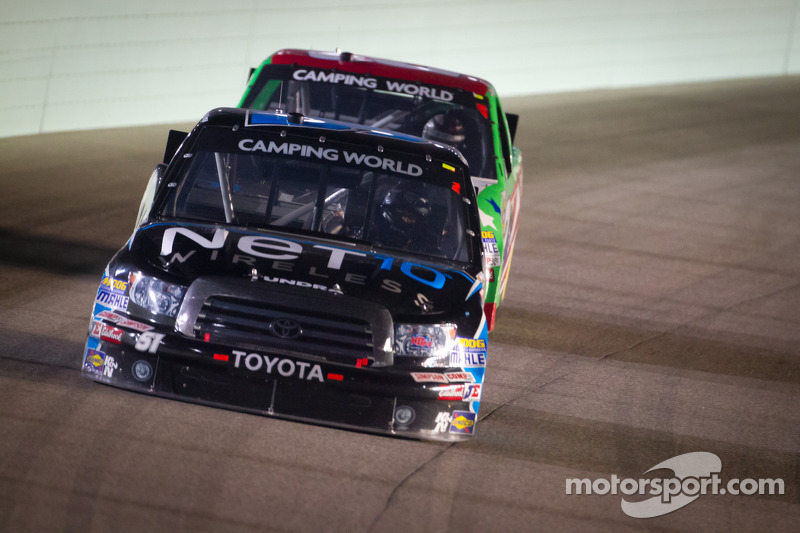 After going two laps down to the leader and running outside the top 20 with 50 laps remaining in Friday's Truck Series finale at Homestead-Miami (Fla.) Speedway, Germán Quiroga and the NET10 Wireless® Racing team orchestrated a rally in the closing stages of the race. After taking a wave around when a debris caution occurred on lap 105, Quiroga was scored in the 19th position, one lap down. Over the final 35 laps, the three-time NASCAR Mexico Series champion made his way past three more competitors to earn his second career Truck Series top-15 finish. 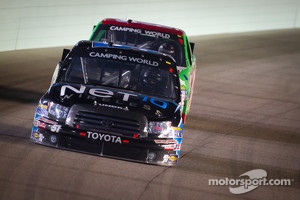 "I was really hoping to earn another top-10 finish -- I think the NET10 Wireless Tundra was capable o f that, we just got too far behind early in the race," said Quiroga, who was making his sixth career NASCAR Camping World Truck Series start. "I am thankful to NET10 for trusting in me for these four races and to everyone at Kyle Busch Motorsports (KBM) for helping me get up to speed in the trucks. I'm hopeful that I will be running in the Truck Series again next year -- it has been a great experience."

Quiroga started from the 28th position, but moved into the top-25 early in the race. As he battled a loose-handling NET10 Wireless Tundra, he surrendered a lap to leader Nelson Piquet Jr. on lap 30. When the first caution of the race occurred on lap 37, he brought his Toyota down pit road where the KBM over-the-wall crew administered a four-tire and fuel stop and returned him to the track scored one lap down in the 20th position.

The Mexico City native ran just outside the top 20 for the next 50 laps as he continued to show improved lap times. During a long green-flag run between lap 50 and 105, Quiroga communicated to veteran crew chief Rick Ren that his Toyota was becoming increasingly tighter as the run progressed.

Race leader Kyle Larson made his way around the NET10 Wireless Tundra on lap 85, putting Quiroga two laps down with just under 50 laps remaining. Shortly after, Ren summoned his driver down pit road for a regularly scheduled green-flag stop, giving the No. 51 Toyota four fresh tires - with an air pressure adjustment - and a full tank of fuel.

Quiroga was scored in the 20th position when a debris caution slowed the field for the third time on lap 104. After all of the lead-lap trucks pitted, Ren kept his driver on the track to take advantage of the 'wave-around rule'. When the race restarted on lap 109, the 32-year-old was scored one lap down in the 19th position.

Quiroga lined up in the 16th position, the second truck one lap down for the final restart. Veteran spotter Rocky Ryan encouraged Quiroga prior to the field going back green, "Get up on the wheel and give me everything you got." Over the final two laps, the Truck Series newcomer was able to work his way around series stalwart David Starr and earned a hard-fought 15th-place finish.

Cale Gale became the 16th different winner in the Truck Series this season, which is a new record. Busch finished 0.014 seconds behind him in the runner-up position. Future KBM driver Joey Coulter finished third for the second consecutive week, while Piquet Jr. and Miguel Paludo rounded out the top-five finishers.

Quiroga finished his four-race schedule behind the wheel of the No. 51 NET10 Wireless Tundra with two top-15 finishes, including a career-best eighth-place finish at Talladega (Ala.) Superspeedway in October.

Undesired results for Hornaday in finale at Homestead