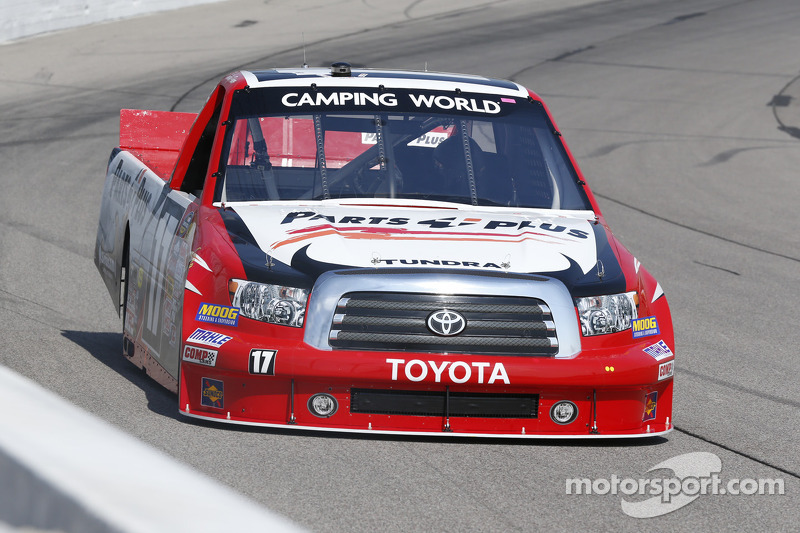 Timothy Peters was in the perfect position to snatch the victory out of the hands of Ron Hornaday in the NASCAR Camping World race at Las Vegas Motor Speedway.

Timothy Peters and his No. 17 Red Horse Racing Toyota may have already had two wins on the season heading into Saturday's Sam's 350 NASCAR Camping World Truck Series race at Las Vegas Motor Speedway, and Peter was a six-time winner in truck competition, but Peters and company didn't have a win on a mile-and-a-half to show for that efforts. That all changed on Saturday, as Peters drove the No. 17 by the No. 9 NTS Motorsports Chevrolet of Ron Hornaday and into the lead on a restart with two laps remaining.

"We were good as soon as we came off the hauler," Peters said of his truck.

The No. 98 ThorSport Racing Toyota of Johnny Sauter also got by Hornaday on the final restart to finish second. Hornaday wound up dropping by to sixth in the final laps.

"It was a pretty crazy restart," Sauter said. "We were really good on restarts all night."

After spinning and bringing out the first caution on lap 13, the No. 32 Turner Scott Motorsports Chevrolet of Miguel Paludo finished third. The No. 3 Richard Childress Racing Chevrolet of Ty Dillon was fourth, and the No. 54 Kyle Busch Motorsports Toyota of Darrell Wallace Jr. rounded out the top-five.

The 146-lap race was caution-filled, with the yellow flag waving nine times. The last of those nine cautions came out with nine laps to go and led to a two-truck battle between Peters and Sauter for the race win.

With the high number of cautions, there were several opportunities for varying pit strategies. Those varying strategies led to drivers including the No. 62 Richard Childress Racing Chevrolet of Brendan Gaughan, the No. 19 Brad Keselowski Racing Ford of Ross Chastain, and the No. 6 Eddie Sharp Racing Chevrolet of Justin Lofton, among others, spending time up front.

Series championship points leader Matt Crafton, driver of the No. 88 ThorSport Racing Toyota, looked to be on his way to his first win of the season after taking the lead from Wallace with 42 laps remaining. But Crafton began dropping back through the field after losing the lead to Hornaday with 26 laps to go.

"I don't know," Crafton said. "I just all of a sudden went dead loose. It was tight on that green-white-checker."

Crafton was one of only a handful of drivers to pit during the last caution, thinking that there may have been an issue with the tires. All four tires taken off the truck looked fine, though, Crafton said after the race. He wound up finishing 11th for his first finish of the year outside the top-10, 17 races into the season. Despite his first finish outside the top-10, Crafton's margin atop the standings didn't shrink. Second-place in points, James Buescher, finished ninth in the No. 31 Turner Scott Motorsports Chevrolet. Crafton's lead margin was 41 points to start the race and was still at 41 at the end of the event.

After Crafton drifted back, Peters moved into second to battle Hornaday for the lead. They raced side-by-side for the top spot with 11 laps to go, but Hornaday was able to maintain his position. Hornaday held the lead until the final caution before losing the spot to Peters and then proceeding to lose more spots by the end of the race. He wound up sixth.

"It looked like Ron didn't get going on that last restart," Sauter said.