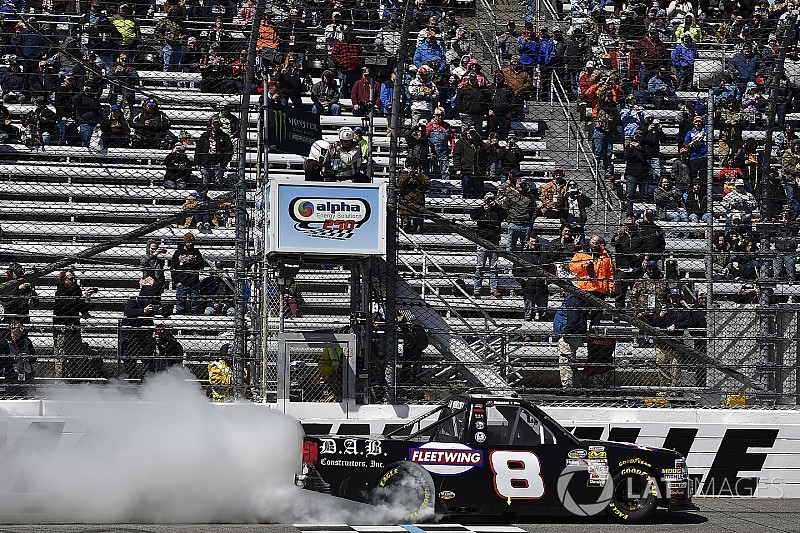 Nemechek was one of six drivers to stay out during a caution on Lap 216 of 250 and managed to hold off Kyle Benjamin to win Monday’s rain-delayed Alpha Energy Solutions 250, his first series win of the season.

Nemechek actually stayed out by accident as he didn’t hear his crew chief’s order to pit. So, remained on the track and hoped for the best.

“Tick, tock we finally got a clock,” Nemechek, 21, said from Victory Lane.

The win was his first at Martinsville and sixth of his career.

“We just had to stay out there and I didn’t know if we were going to be able to do it,” Nemechek said. “I can think everyone enough that pours their heart and soul into this deal. There are only four guys at our shop this year.

“It’s very cool to be able to come back over here to the Truck series. These guys deserve it. We finished second here multiple times. It’s going to be awesome to take that thing home.”

Benjamin, making his first series start, was able to get alongside Nemechek on the final lap but couldn’t complete the pass for the lead.

“It was pretty close right there. We had a pretty good truck on long runs and unfortunately it came down to a short run,” Benjamin said. “It’s Martinsville so I figured I needed to give him a run for his money coming off (4) there on the last lap.

“We had a great day and had a fast truck.”

After being briefly tested by Todd Gilliland, pole-winner Ben Rhodes again dominated on his way to the Stage 2 victory.

During the break between Stages 1 and 2, Stewart Friesen used a two-tire pit stop to exit pit road first and take the lead on the restart when Stage 2 went green. He was followed by Rhodes, Crafton, Sauter and Nemechek.

Following a three-wide battle for the lead, Rhodes re-established himself as the race leader and caution was displayed on Lap 87 after Friesen, Harrison Burton and Sauter were involved a wreck in Turns 1 and 2.

Gilliland appeared to nudge Sauter into Friesen to start that incident.

On the restart on Lap 93, Rhodes led the way followed by Gilliland and Sauter.

Friesen received a two-lap penalty for having too many men over the wall while he was operating under the damaged vehicle policy.

On Lap 118, Friesen got into Tyler Matthews to bring out another caution. On the restart on Lap 123, Rhodes led the way followed by Gilliland and Crafton.

Rhodes picked up where he left off when Monday’s rain-delayed race restarted and dominated on his way to the Stage 1 victory, his first of the season.

“We have some really good speed through the center of the corner,” Rhodes said during the break. “We made some adjustments that I think will make it even better.”

The start of Stage 1 actually began on Saturday afternoon but the race was halted on Lap 24 once a winter storm moved into the area around Martinsville.

Rhodes, the pole-winner, held a steady advantage from the start of the race.

Mike Senica, who had just been black-flagged by NASCAR for disobeying a request to report to the garage, spun on Lap 17 in Stage 1 to bring out the first caution.

Before the race could restart, NASCAR brought the trucks down pit road as snow and rain began covering the track with moisture.

Gilliland, who started the race from the rear of the field due to an engine change, had already advanced to 18th by the time of the red flag.

The returned to green on Lap 27 on Monday morning with Rhodes with the lead but Crafton quickly made his way around him and into the top spot. Rhodes retook the lead three laps later and quickly moved out to a sizeable lead.

Norm Benning was parked after 35 laps for failure to maintain minimum speed in the race.

Peters making the most of new NASCAR Truck opportunity