NASCAR to offer crate engines to Truck teams in 2016 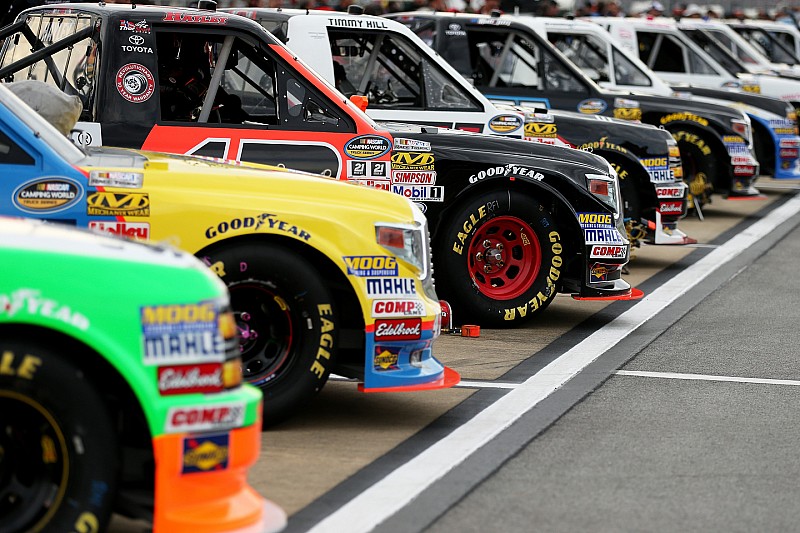 NASCAR Camping World Truck Series director Elton Sawyer confirms that his tour will offer the option of crate engines for 2016.

Sawyer confirmed truck teams will have the opportunity to use the “Delta engine” for their programs starting on May 20th at Charlotte Motor Speedway.

They understand we had a fundamental issue there with the cost of engines in the Truck series. They didn’t have a better solution so they supported this one.

Truck teams were told during a meeting with NASCAR last month that engines would be available on a lease-only basis.

“Everything looks good for a Charlotte debut,” Sawyer told Motorsport.com. “We’ve gotten great response from the industry, the teams. And we look forward to seeing it on the track in Charlotte.”

Sawyer said the tour could potentially test the engine prior to the Education Lottery 200 at CMS but nothing is set in stone. He would not comment on cost at this time or whether Mark Cronquest, formerly the chief engine builder for Joe Gibbs Racing, would be producing the engines.

Skepticism among the elite organizations

From a team standpoint, organizations with factory backing are skeptical about adopting a crate engine considering motors are the DNA of a race program.

“I do feel like it’s going to put more burden on KBM to be able to have pay for the engine bill, although the engine bill will be half of what it currently is.

“We do have engine support from Toyota right now for our current programs. If we do move to the Delta Engine program then Toyota takes away that support from us. That’s a cost that will be added back to our program.”

NASCAR currently uses a spec engine in the K&N Pro Series tour which was instituted to lower the expense of competition nearly a decade ago. Robert Yates has built the engines for that series since 2009. The cost is around $28,000 but teams can purchase kits and build their own engines. Ilmor Engineering builds spec engines for ARCA which run about $40,000 and can run 1,500 miles or 1,500 laps before a rebuild is necessary.

Sawyer says the manufacturers were “very much involved” in the decision-making process.

“They understand we had a fundamental issue there with the cost of engines in the Truck series,” Sawyer said. “They didn’t have a better solution so they supported this one.

“You can participate — or you don’t have to. As you said, it is an option for the teams but hopefully it will bring in some new growth. Teams that were not going to run all the races, this will give them an opportunity with a much-limited budget to run some races with us."

Toyota Racing Development president Dave Wilson says his Tundra teams will not be part of the Delta engine program. Wilson added that while the truck series remains close to his heart, Toyota would have to rethink its participation in the series if forced to adopt the program.

While Wilson has been in discussions with the sanctioning body over the last two seasons regarding the crate engine evolution in the NCWTS, Toyota, who has won the last three truck titles and eight of the last 10 championships, does not plan to lose its identity under the hood.

“We’ve had a lot of conversations with NASCAR as a manufacturer,” Wilson said. “We acknowledge it. We respect their decision to go in that direction but we’re going to continue to participate in the truck series with our Toyota Tundra engine.

“One of the questions is will it be embraced? And there has been an optional engine that has been approved for use in the truck series over the last couple of years. It’s been that K&N spec engine deal and it never really took off. Whether this formula takes off or not remains to be seen but Toyota will participate with Toyota engines and that will not change.”

Horsepower advantage in the new engines?

While some teams have questioned whether the Delta engines will get a bump in horsepower in an attempt to enhance potential customers, Wilson says NASCAR “has ensured all the manufacturers the (engines) will maintain performance parity”.

“We take them at their word,” Wilson added. “If that should change, we’ll cross that bridge when we come to it."

The engine was tested under competition on a limited basis during the course of the 2015 schedule. Although the engine failed in one outing, Sawyer says that’s to be expected in the normal evolution of a new part.

“With any new project in development, you’re going to have some issues,” Sawyer said. “Collectively, the stakeholders that were involved in the process, we worked through it and feel good about the engine going forwards.”