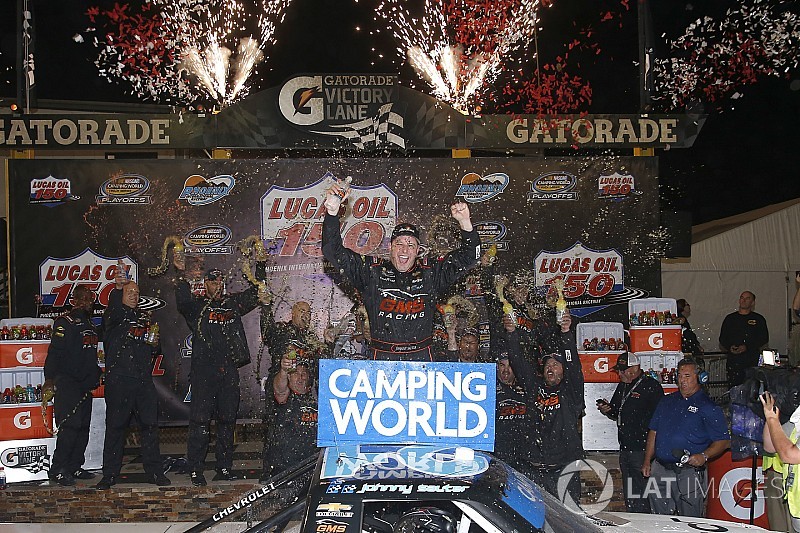 He held off John Hunter Nemechek by .688-seconds in a final two-lap shootout to decide the Lucas Oil 150.

Three red flags couldn’t slow Sauter’s path to his fourth win of 2017—and his second victory in as many weeks.

“Hell yeah,” Sauter said after scoring his 17th-career win. “Way to go. You guys are awesome. You are unbelievable. We’ve got to do this one more time.”

Bell, Crafton and Cindric locked themselves into the Championship 4 for next weekend at Homestead-Miami Speedway, along with Sauter.

“It means the world to me to put BKR in the final four,” Cindric said. “I’ve never raced at Homestead. I’ve tested there. But I’ll put my heart and soul into it.”

Despite finishing second, only a win would secure a position in the final four for Nemechek.

“Thank you guys for all your help, I appreciate it,” Nemechek told his crew. “Disappointed finishing second. That was probably the most disappointing second-place finish of my career.”

Bell held the point off of pit road. Gragson lined up second followed by Justin Haley, Dalton Sargeant, Rhodes, Kaz Grala, Sauter, Truex, Nemechek, Gilliland. Cindric dropped to 11th after the No. 19 pit crew had issues on the right-side of the truck on pit road. Cody Coughlin, Chase Briscoe, Crafton and Stewart Friesen rounded out the top 15 when the race returned to green on Lap 88.

“I’ll drive it hard and smart,” Crafton replied. “I’ll get it back up there.”

Cindric and Truex made contact in the dogleg on Lap 91. Sauter passed Rhodes for third on Lap 95. Crafton moved by Cindric for 11th one lap later.

After the first 10 laps, Gragson’s lead was .975-seconds over Bell. Haley hung onto third followed by Sauter, Rhodes, Sargeant, Grala, Nemechek and Friesen.

As the field went into Turn 1, Cindric went to the inside and Rhodes blocked him. Rhodes spun out and took out Crafton in the process. They finished 20th and 21st, respectively.

NASCAR red-flagged the race at 1:18:38 with 20 to go. The race returned to yellow following a 17-minute delay. Cindric returned to pit road for repairs and restarted 14th.

Bell took the lead from Gragson coming through Turn 3 on Lap 134. As the field followed in the dogleg, there were five trucks battling for the same real estate when Truex, Little and Sergeant collided on Lap 135 to bring out Caution 5. NASCAR red-flagged the race at 1:27:03 on Lap 136.

The 14-minute, 21-second red-flag was lifted with 14 laps to go. Bell controlled the restart on Lap 140. Gragson had the lead after the first lap with Sauter in third. Haley dropped to fourth followed by Nemechek.

With seven laps to go, Bell and Gragson were battling for the lead coming through Turn 4 when they bounced off of each other and the No.18 truck turned into Haley’s path. Bell had damage, but held the lead at the time of the caution. NASCAR displayed the third red flag at the 1.35:48-mark.

"It sucks not to win again," said Bell who led a race-high 91 laps. "But there's nothing you can do about it."

Bell for pitted for repairs on Lap 145 and took right side tires. Sauter inherited the lead with Nemechek on the outside for the Lap 148 restart. Bell lined up ninth.

Bell had a two-second lead over Gragson at the time of the wreck. Crafton, Rhodes, Cindric, Sauter, Nemechek, Gilliland, Truex and Friesen rounded out the top 10.

Bell led 72 of the first 80 laps. Sixteen cars remained on the lead lap after the first two segments.

Bell led the field to green on Lap 49. Gragson held onto second and Crafton passed Rhodes for third. Nemechek moved up to fifth followed by Cindric, Gilliland, Sauter, Truex and Stewart Friesen.

The top 10 remained the same with 15 laps to go in the second segment. Sauter caught Nemechek in the dogleg and made the pass for sixth on Lap 69.

With 10 laps to the stage end, Bell’s advantage was 1.498-seconds over Gragson. Crafton held onto third followed by Rhodes, Cindric, Sauter, Nemechek, Gilliland Truex and Friesen.

Enfinger triggered the second caution on Lap 77 after hitting the wall in Turn 1.

Bell won Stage 1 of Friday’s Lucas Oil 150—and secured a position in the Championship 4 with his win.

Bell, who started from the pole, had a 4.618-second lead over Noah Gragson after the first 40 laps.

“This thing is a dream machine right now,” Bell said. “I just have to stay after it, minimize my mistakes.”

Gragson took the lead from Bell on Lap 1. Crafton moved up to third followed by Rhodes, Nemechek, Gilliland, Cindric, Enfinger, Truex, and Sauter.

Austin Wayne Self, Mike Harmon and Jesse Little started at the rear of the field for unapproved adjustments.

Bell moved back to the lead on Lap 10. Gragson settled into second followed by Crafton, Rhodes, Nemechek, Gilliland, Cindric, Enfinger, Sauter and Truex.

The top 10 remained the same with 15 laps in the stage. Sauter caught Cindric in traffic, but couldn’t make the move. The trucks ran side-by-side on the backstretch and Sauter completed the pass for seventh on Lap 28.

With 10 laps to go in the stage, Bell extended his advantage to 3.298-seconds over Gragson. Crafton, Rhodes, Nemechek, Sauter, Gilliland, Cindric, Enfinger and Truex completed the top 10 with 17 drivers on the lead lap.

Bell had nearly a four-second lead with five laps to decide the stage. Cindric passed Gilliland for seventh with one lap to go.

Championship 4 grid set for the NASCAR Truck Series at Phoenix