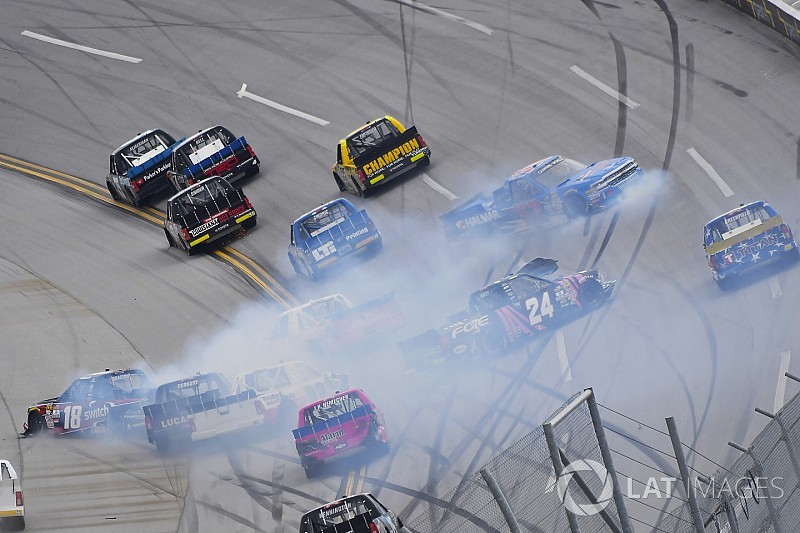 It’s been a frustrating start to the NASCAR Camping World Truck Series playoffs for John Hunter Nemechek, but the most important thing is he is still in them.

Once again, Nemechek survived an up-and-down day on the track and rallied to finish sixth in Saturday’s Fred’s 250 at Talladega (Ala.) Superspeedway – good enough to claim the final transfer spot and advance to Round 2 of the playoffs.

Nemechek, 20, was in a difficult position entering the race as he was relegated to the final spot in the playoff standings, 14 points below the cutoff line.

“I’m pretty sure we were almost in every wreck that there was today,” Nemechek said after the race. “I just can’t thank all my guys enough – they never gave up, the crew was awesome in fixing the truck.

“We got Stage points. We accomplished everything that we wanted to except for winning the Stages and winning the race. I would have much rather have had Christopher (Bell’s) day and running up front and being uneventful.

“It was almost déjà vu all over again from last year being in the same spot (in the playoffs). This year we overcame and never lost faith.”

Nemechek’s biggest issue came on Lap 54 of 95 when he was collected in a multi-truck accident in Turn 3 with Ben Rhodes, Matt Crafton, Regan Smith and Clay Greenfield.

His NEMCO Motorsports team kept him in the hunt and he narrowly avoided getting caught up in another multi-truck accident on Lap 70, but somehow emerged unscathed.

He also experienced a fuel pick-up issue under caution late in the race, but the engine never cut off and he avoided another potentially devastating problem.

“If everything went smooth in these playoffs, it would be an amazing, fantastic day,” Nemechek said. “It seems like every race through the first round of the playoffs, we’ve had trouble, whether it was running out of gas or breaking mechanical parts.

“It’s kind of how our season has been – it’s been an up-and-down season. We’ve always managed to overcome adversity during these races and that goes back to my whole team. They never give up on me and I never give up on them.”

The next round in the Truck playoffs features races at Martinsville, Va., Texas and Phoenix. Of the three, Phoenix has been Nemechek’s best track, with one top-five and three top-10 finishes in four career starts (including a second in 2015).

“I feel good about the next round,” Nemechek said. “I really like Martinsville and I think it’s tick-tock time for a clock. Phoenix has always been a really good place for us.

“As long as we don’t make mistakes and hopefully we’ve got all of our bad luck out of the way in the first round, hopefully it will be a smooth round for us and we’ll be in that final four come Homestead.”

Watch Nemecheck talk about his run on Saturday: