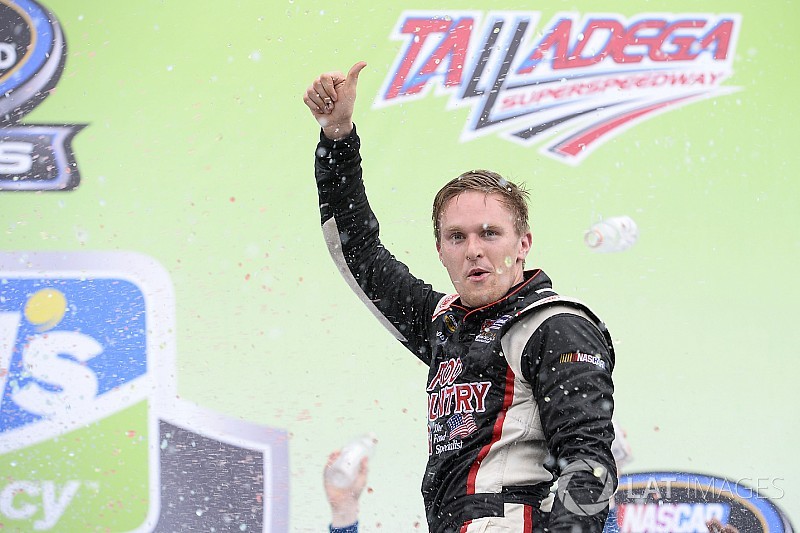 Parker Kligerman certainly makes the most of his opportunities.

In two career wins in the NASCAR Camping World Truck Series, the 27-year-old from Westport, Conn., has led a total of five laps.

Kligerman grabbed the lead from Christopher Bell with one lap remaining in overtime and claimed the win in Saturday’s Fred’s 250 at Talladega (Ala.) Superspeedway when the race was placed under caution on the final lap due to a wreck on the backstretch.

Kligerman’s only other Truck Series win came at Talladega in 2012, and as he did then, he got out of his truck after the race and planted the checkered flag in the infield grass.

The win is the second in 68 career starts for Kligerman, who also works part-time as a NASCAR TV reporter for NBC Sports.

“This is incredible,” Kligerman said in Victory Lane. “I’m out of breath, I guess I’m out of shape racing all these kids. It was just crazy that every move I tried, worked.

“Those last 10 laps, no matter if I went high and separated a pack or was trying get the bump and run, every move just worked. Sometimes, it just goes your way. We did that but it starts with having a fast truck.

“It’s an honor to be racing with this team, it’s one of the oldest in NASCAR, but to win with them is incredible.”

Saturday’s race was the conclusion of Round 1 of the series playoffs and the following drivers advanced to Round 2: Bell, Ben Rhodes, Cindric, John Hunter Nemechek, Matt Crafton and Johnny Sauter.

Chase Briscoe and Kaz Grala were both eliminated from further title contention.

“That’s just part of it, it’s just part of the situation we’re dealt in the playoffs,” said Briscoe, who was forced to the garage early in the race for repairs for a leaking valve cover. “If we run better at New Hampshire, this doesn’t happen.

“As much as this sucks right now, I still have to be grateful. I’m just fortunate to be running race cars for a living. I really wanted to get Brad (Keselowski, team owner) his first championship.”

Sauter held off Justin Hailey to complete a sweep of the first two Stages, which will also give him two additional playoff points for Round 2 of the playoffs.

“I think the biggest question mark here is whether we can go all the way to the end of the race without pitting again (for fuel),” Sauter said during the break.

Several drivers – among them Bell, Tyler Young and Noah Gragson, elected to pull down pit road right before the pits were closed with two laps remaining in the Stage.

After pit stops during the Stage break, Snider was the first off pit road but Bell, who pit earlier, cycled back to the lead to begin the final 54-lap Stage.

Sauter claimed the Stage 1 victory under caution when a four-truck incident erupted with one lap remaining in the 20-lap segment.

Rhodes, Ryan Truex, Chris Fontaine and Grala were all involved in the accident, with Grala suffering the most extensive damage, which forced him out of the race and knocked him out of the NASCAR playoffs. Truex was also unable to continue.

“That’s the end of our championship hopes, unfortunately,” Grala said in the garage.

“So far, so good,” Sauter said during the break. “We’ve got a long way to go, we just have to execute down the stretch here.”

During pit stops during the Stage break, Sauter was the first off pit road but Cindric elected not to pit and took over the race lead on the restart for Stage 2.

Gragson, who was sick and had Erik Jones standing by for him in the race, was forced to pit under green on Lap 13 with a loose left-rear wheel.

On Lap 8, Briscoe’s No. 29 Ford began smoking a lot and apparently dropping fluid. NASCAR black-flagged Briscoe and he drove his truck into the garage for repairs, but he was eventually able to return to the track.

Grala was forced to start the race from the rear of the field after his team changed the engine in his No. 33 Chevrolet following qualifying on Saturday afternoon.

Wtach highlights from the race:

Here are complete results from the race: