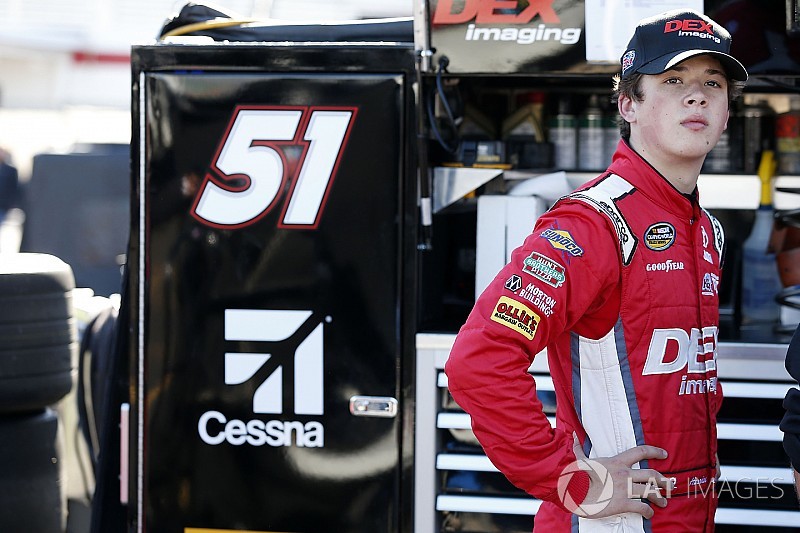 What’s next for the son of NASCAR veteran and NBC Sports TV analyst Jeff Burton? He hopes more of the same.

Burton, who won the 2017 K&N Pro Series East championship, will run an expanded schedule in the Camping World Truck Series next season with Kyle Busch Motorsports as well as several K&N Pro Series East, ARCA and Super Late Model races throughout the year.

For me, I think this is going to be the most fun I’ve had schedule-wise. I wanted to get as much experience as I could on the big tracks.

Because Burton will not turn 18 until Oct. 9, he is unable to compete fulltime in any of NASCAR’s three national series this season.

“Last year was really great, I had the most fun I’ve had in my life racing, but there is always more,” Burton told Motorsport.com. “I feel like I still have something to prove; I’m not the best that I can be.

“I can always get better. For me, I haven’t proven anything yet because every year is a new year. I’ve got to go out and perform better than I did last year. I think that approach is used by all the best athletes – enough is never enough.”

Burton will increase his Truck series races in 2018 from six to nine and is scheduled to compete at Martinsville (March and October), Dover, Iowa, Canada, Bristol, Texas, Phoenix and Homestead-Miami.

The diversity of his schedule this year allowed Burton to play a larger role in planning the races in which he will compete.

“I kind of got to pick what race tracks I’m going to race at and I’ve never had that opportunity to that. I’ve either been too young to race certain places, or too busy doing certain things, but this year it’s been awesome to be able to pick where I’m going to race,” Burton said.

“For me, I think this is going to be the most fun I’ve had schedule-wise. I wanted to get as much experience as I could on the big tracks. The sport has kind of gone to the mile-and-a-half era and bigger race tracks and for me, the hardest thing has been preparing for that.

“When the opportunity comes, you’re going to be expected to perform and held to a high standard but it’s really a completely different ballgame then what I’ve been doing. I wanted to get as much experience on tracks like those that I could.”

One area Burton would like to improve this year is his finishes in his Truck series races. In six races in 2017 with KBM he managed just one top-10 finish, but it was a career-best fourth in his final Truck race of the year at Martinsville. He finished every race and never finished worse than 18th.

“I could have done a better job in the Truck series,” Burton said. “You get in there with a place like KBM and you know if you’re slow, you know it’s you. That’s a good and bad thing. You have so much pressure on yourself. It was hard to deal with the expectations.

“That’s a culture of winning that I wasn’t quite used to and it took me a little bit to get accustomed to that. It’s a very serious business. Every race counts for the owner’s championship.

“I feel like I’m much more prepared for that this year and I really feel like I should be able to win at least one Truck race. If I don’t do that, I’ll be disappointed.”

Burton won’t have to wait long for his first race. He will attempt to defend his SpeedFest victory of a year ago at Watermelon Capital Speedway in Cordele, Ga., at the end of the month. He out-dueled Monster Energy NASCAR Cup Series driver Erik Jones to win the Super Late Model event last year.

After best season yet, Ryan Truex now looking for a job