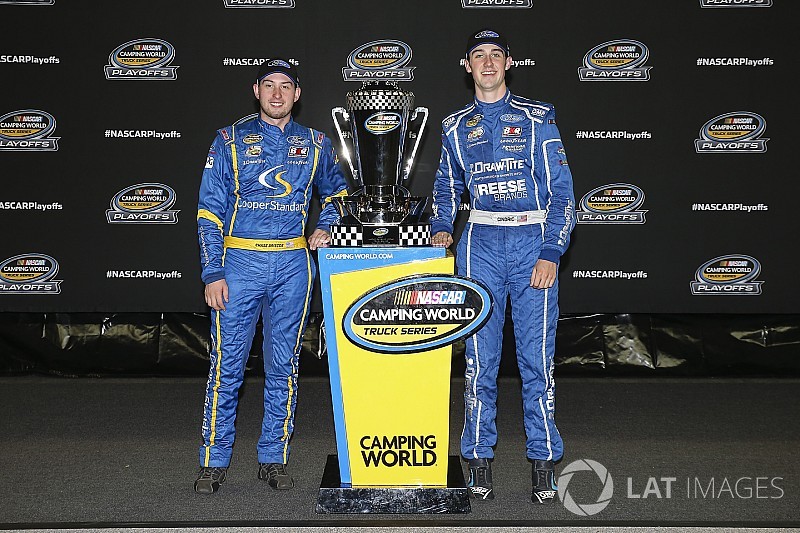 While both Chase Briscoe and Austin Cindric are laser-focused on going after their first NASCAR championship as the drivers head to Talladega Superspeedway for the first NCWTS Playoff cutoff race, they got to have a little fun recently off the track while filming videos for the team's Most Popular Driver campaign.

BKR drivers have won Most Popular Driver in two of the past three seasons, with Ryan Blaney winning in 2014 and Tyler Reddick taking home last year’s honors. Both Briscoe and Cindric are currently being featured in a series of social media content, including videos, graphics and GIFs, meant to both entertain race fans and ask for their vote in the 2017 NASCAR Most Popular Driver contest, and the drivers shared their thoughts on making the videos.

“Making the videos was definitely a new experience for me,” said Briscoe. “There was a little acting involved and we had fun shooting them. I feel like we got to show people a less-serious side of the drivers and team. Hopefully the fans will enjoy them.”

While the experience was also new to Cindric, he thought the opportunity to display who he is away from the race track was fun.

“It was a nice change in direction going to the shop and being able to show our personalities and be part of an environment you don’t get to experience too much,” said Cindric. “I feel making these funny videos will help our chances of getting more votes, and hopefully one of us will bring home the award.”

The videos are produced and directed by veteran and award-winning NASCAR videographer and producer Matthew Dillner, who also produced the videos that helped Reddick win the prestigious honor last season.

“Working with Chase and Austin has been fantastic and hilarious,” said Dillner. “It was interesting to see the dynamics of the drivers and the BKR staff working together on this project and showing a different side of the drivers to the fans. It was a lot of fun.”

Last year, the series of videos carried a feel of what was going on in United States politics and the presidential election with the Most Popular Driver Debates. This year, the videos are a series of commercial and infomercial spoofs, drawing inspiration from everything from the Snuggie, bad infomercial acting, heartwrenching ASPCA ads and bad car dealership commercials, many capitalizing on the fact that both drivers are in their first year of full-time competition in the NASCAR Camping World Truck Series.

"When I started at BKR last year, Brad made a point of telling us how imporant it was to him to give our drivers a chance to win Most Popular Driver," said Jessica Trippy, one of BKR's PR representatives. "Last year's videos were a lot of fun, both for the team and the fans, and ultimately were successful, with Tyler Reddick bringing home the award. With this being the team's last season, it is even more important for BKR to go out with a bang. We want to not only earn one of our drivers the trophy, but to also create some funny, memorable content, raise the bar in how teams in our series participate in the campaign, and reference back to both the team's history and  the fun we had with last year's videos. We have been very fortunate to work for a team that values the award and provided us with the resources and creative liberty to come up with these campaigns. We feel like we really took advantage of our drivers' personalities and sense of humor, and we really hope that fans respond to that again this year."

“Our goal is for fans to look at these videos and laugh and enjoy them,” added Dillner. “Fans will probably laugh and shake their heads at the same time.”

The team has already released two videos, which can be seen on the team's Twitter (@TeamBKR) and Facebook (Brad Keselowski Racing),  and all of the videos, including last year's campaign, can be watched on the team's YouTube channel (www.YouTube.com/BradKeselowskiRacing). Fans can cast their votes for Chase Briscoe and Austin Cindric's at www.TeamBKR.com/Vote.

While the rookie drivers had fun and enjoyed the experience of making the videos and encouraging fans to vote for them in the Most Popular Driver contest, it will be back to business this weekend in the fred’s 250 at Talladega Superspeedway.