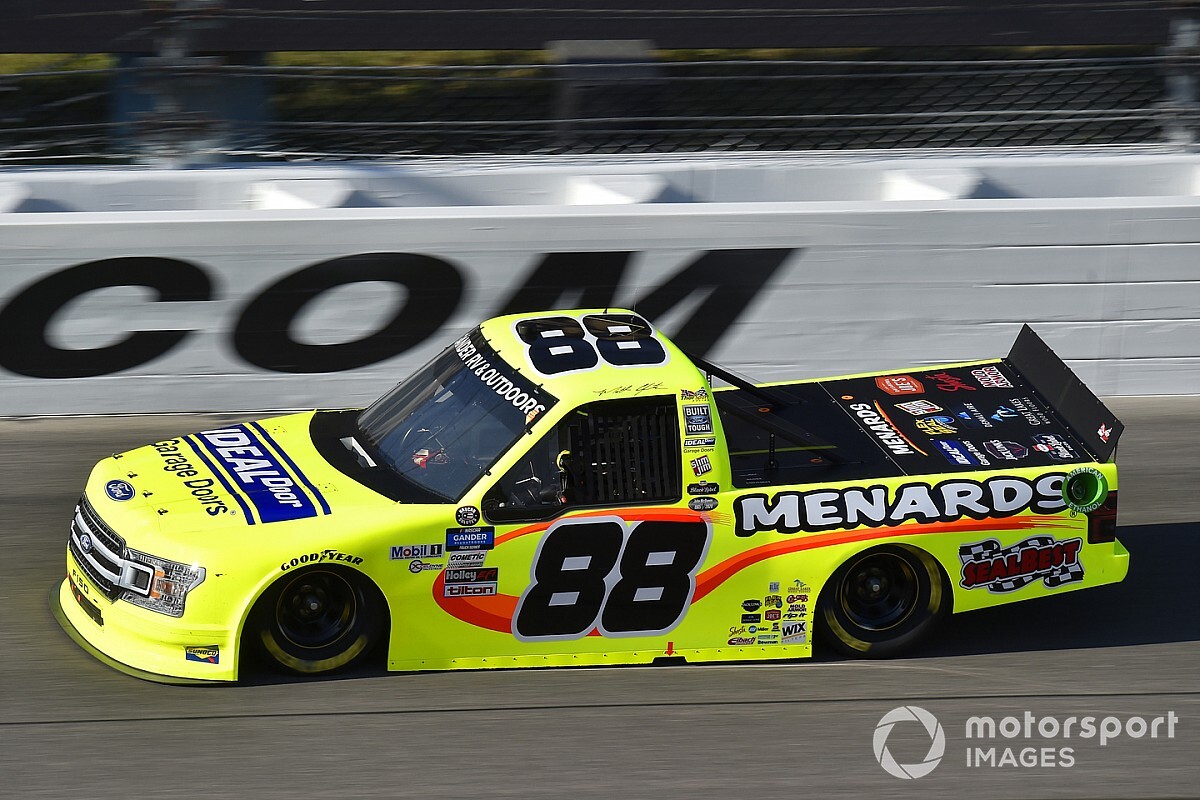 Matt Crafton held off a charging Christian Eckes for his first NASCAR Truck Series victory in over three years.

Crafton, despite his status as the reigning series champion, entered Saturday's race with a glaring winless streak. He put an end to that, winning for the 15th time in his career with Eckes just missing out on his first victory.

"Oh, it was very, very sweet," said Crafton post-race. "Not a lot of give up in these guys, without a doubt. This Menards Ford was really good all day. It was good on that last run as well. The No. 18 (Eckes) had a little bit of speed. He was making me nervous right there. I kept trying to take his line away from him and make him tight and loose. At the end of the day, I can't thank these guys enough for working so hard each and every week on this thing."

Chase Purdy led the field to the green flag to start the race, but was quickly overtaken by Eckes.

Eckes’ time out front was short-lived as Zane Smith got around him and the KBM driver had to deal with a black trash bag caught on his hood pins. It eventually came off on its own.

Travis Pastrana, making his first Truck Series start since 2017, was forced to pit with a flat tire and fell two laps down.

Smith captured the Stage 1 win with Moffitt just under one second back. Crafton, Eckes, Jones, Poole, Purdy, Gilliland, Lessard and Kraus rounded out the top-ten.

Austin Hill and Ben Rhodes opted to take two tires, pushing Smith back to third off pit road. Johnny Sauter was sent to the rear for a speeding penalty.

Hill led the way at the restart, but Smith quickly snatched back the top spot.

Gray then scrubbed the wall, but the race remained green until a spin for Bryan Dauzat out of Turn 2 forced a yellow.

The race resumed with 14 laps to go in the stage. Ankrum nearly lost it as the field went four-wide during the restart, but he held onto it.

Crafton tried chasing down the race lead, but to no avail as Smith took yet another stage win. Crafton was second, followed by Moffitt, Creed, Kraus, Ankru, Hill, Purdy, Eckes and Gilliland.

Stewart Friesen won the race off pit road with fuel-only call, but it did not work out as he fell back on the restart.

Brett Moffitt took the lead, but was passed by teammate Creed on Lap 72 with an impressive move to the inside.

Pastrana then brought out the yellow as he spun through the infield exiting Turn 4. He went on to finish 22nd.

The following run was brief as Derek Kraus spun out of Turn 2 on the restart. Cory Roper spun as well in an effort to avoid and slammed the inside wall on the backstretch.

Some trucks took the caution period as an opportunity to pit, led by Sheldon Creed and Crafton.

On the restart, a massive crash ensued as Clay Greenfield spun off the nose of Gray. Greenfield collected Spencer Davis, Johnny Sauter, Jennifer Jo Cobb, Natlie Decker, Ty Majeski, Cody Rohrbaugh, Robby Lyons and the red flag was displayed to clean up the incident. Creed appears to get hit in the rear-end during the wreck as well.

As the race returned to yellow-flag conditions, Moffitt led most of the field down pit road.

Gray led the way for the Lap 88 restart, but Creed resumed control with a three-wide pass to the inside.

As three GMS trucks battled back in the field, things went awry as Smith hooked teammate Ankrum, sending him up into Moffitt in another team truck. Both Ankrum and Moffitt were unable to continue.

The race went back green with 35 laps to go. Hill worked the outside and cleared Creed for the race lead. Creed was able to fight back, only to hit the outside wall and fall back.

The caution flew once more as Lessard slowed with a cut left rear tire.

Creed got into the wall again and the caution flew for the ninth time as another truck stopped on the apron.

The battle for the win came down to Crafton and Eckes as the veteran driver held off the young gun for the checkered flag.