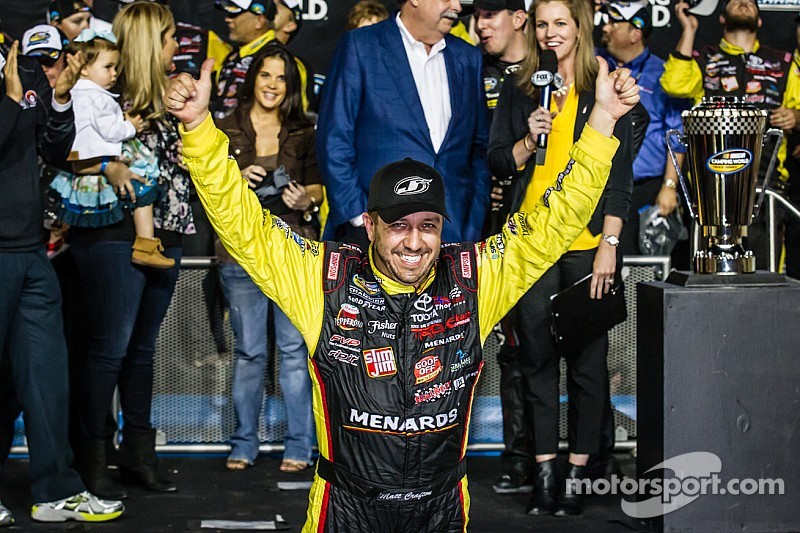 “Definitely an awesome feeling,” Crafton said, after joining Ron Hornaday Jr., Todd Bodine and Jack Sprague as the only drivers to win the NCWTS crown more than once. “To be on the list with those guys is unreal. To say that I’ve done it back-to-back and no one has done that, it’s such a good, good feeling.”

But Crafton, sitting between crew chief (Carl) Junior Joiner and ThorSport Racing General Manager David Pepper, wasn’t about to take all the credit.

“To say I made history is definitely very, very cool. But it’s all about the guys that are behind me. Without them, I’m just an average race car driver at best.”

“The very first time I sat down with Duke at the end of 2000 he told me going to run this like a business,” Crafton recalled. “He said: ‘We’re going to make it better and better each year but I’m not going to outspend myself or go away in two or three years. I’m going to be an owner who will be around for the long haul. If you want to stick it out with me, we’ll win races and win championships.’”

Stick it out, Crafton did. He didn’t win a race until 2008, finished no higher than fifth in the point standings until 2009 and didn’t win two races in a season until this year when he triumphed at Martinsville and Texas. Friday night was his 14th top five in 22 races.

“That’s what makes it so much sweeter to be where we are today,” Crafton said. “We didn’t have all the resources and all the tools that we have today. I’d say (Duke) has been a man of his word – as has Rhonda – since the day I met him.”

Crafton said that after winning his first title a year ago, he promised Joiner the team would lead more laps and win more races in 2014.

“We led 10 more laps and won two races,” he said. “We had the capability to win more if we didn’t have bad luck in the middle part of the season. It’s a damn shame, because I feel we should have won at least five races, without a doubt.”

But Crafton is hardly complaining.

Crafton entered Friday’s EcoBoost 200 with a relatively comfortable 25-point lead on Ryan Blaney. He knew that a finish of 21st or better in the 36-truck field would get the job done.

He finished ninth, good enough to finish 21 points ahead of Blaney, who persevered for a fifth-place finish despite finishing the race with vise-grips replacing his broken shifter.

He also raced cautiously throughout the first half of the race, maintaining a low line to keep a safe distance from the wall while maintaining his spot within the top 10.

Any hope Blaney had virtually disintegrated during the fourth caution period of the race. The 20-year-old, who had been running second for much of the early going, suffered that shifter problem and dropped all the way to 15th on the restart.

“That was one of the worst trucks we’ve had all year,” Blaney said. “I can’t believe we (managed to) finish fifth. That was tough.”

Kyle Larson led 96 of the first 100 laps and ended up chasing Kyle Busch Motorsports driver Bubba Wallace to the finish line in the closing laps. Wallace, driving the No. 54 Tundra, was thrilled to finally “beat the boss.”

Kyle Busch Motorsports captured its third NCWTS owner's championship in five seasons (second consecutively). Erik Jones made 12 starts and Busch drove 10 races in the No. 51 Toyota Tundra, which edged ThorSport and Crafton for the owner’s title by 24 points.

“It’s a great milestone for us,” said Busch, who is ineligible to race for the driver’s championship because he is a full-time NASCAR Sprint Cup Series competitor. “It’s what we can race for. We’ve had a lot of people come to KBM to work who have stayed a long time. Some move on to other things. That’s really what the Truck Series is all about: a proving ground and a growing series.”

Wallace’s victory gave KBM 14 wins for the season and provided Toyota with 18 triumphs, tying Chevrolet’s 2010 mark for most wins in a single season.

Ben Kennedy was named NCWTS Sunoco Rookie of the Year, despite settling for 17th in his No. 31 Chevrolet.

“We weren’t really all that great tonight,” Kennedy said, “but it pays off for the whole season we put together. It’s a testament to this team and how hard the guys at Turner Scott Motorsports worked. When we were on, we were really on – up there with the top dogs. When we were off, we struggled a little bit, but we worked hard and we worked together to make the most out of each position and each lap.”

Kennedy held off Tyler Reddick (sixth in his No. 19 Ford on Friday) for the Sunoco Rookie of the Year honors, based in part on each team’s 14 best finishes of the season

Champions are crowned at Homestead

German Quiroga, a Mexican racer fighting to make it in the world of NASCAR